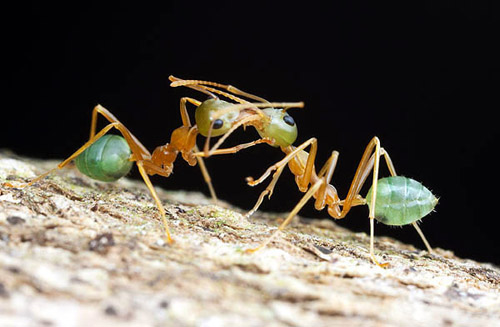 Is Humanity evolving into something new?

What if all of humanity will function as a single organism, whereas individual human beings function as the cells of that organism?

The more intelligent the system is the more freedom of action it requires… and the more it provides to its parts.

What does it mean?

How is the Internet similar to the human brain?

What if people are linked to one another by a giant worldwide computer network, will they work together in a brain-like way?

To me the thought of implanting something like a biochip in my head is not so strange. It would not be so strange for a lot of people, I think. We will all be connected directly to the Internet via a neural implant, so that the Internet “would become seamlessly part of us, as natural and simple to use as our own hands.” World Wide Mind.

The internet keeps growing in what seems to be a self-regulatory system. It is not a conscious process; it is simply a collection of feedback loops, all working to optimize humanity as a superorganism. Is the Internet becoming a kind of worldwide brain?

If we compare the internet to the human brain, then we get to see that it is the most important part of the body, in that sense that at all times oxygen must arrive there as to make sure the organism could survive. Therefore, the internet can’t be stopped, not now and not ever.

Can you imagine a brain that keeps growing and expending?

Studying the Human brains can surely help us build new fast and efficient computers and network systems, as well as allowing us to learn far more about how the internet could work in the future.

Which parts of the brain’s anatomy we find in the internet:

Wikipedia is a main part where we store the collective knowledge. (Regulated and resemble the long term memory)

Google is a main part that links us to our collective memory of knowledge.

Facebook/Instagram is a main part where we store our collective memory of experiences.

How the internet feels? These emotions can be felt at any given time on blogs and social media as what humanity feels regarding various topics, such as the run for the presidency in the US, a natural disaster, war etc.

The term superorganism is used most often to describe a social unit of eusocial animals, where division of labour is highly specialised and where individuals are not able to survive by themselves for extended periods.

In modern society, increasingly, individual people are less and less able to function independently – we rely on the superorganism to feed, clothe and power our many tools, to inform and heal us, even to help us reproduce through surrogacy or IVF. In coming decades, it is likely that access to the internet will have reached almost every part of the globe and, as we become more cohesive as a networked society, individuals who remain outside of the new superorganism will find themselves isolated culturally and technologically from what it means to be human.

Superorganisms exhibit a form of “distributed intelligence”, a system in which many individual agents with limited intelligence and information are able to pool resources to accomplish a goal beyond the capabilities of the individuals.

Given time the internet system learns to receive, to process and take action faster and faster. This is a bio-cultural evolution; whereas unlike any living organism that we know of, which is limited in time and space the super brain of Humanity will not limit itself in time and space.

What is the connection between the future astronaut explorers and sperm cells?

Knowing that our brains are designed to run our bodies, then The Internet and the Web obviously be designed not only to store, process and carry information but also to spread humanity to more and more planets. See it as a way humanity is able to move, inhabit and self-reproduce on a cosmic scale.

What type of thoughts you wish for the Global Brain to have? How do we make it more moral?

If you can dream it then you can create it. What type of dreams you like the Global Brain to have?

We know that the egg prior the chicken, what about men and G-d?

And men (re)created G-d and… The devil

By identifying the forces which are vital to society’s survival, such as altruism, universal values, sustainability and global mindset, the superorganism could grow and stay intact as it evolves.

By viewing human society as altruistic we can provide illumination to many questions, and look at ourselves in a new light.  And hopefully the discoveries of such an approach can help to aid us in attaining a better understanding of ourselves, and perhaps enable us to provide some good to the world in the many challenges we face.

We are in the process of forming an interdependent global society with a set of shared beliefs and universal values – a “civilization of ideas” – that will transform Earth into a more equitable and ecologically curated planet. It’s an optimistic view of humanity, based on the fact that most people want to get on with each other and look after their neighborhoods environment.