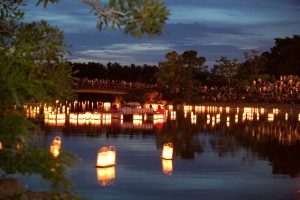 The Morikami Museum and Japanese Gardens in Delray Beach has celebrated its 34th annual Bon Festival on August 13th, 2011. Despite of stormy humid weather, 9,000 attended to enjoy the festivity. This year’s bon festival was dedicated for 3/11/11 Japan Earthquake and Tsunami victims as well. Donations for Japan Relief was collected via ticket sales. Ms. Kizzy Sanchez-Sherven, Director of Marketing & Events of Morikami commented, “We are thrilled that this year’s Bon Festival saw more visitors than ever before, especially since this year was particularly meaningful as we honored the victims of the recent Japan earthquake and tsunami with a dedicated Shoryobune during the Shoryou Nagashi ceremony”.

お盆 – Obon is Japanese mid summer ritual to commemorate ancestors and departed love ones.  According to the Buddhism, it is believed that every year during Obon, the ancestors’ spirits return to visit living relatives. Obon is celebrated from the 13th to the 15th day of the 7th month of the year according to ancient lunar calendar, which falls into the mid August in solar calendar.  It is celebrated mostly in mid August, but in some regions in July. During the three-days event,  people hang lanterns in front of houses to guide the spirit.  Inside houses, Bon-dana, the altar decorated with flowers, lanterns, memorabilia, food and sake, is prepared to welcome the spirits. Visiting graves is another ritual. Every communities in Japan has Bon Festival regardless in the scale.

The customs for festivity vary from region to region, but no Obon is completed without Bon odori- bon dances. Bon Odori has over 500 years history in Japan. The origin goes back to Kamakura era when Buddhism has widely spread among ordinary citizens. New Buddhism movement called, “Kamakura Bukkyou” was established.  To make the sutra easier to understand for anyone,  chanting and dancing were incorporated. Just like a folklore story telling, Bon Odori is a  “folk art” handed down from many generations and  eventually established original art form.  Unlike other traditional Japanese dance, Bon Dance has repetitive simple choreography so that even young children can learn quickly by mimicking movement.  There are over 500 different styles of Bon Odori reflecting the regional characteristic in Japan. In modern time after WW II, many new dances have been continuously created adapting even poplar musics.

At the Morikami’s Bon festival, a local traditional Japanese dance group, Chitose-kai and the Japan-America Society of Southern Florida have been presenting  authentic Bon Dance from various regions last 34 years. While a taiko drummer keeps rhythm on Yagura – the bandstand tower, dancers in Yukata, summer time kimono gracefully dance around the foot of Yagura.  Mrs. Chieko Mihori is the leader of Chitose kai as well as a prominent member of Japanese community in Florida.  The name of group, Chitose kai was named after her title of Fujima style Master, Chitose Fujima. She is the expert of Japanese traditional culture. She holds certifications of instructor from the Omote Senke tea ceremony school, the Sogetsu flower arrangement school and the Fujima Classical Japanese dance school. She also serves as the Vice President Cultural Affairs of the Morikami Museum and Japanese Garden. Her husband and she founded the Japan-America Society of South Florida and have been dedicating their lives to promote Japanese heritage in Florida since they move from Japan in 1957. 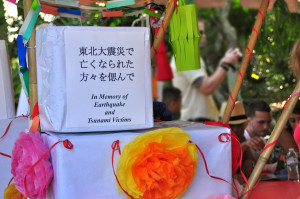 Delray Beach and Miyazu city in Kyoto, Japan became the sister-city in 1977 honoring George Sukeji Morikami who was born in MIyazu who donated 200 acres of his land to Palm County in the mid 1970s. The Morikami Museum and Japanese Garden was built on the land where his house and farm located. On June 25th, 1977, the first Bon festival at the Morikami was held to celebrate inauguration of sister-city by JASSF’s funding. Mrs. Mihori recalled the first bon festival and commented in her quiet tone, “We honored him and Miyazu city by dancing bon dance – Miyazu bushi  at the first bon festival. It started much simpler festival than what we have now, but I feel very content to see that the event has been growing each year. Being a professional classical dancer, I had never participated in bon dance in Japan, yet I was given opportunity to present this folk art here in America. All members practice very hard to showcase beauty of bon dance. I would like to continue to build the bridge over American and Japan through presentation of  richness of our cultural heritage.” Dozen of dedicated members from South and Central Florida practice once a week from May to prepare for Bon festival. This year, they presented eleven different bon dances from various regions including “Nippon Daiko (Japanese drum)” choreographed by herself in three shows. At the end of the second and third shows, audiences were encouraged to join to dance along.

Every year, Fushudaiko, a local Japanese drumming group ignited the festival with thundering sound of taiko and also played Bon daiko. Ben Miller of Fushudaiko commented on his personal challenge of playing Bon daiko.  “Playing Bon daiko for Sensei Mihori and her dancers is always a great honor and challenge for me.  Fushu Daiko holds Sensei Mihori in the utmost regard and respect.The Bon daiko rhythms are not at all like common western rhythms. The feel of the Bon odori music, and nihon daiko for that matter, breathes and stretches like the wind. It was a great lesson when my first taiko Sensei Hideki Matsuda told me to stop listening for a groove and rather to watch the dancers’ feet touch and weight drop. Then the dancers’ bodies began to lead my drum beats. This year we arranged a series of Bon “style” rhythms for our taiko team. I felt that as a taiko dojo it was important and joyful to teach, as Bon daiko could be considered the epitome of taiko as a Japanese folk art. We were all looking forward playing it that day. I am determined to continue my learning and exploration of Bon daiko. It is so much fun and challenging to play. “ 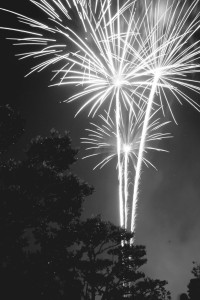 Thunder storm approached at the end of the festival, but the organizer managed releasing 850 floating lanterns with personal messages into the Morikami Lake.  Shoryounagashi is closing ritual of Bon festival in Miyagi region to guide spirits back into their world. Collaboration of fire work and thunder gave a grand finale to the Bon festival 2011. As people believe in Japan, all visiting sprits were sent back peacefully as well as satisfied visitors.