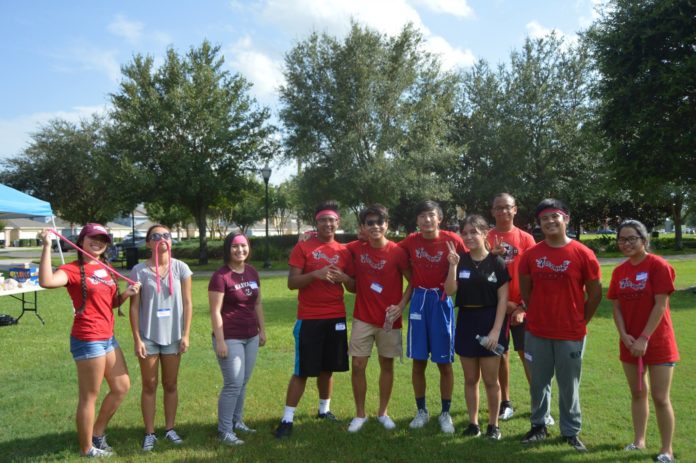 It all started with a question.  This past January, I sat across the table from REACH of Central Florida’s senior adviser as she asked me, “We have a lot of different events for REACH members to volunteer at.  If you could add any event to the ones we already do, what would it be?”

I shifted in my seat as I thought about the question.  “I’d add a social event for REACH members to get to know REACH members better and recruit new members.  We have a lot of volunteering opportunities for our members and cultural events for people to learn about Asian heritage, but we really don’t know each other that well, especially because we have such a big group.” Seven months later, on August 6th, forty REACH members & officers gathered together one hot Sunday afternoon in Avalon Park for the first REACH-Out Field Day.  Upbeat music played over the speakers as officers set up tables, tents, and games.  Once registration began, many of the attendees, including six new REACH members, signed the REACH-Out Field Day poster to celebrate this new event.

Before we started the games, REACH’s senior officers introduced the executive board of REACH and recognized those who helped to plan the different aspects of the event.  I had never planned a completely new event before, and I was amazed at the details and number of people that went into making an event happen. It was definitely a great experience to see how one idea became reality over the course of several months. REACH members enjoyed the event by taking part in games planned by officers ranging from simple icebreakers to more complex games such as obstacle courses and relay races, complete with obstacles to wiggle under and wet sponges to carry along the way.  As officers divided members up into teams, we passed out t-shirt strips in multiple colors to encourage some friendly competition.

After running through obstacle courses, struggling to pull the rope during tug-of-war, and being tied to four other people to compete in the six-legged race, members were more than ready for hot dogs, watermelon, and chips as they laughed over the bruises from the rope and wet sponges from the obstacle course. The sun set as officers wiped tables, threw away trash, and packed up supplies.  While this might have been an untraditional field day, it was a great way to recruit new members and allow officers and members to get to know one another better before school started.

Thank you to all the officers who were so willing to come together and plan this event, and to the REACH officer graduates who came to support us before they went off to college!

Community is defined as a feeling of fellowship with others, as a result of sharing common attitudes, interests, and goals.

As summer winds down and schools start back up, REACH of Central Florida held one last event to not only commemorate the summer, but also to bring the community together like never before. Last weekend REACH held their annual social event, however this year was quite different than the last. Instead of a Bowling Event like previous years, it was decided that a Field Day was to occur instead. This event focused on creating new bonds and friendships between students in Orlando who had not met before and therefore creating a new sense of community with those around them. The event began on August 6th at Avalon Park. Volunteers recruited by some of the officers arrived early to help set up on the beautiful Sunday afternoon. Working in the sun, volunteers set up tables, tents, and prepared games for the impending Field Day. As one of the Game Coordinators myself, I can say that setting up the games was one of the more difficult parts of the setup, but the volunteers were an immense help!

As set up came to a close, more and more people arrived to sign in to the event. Attendees came from a total of 12 different schools! After they had signed in, they received a name tag to identify themselves to new people and signed a poster to help remember the event. After everyone had arrived, the President of REACH, Sarah Joe, introduced the board of officers of the organization along with those who helped put together the event. The Field Day was now underway. The Game Coordinators then began the games, starting with three different Ice Breaker games which allowed for people to learn everyone’s name and meet people they may not have known before.

The Ice Breaker games concluded and the real competition began. The attendees were randomly split into four different teams to compete in different games with their peers. Games like Tug-of-War and the Number Legged Races were some of the funniest to watch! Having the teams compete and work with one another not only helped them win, but also to provide a sense of community, which is what we set out to accomplish. The final game of the day was the Pass-the-Sponge Obstacle Race. Players had to run, jump, and crawl through obstacles to transfer water to buckets with the large sponges that were provided. In the end, the Pink Team came out with the win after a day of friendly competition. Exhausted, players from all teams as well as officers in charge of the games enjoyed hot dogs, pasta, and watermelon. Attendees laughed with their newfound friends and ate some delicious food. Volunteers then helped to clean up the event, taking down the tents, cleaning up games, and throwing away trash to help keep Avalon park as beautiful as it was when we first arrived there.

REACH of Central Florida set out on this event to bring the community together and provide a sense of unity within the area, and this event provided the perfect medium to do just that. The Screaming in my head – Ellen, Bush, and the Iraq War