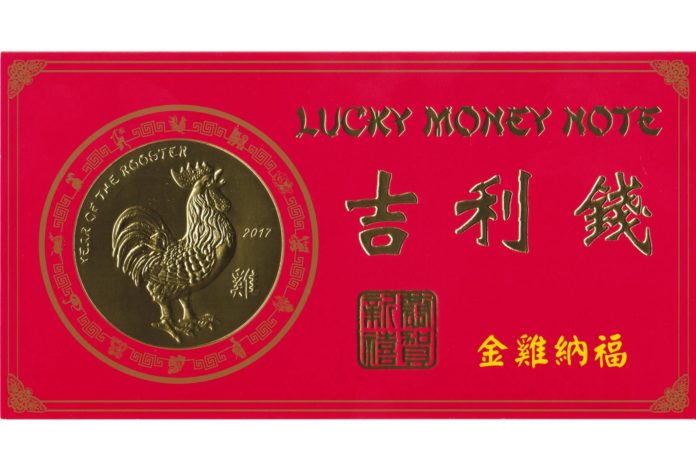 Leonard Olijar, Director of the Bureau of Engraving and Printing has unveiled the latest version of its “Lucky Money” series to celebrate the upcoming Year of the Rooster. The lucky money will have auspicious serial numbers and packaged to celebrate the Chinese New Year.  The Year of the Rooster 2017 $1 Federal Reserve note with a serial number beginning with “8888.”

The rooster is one of 12 zodiac signs associated with the Chinese Lunar Calendar. The Year of the Rooster 2017 edition, part of BEP’s Lucky Money Collection started 16 years ago, is designed with decorative Chinese symbolism and packaged in a symbolic red folder with embossed gold foil.

The rooster occupies the 10th position in the Chinese Zodiac cycle. The upcoming Year of the Rooster starts on Jan 28, 2017, and the celebration usually lasts 15 days until the Lantern Festival on Feb 11.

Olijar described the Year of the Rooster 2017 product as a continuation of the bureau’s highly successful Lucky Money Collection. It is the fourth issue from BEP’s second generation Lucky Money Lunar Calendar product line. In total, BEP has released 28 products and sold more than 1.8 million items from this collection.

The products are sold out now on the www.moneyfactorystore.gov. BEP is offering 88,888 Year of the Rooster 2017 products. They cost just $5.95 each when buying fewer than 50. But you can find it on the ebay.com

So far, it is the only lucky money BEP has issued, and there have been no other countries contacting the BEP for similar products.