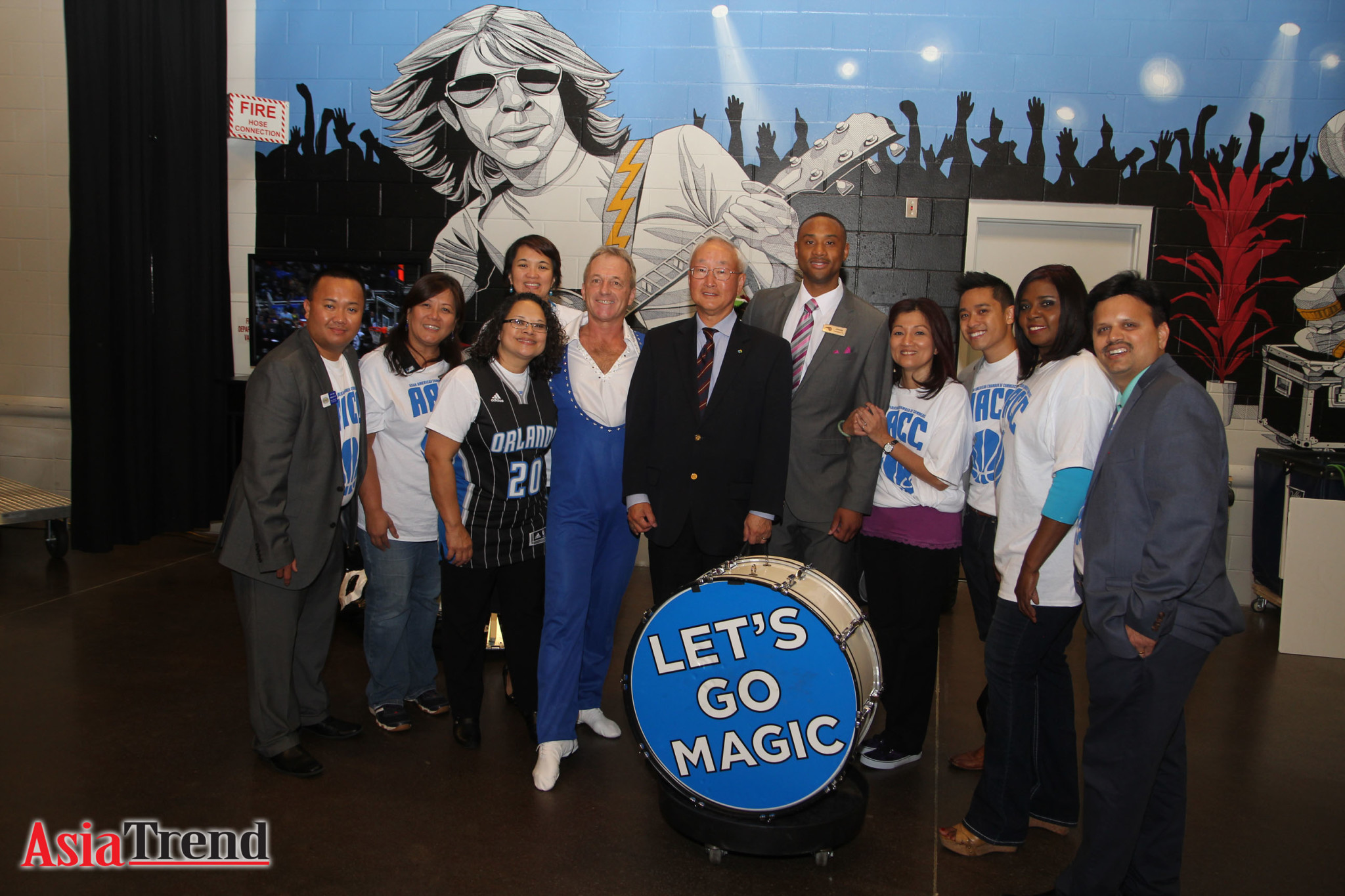 Hundreds of Magic Fans from the Asian community of Greater Orlando converged on the Amway Center on March 27, 2015, for Asian American Night – A Celebration of Diversity organized by the Asian American Chamber of Commerce of Central Florida.

Festivities included a vibrant display of Asian culture featuring the talents of the Orlando Taiko Dojo drummers inside the Amway Center atrium along with the Fresh Off the Beat hip-hop team, which traces its roots to the University of Central Florida Filipino Student Association, on the main court for a pre-game dance.

From the ticket specials to the performances, to the game day T-shirts to the signs translating Pure Magic in five languages, the AACC event would not have been possible without the support of Asia Trend and AACC President-Elect Khalid Muneer’s Jupiter Properties. Coordinating the night was Orlando Magic corporate team member Jimmy Missouri, account executive.

More than two dozen Asian community youth were on court and on the jumbo screen for the national anthem as well as the “tunnel” to greet the players. Honorary game captains of the day were AACC President Gail Rayos and Director/ Asian Night Co-Chair Kannan Srinivasan. Fans of the day counting down to tip-off were AACC Vice President Don Nguyen and Director/Asian Night Co-Chair Joed ‘Jose’ Fabricante. Rounding out the “High-Five” fans were Treasurer Vi Ma, Financial Reviewer Ann Catris, Secretary Maria Aguilar, Director Dahlia Hayles of the Chamber.

The night was made even more special because it also was a celebration of the induction into the Orlando Magic Hall of Fame of NBA great Shaquille O’Neal. In 1992, Shaq was the No. 1 overall NBA draft pick when he came to the Magic.

Under the direction of Orlando Magic Vice President of Community Relations and Government Affairs Linda Landman-Gonzalez, the Asian American Chamber of Commerce is a proud community partner of The Orlando Magic, working together to celebrate diversity in Orlando.

Half-time was the opportunity to recognize AACC’s own champion – C.T. Hsu, a past president of AACC and the founder of his own architectural firm. The Chamber honored the 2014 Lifetime Achievement Award Winner in front of the Amway crowd.

As one of the first Asian entrepreneurs in Greater Orlando, he founded C.T. Hsu + Associates in 1984 with the vision of building a firm that embodies architectural excellence and gives back to the community.

“C.T.’s projects span the globe. But he is best known for his contribution to many iconic buildings in Central Florida – including his design work as part of the innovative and state-of-the art Amway Center,” said Gail Rayos, AACC President. “So it is only fitting to honor him during a Magic game, recognizing that C.T.’s enduring contributions to the Greater Orlando area truly embody the Asian Chamber’s motto to Dream, Believe, Achieve!”