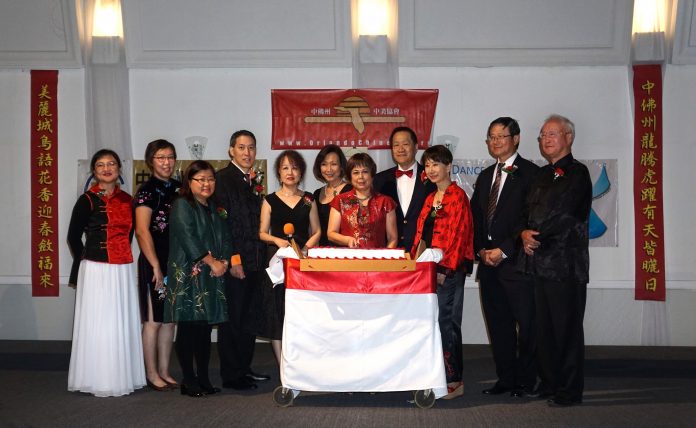 The past few weeks have marked the beginning of the Lunar New Year, a cultural holiday enjoyed annually by millions of people around the world. Here in Central Florida, we have numerous events planned to celebrate the festivities, including the Vietnamese New Year (TET) Festival and the Dragon Parade and Lunar New Year Festival, among others. On Saturday, February 9th, 2019, the local Chinese community came together to not only celebrate the Year of the Pig, but also the 50th Anniversary of the Chinese American Association of Central Florida (CAACF).

At the venue, Enchanted Night, located in Orlando, volunteers helped decorate and set up the event hours in advance to turn the empty catering hall into a formal reception suitable for the important attendants of the night.

Upon arriving at the venue, guests were received at the front desk, then taken to their seats by escorts. From there, they could help themselves to the lavish selection of dishes provided by Hao Wah Asian Cuisine, a restaurant and catering business based in Tampa.

During the award ceremonies, CAACF was honored with proclamations from both the City of Orlando Mayor Buddy Dyer and Orange County Mayor Jerry L. Demings. Both proclamations declared Saturday, February 9th, 2019 as Chinese American Association of Central Florida Day, honoring the “resourceful and hardworking citizens contributing to the process of our regent and unique blend of culture” of the Chinese American community.

Commissioner Mayra Uribe presented Demings’ proclamation commemorating CAACF’s contribution to cultural diversity in Central Florida. “I remember as a child, when my parents came to this country, they worked very hard to fulfill the American dream, but most importantly they never made me forget our culture and where we came from,” Uribe began. “We embraced our music, our food, and our history, and we celebrated so many things […] The Chinese culture, though, is important in our society – for your food, your history, your technology, your traditions – you make us [sic] a better place to live.”

These achievements magnify how far this organization has come. Before its enormous success and state-wide recognition, CAACF came from humble beginnings.

In 1969, the first CAACF President Wing Chin held a group meeting at his house to address a terrible incident that involved a foreign Taiwanese sailor. “This sailor, who spoke no English, jumped ship and was wandering around Lake County areas when he was picked up by the police,” says Chin. “Due to unknown reasons, the sailor hung himself while in custody of the police before I or any other Chinese was able to assist him.”

This first social gathering of the local Chinese became the beginning of CAACF.

Later additions to CAACF, such as the Chinese School and the Dance Troupe (both established in 1980) and CHARGE Dragon Boat team (2010), have all become successful organizations, as well.

More recently, Orlando Sentinel writer Jeff Kunerth reflected upon the growth of the Chinese community through Chin’s perspective in his article about the Dragon Lunar New Year Parade of 2013.  He wrote, “For the 85-year-old Chin, who moved to Orlando in 1968, the parade was like watching the growth of Orlando’s Asian community pass before his eyes.” Kunerth states that while there were only a handful of Asians living in Central Florida in the early sixties, there are more than 79,000 Asians in the metropolitan area of Lake, Orange, Osceola and Seminole counties today.

Thanks to the neverending support of the local Chinese people, the Chinese American Association of Central Florida has expanded tremendously over the past 50 years, and, hopefully, it will continue to do so for generations to come.