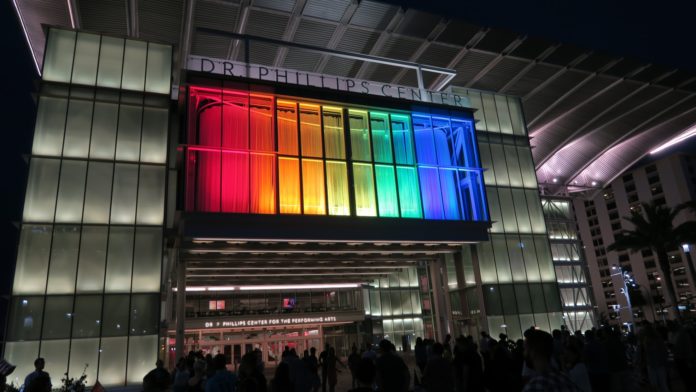 “To be yourself in a world that is constantly making you someone else is the greatest accomplishment.” – Ralph Waldo Emerson

One of the most daunting tasks is learning to not only accept but love yourself despite the negativity that’s inevitably generated against you. Many of us grow up with one insecurity or another and it can take us from years to a lifetime to fully embrace who we are in spite of the criticism, shame and ostracizing we have to endure along the way. To live in a world where you need to constantly explain yourself—from your background to your sexual orientation—to others who refuse to understand you should never be a feat to overcome; it should be a natural right to cherish and celebrate all that you embody.

Before I’m an Orlando native, an Asian-American citizen, a student, sister, or daughter—I’m a human being. When my brothers and sisters fear for their lives, so do I. When my friends and family hurt, I empathize with them. Being Black/gay/straight/White/Asian/etc should never subject me to inhumane treatment or devalue me as a person. At the end of the day, “we are all one race, the human race.” – Willie LeClair Lately, the tragedies and injustices of our nation demonstrate anything but what our founding fathers hoped for. Instead of freedom, these senseless and frequent deaths of innocent people are shamefully something we’ve been rehearsed to witness over the years. Sadly, I’ve never felt more imprisoned on my own soil.

Beyond stricter gun control and more than tighter regulations, what we need is to practice LOVE. The most powerful weapon against and the only deterrent to hate is the ability to love another human being regardless of our differences. Without acknowledging the foundation of the problem, we will never be able to rightly address it. Restricting the sale of certain guns and upgrading background checks and security measures can be the first step, but ultimately there will be another mass shooting and another human being killed for doing nothing but simply being who they are at the wrong place and at the wrong time.

In regards to the Pulse shooting in Orlando, the first thing that came to mind wasn’t terrorism or anti-LGBTQ sentiment. It was disappointment in knowing that one, seriously ill individual grew up never knowing what it meant to love and be loved unconditionally. In turn, this manifested in the heinous slaughtering of forty-nine, innocent lives. If there’s any silver lining, it’s knowing that for every one, sick person there are billions of loving ones who have nothing but positivity to give.

These past few weeks have tested the strength of my city. However, we didn’t stop believing, praying or making an active effort to revive Orlando from this evil act of terror. From candlelight vigils to endless fundraisers, it’s clear that we aren’t backing down. No amount of hate is going to stop us from surviving, overcoming tragedy, and rising above another’s inability to love.

“I think its IMMENSELY important for the community to stand up and fight back because it shows love and unity. We should be a community of one and I haven’t felt such a strong love from my community since this tragedy happened. We stood up and came together through such tough times. It’s amazing! I’m proud to be a part of such a strong community.. We were just doing our part.” – Teresa Ly, co-owner of Sus Hi Eatstation with husband Roberty Ly

“After the initial news, our Chapter felt a sense of shock, disbelief but most of all, pain. As the Phi Chapter of Pi Delta Psi Fraternity Inc. at UCF, everyone knows our brothers are from Orlando, Phi chapter is synonymous with Orlando and our hospitality. We embrace the correlation, it is the place in which all of our valued relationships are formed and we constantly give thanks by giving back and serving our community of Orlando. Hearing that 50 lives were lost here in our very own city, all in one night was difficult to take in.” – Vu Nguyen, brother “ODYSSEY” of Pi Delta Psi at UCF (Executive Board Warden)

“I was shocked…in disbelief really because I woke up with messages asking if I was ok and I was confused. Once I opened up FB I realized what had happened.” – Trung Nguyen, local Orlando photographer

This month, countless restaurants and organizations have taken the initiative to not only mourn, but pay respects to the Pulse victims and their families, with copious support from the Asian-American community. If there’s anything that allows me to restore my faith in humanity, it’s the pure and selfless gestures by these groups and individuals.

“When we heard about the shooting, Robert and I were completely in shock and knew that we had to do something immediately. That entire day, we gave out free food to all EMTs, doctors, nurses, police officers, firefighters, victim families, people who donated blood — basically anyone who was involved with the tragedy. As business owners, we feel greatly indebted to the community and we’re quick to help any way to can…I guess that’s the beauty of being an entrepreneur, you can use your resources for good.” – Teresa Ly

“We, as a fraternity, knew that our most contributing strengths were our connections and influences, not only in within Orlando, but nationally as well and wanted to draw on that strength by raising awareness to the tragedy and donating funds to help the victims and their families through t-shirts…Besides our t-shirt start up, our brothers have also donated blood, food and water to donors and family members at the hospital and attended various vigils to pay their respects. Though we have done volunteering and fundraising for many tragedies and disasters, this incident has left a mark on us unlike any other, and we encourage everyone to take action, be vigilant and to stand united against violence and hate.” – Vu Nguyen

“I’ve taken photos for Luis Velma’s funeral and photos in general of bills and memorials…the city and Orlando Strong…I am currently putting together a fundraiser on Generosity to raise money for the OneOrlando fund.” – Trung Nguyen

Other participating individuals and organizations who have raised funds for or contributed by volunteering or donating to the victims and their respective families of the Pulse nightclub shooting:

Also, special thanks to Asia Trend, Ricky Ly, Krystle Nguyen, and David Yu for all the help in keeping me informed and updated on all the work from those mentioned above. Lastly, thank you to everyone involved in general. In such dire times, every voice, gesture and little bit of effort counts. Let’s make progress and work towards a brighter future.