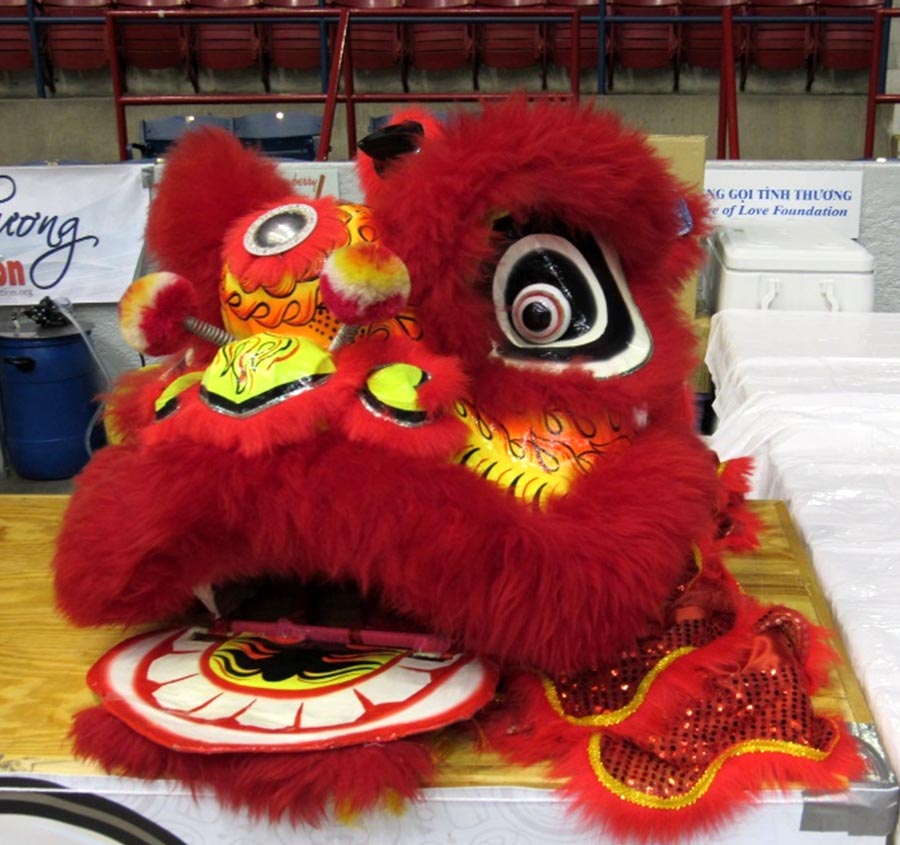 Back in February, Thuyen May Productions celebrated Lunar New Year in a special way—away from home. Traveling approximately 600 miles from Orlando, Florida to Raleigh, North Carolina with seven families in tow, Thuyen May Productions had their first out-of-state performance to ring in the Year of the Dog. For many, it was the first time traveling for such an occasion. Along the way, the families stopped to sightsee new sceneries and attractions such as the South of the Border in South Carolina, at the intersection of Interstate 95 and US Highway 301/501. Driving since early morning, Thuyen May Productions arrived in North Carolina in the evening where preparations for the new year had already begun.

The program was a tết (lunar new year) festival hosted by the Vietnamese-American Association of Raleigh (VAAR), a community dedicated to the proliferation of culture, economy, and education for the Vietnamese community, Raleigh, and North Carolina. Dorton Arena, the program venue towering atop the North Carolina State Fair, is impressive with its 7,610-seat capacity and wide space serving multi-purpose sports and arena concerts. The night before the program, the Vietnamese people of Raleigh gathered in the arena to practice dances, set up food booths, build props and photo-op sets, test sound and lighting, and so much more.

Culture, a central theme to the program, was widespread on the show floor. During the day, there were Vietnamese-authored books, historical exhibitions, and artifact exhibits in between food and merchandise booths. Anyone can stop by for a good conversation with a cultural representative for stories behind each historical Vietnamese coins. On the other side, visitors could view artwork on famous Vietnamese figures, historical and legendary. The entertainment program was also culturally oriented. Adults and children alike sang and danced to classic nhạc xuân (spring music). Not only was there Miss Vietnam Carolinas and martial arts stages, but there were also award presentations for Vietnamese language classes and the VAAR’s inaugural scholarship program.

Thuyen May Productions contributed four performances to the celebration. The dance troupe opened with their grand rendition of “Câu Chuyện Đầu Năm,” a spectacle showcasing traditional new year’s best clothes from all three regions of Vietnam. They also premiered their newest dance, “Thư Pháp.” The water sleeves and flowing dance reflected the concept of calligraphy and evoked the art of ancient sleeve dancing. They performed their annual dynamic routine “Nắng Có Còn Xuân” with fans representing energy, prosperity, snapping firecrackers, and the “openness” of welcoming the new year. Thuyen May’s program ended on a high note. Bedecked in lucky colors of red and gold, they danced a lively “Xuân Và Tuổi Trẻ” flower waltz to welcome the springtime with yellow hoa mai, a flower often found in the southern region.

The celebration lasted all Saturday, from 10:30 am to 11:30 pm, and there was not a moment to lose. The evening highlight was the concert where two popular Vietnamese singers, Thế Sơn (from Asia Entertainment) and Hà Thanh Xuân (from Thúy Nga Productions) gave their all to a fun and lively night. A live band added to the energy and the festive spirit continued long after the program ended near midnight. High spirits followed Thuyen May Productions back home to Florida where the group prepared for a series of performances in their hometown. Performing out-of-state was a new venture for Thuyen May Productions and for the seven families who celebrated the new year away from home. But all was well—it was home away from home!