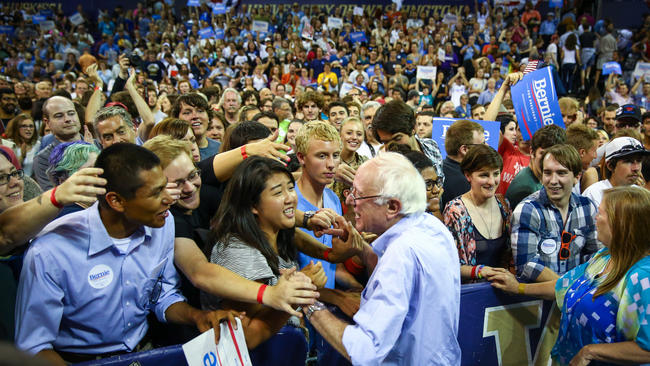 Born in a UN refugee camp, Bao Nguyen and his parents emigrated to the United States to escape oppression in communist Vietnam. Bao was elected Mayor of Garden Grove, California in 2014, making history as the first directly-elected Vietnamese American Democratic Mayor in the United States. 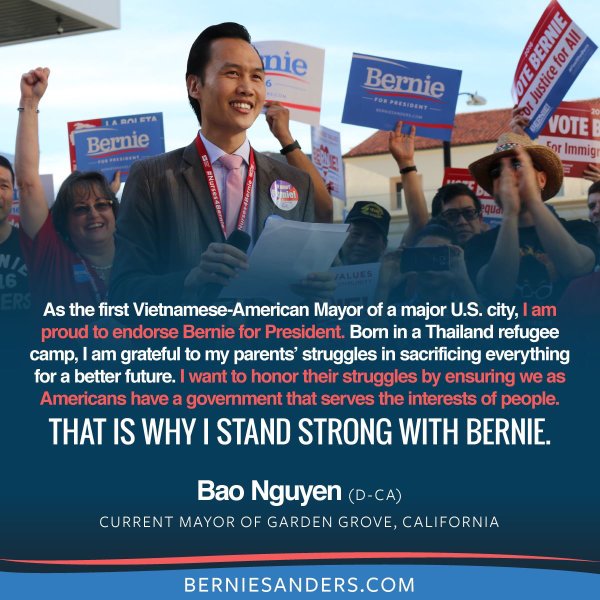 A recent Gallup poll showed that Democratic presidential candidate Bernie Sanders enjoys the highest level of popularity for any major candidate of either party among Asian-Americans.

According to the Pew Research Center, Asian Americans are the highest-income, best-educated and fastest-growing racial group in the U.S, with Asians now surpassing Hispanics as the largest group of new immigrants.

As an Asian-American, economic opportunity, education, immigration, and social justice are all important issues for me. Working hard, opportunities for growth, the pursuit of happiness are all American values we cherish.

With an extremely diverse population, I can not speak for all Asian Americans, just for myself. 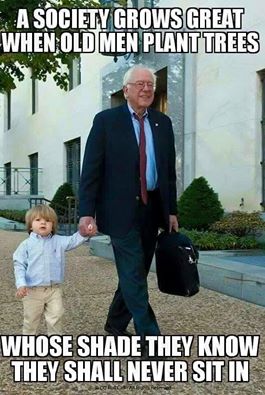 Just a few months ago, I knew little about the Vermont Senator who swept America to its feet with his speeches on economic inequality and social justice. The more I learned about him, the more I grew to support and believe in him as the best candidate to unite our country and move us forward to a “future we can believe in.”

It’s not just about Bernie Sanders, but a movement that seeks to revolutionize our political system to be more of a government that is by the people, for the people.

Many people today in America have no interest what so ever in politics. I don’t blame them – politicians today represent not the people, but their corporate donors – from the fossil fuel industry, Wall Street banks, and other multinational corporations who have no loyalty to the United States of America.

The government’s policies are written and rigged to benefit these corporations rather the people. 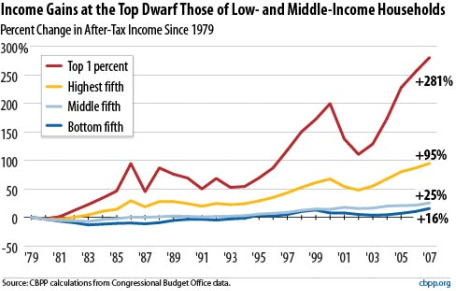 Bernie seeks to change this by having the government represent the people again by taking corporate money out of politics. Today, he is the only candidate running for President without a SuperPAC or large corporate donors, having the majority of his campaign financed by small contributions by over 5 million people.

Born the son of Polish immigrants, whose family survived the Holocaust in Germany during World War II, he grew up mostly poor, eventually attending the University of Chicago in the 1960s.

Even then, on social justice issues, his actions would show that he would be on the right side of history, peacefully protesting against segregation in Chicago and being arrested at a demonstration where he and young black men and women were chained together in protest to discriminatory and racist housing policies. 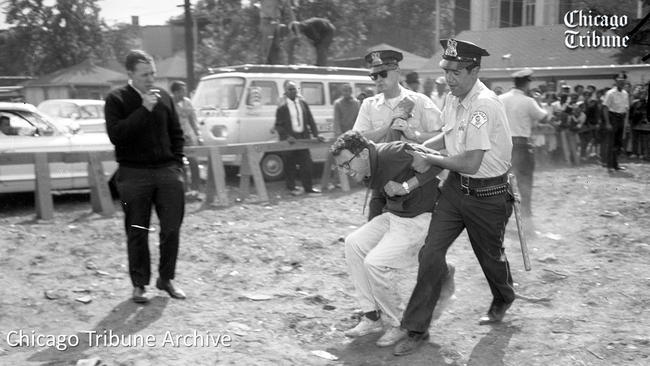 This was a dangerous time when many men and women of all races and backgrounds were beat and killed for protesting for civil rights. It takes courage to stand up against the status quo, to stand up for justice in the face of systemic injustice. He later participated in Martin Luther King Jr’s March on Washington for Jobs and Freedom. 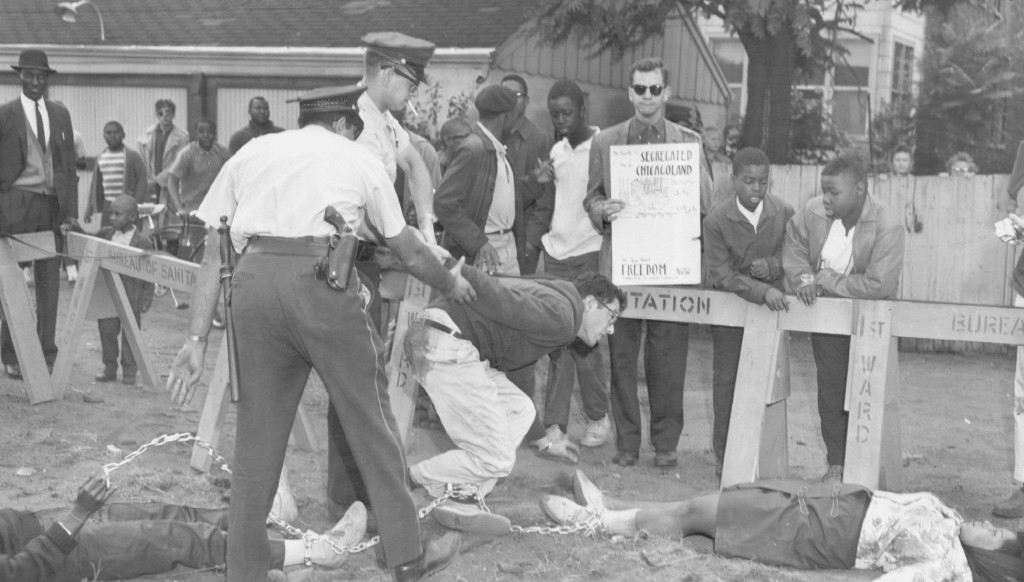 He continues to fight for civil rights and social justice today, proposing to have full accountability of law enforcement who break the law as well as making sure people who are in jail get training and education needed so that they do not return to a life of crime. He seeks to unify us, not divide us by our race, gender, religion, or creeds.

Asian Americans are acutely aware of what happens when people give into their darkest fears and hatreds, how the government and even our own fellow citizens can act out, sometimes in violence, in misplaced anger and frustration against those who look, speak, or act differently.

From the Chinese Exclusion Act of 1885, the Japanese American Internment Camps during World War II, the death of Vincent Chin, to the targeting of Muslims and South Asians after 9/11, Asian Americans have through American history been unjustly and unfairly targeted in hate crimes when prejudices go unchecked. Senator Sanders has stood up to discrimination and supported civil rights and human rights time after time.

In the 1980s, Bernie Sanders was elected, as an independent, mayor of Burlington, Vermont, serving four terms before going on to be elected US Representative and then Senator for Vermont.

During his time as mayor, he worked with both the local community and businesses to come together to better the city, leading to many policies which make Burlington one of the most liveable cities in the United States today. 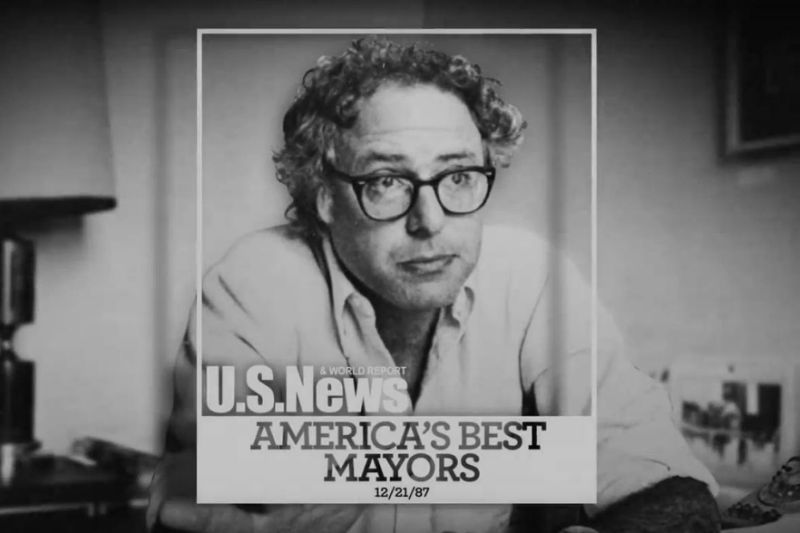 On the economy, today, there are six financial institutions, the largest six, that have assets that are the equivalent of 60 percent of the GDP of the United States of America. How can politicians who say they will fight the banks and corporations when they accept over half a million dollars from them in speaking fees and donations? Will they represent the people who elect them or their corporate donors who pay them?

There is something profoundly wrong when today, the top one-tenth of 1 percent own almost as much wealth as the bottom 90 percent. Former US Secretary of Labor Robert Reich says that 95% of economic gains went to the top 1% net worth since 2009. The system is rigged. 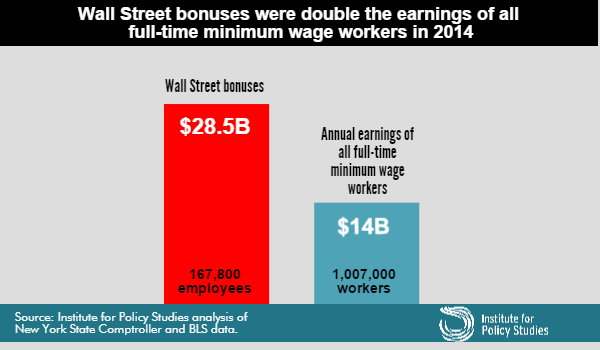 “What my campaign is about is a political revolution – millions of people standing up and saying, enough is enough. Our government belongs to all of us, and not just the handful of billionaires.”

Recently on CNBC’s “Fast Money”, Asher Edelman, a former Wall Street corporate raider, who the character Gordon Gekko from the film “Wall Street” was based upon —stated that Bernie Sanders is the strongest presidential candidate.

“Well, I think it’s quite simple,” he began. “If you look at something called ‘velocity of money’—you guys know what that is, I presume—that means how much gets spent and turns around. When you have the top one percent getting money, they spend five, 10 percent of what they earn. When you have the lower end of the economy getting money, they spend 100, or 110 percent of what they earn. As you’ve had a transfer of wealth to the top, and a transfer of income to the top, you have a shrinking consumer base, basically, and you have a shrinking velocity of money. Bernie is the only person out there who I think is talking at all about both fiscal stimulation and banking rules that will get the banks to begin to generate lending again as opposed to speculation. So from an economic point of view, it’s straightforward.”

Senator Sanders as a democratic socialist believes in capitalism but with humanity, where corporate greed is checked, where the government is by the people, for the people. Many governments in the world operate successfully with a democratic socialist government from Norway to Sweden, where people enjoy universal healthcare, high levels of education, and high satisfaction of life ratings while still having world class and competitive businesses and companies.

On education, Bernie Sanders proposes to reign in on corporate welfare while providing free public college tuition to all. In this age of technology, a high school diploma no longer cuts it for graduates who want to be competitive in the new global economy. As an Asian-American, education is valued as a way to move up the socio-economic ladder and we believe the more highly educated our country is, the greater our country will be.

On jobs, today, hundreds of thousands of American manufacturing jobs have been shipped overseas through disastrous trade policies like NAFTA and will most likely worsen with the upcoming TransPacific Partnership agreement, pitting American workers with those in the third world making 60 cents an hour, accelerating a race to the bottom for all. Bernie Sanders voted against NAFTA and opposes TPP, working for fair trade with policies written by the people rather than by corporations.

On the environment, Senator Sanders believes that we can no longer ignore the ramifications of human activity on climate change, whose evidence is supported by 98% of the scientific community, and the disastrous effect of our energy policy on our environment. Climate change has been cited by many countries around the world as the number one security concern even above ISIS, above terrorism, because many of their agricultural industries depend on the environment to sustain food supplies and security. We have to start developing sustainable, clean energy alternatives before it’s too late for our planet. 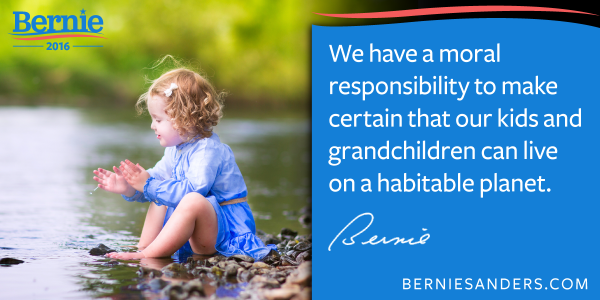 On foreign policy, Senator Sanders believes that war should be the last option after all diplomatic efforts have failed. As a child of the Vietnam War, the needless deaths of millions of innocents is something that should be avoided at all costs. Senator Sanders voted against the Iraq War in 2002, accurately predicting that the war would be a huge cost on our nation both in blood and treasure, as well as the lack of a strategy to fill the power vacuum once Saddam Hussein was ousted from office which would lead to the disastrous insurgent rise of a terrorist group like ISIS. On veterans issues, Senator Sanders worked to co-sponsor the most comprehensive bill to improve veteran care and access in recent history. He believes that just as weapons are a cost of war, so is taking care of the people we sent to fight. Veterans must receive the health care and benefits they have earned, and the respect that they deserve.

“If you can’t afford to take care of your veterans, then don’t go to war.” 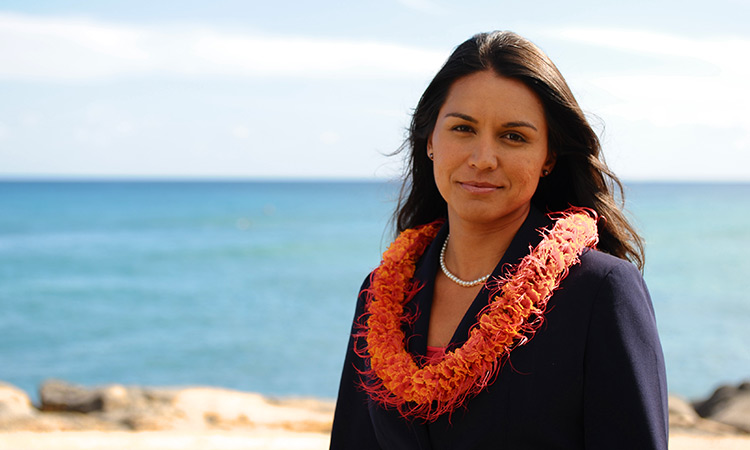 US Representative Tulsi Gabbard of Hawaii, a combat veteran as well as the first American Samoan and first Hindu American member of the US Congress, cited these reasons for her support for Senator Sanders for President. She resigned from her position as vice-chair of the Democratic National Committee

“The choice before us is this,” Gabbard said recently at a rally in Kissimmee, Florida. “We can vote for Hillary Clinton and … get more of these interventionist, regime-change wars that have cost us so much, or we can vote for and support Bernie Sanders, end these counterproductive, costly interventionist wars and invest here at home, because we cannot afford to do both.”

“No one understands more how important peace is than those who’ve actually been there and experienced that high cost of war firsthand,” Gabbard said. “During my first deployment to Iraq, I served in a medical unit where every single day that high human cost stared me back in the face.”

Rapper and Bernie supporter Killer Mike said that “Bernie Sanders is the only politician who has consistently, for 50 years, taken that social justice platform into politics. And right now, we have an opportunity to elect someone who is directly out of the philosophy of [Martin Luther] King-ian non-violence. We can directly elect someone who cares about poor people; cares about women, gay, black rights; cares about lives that don’t look like his. This opportunity in history is not going to come in another 20 years.”

He’s just one human being. He won’t be able to achieve all of this on his own, but together, when we all stand together, America will always win.

That is why I support Senator Bernie Sanders for President of the United States.