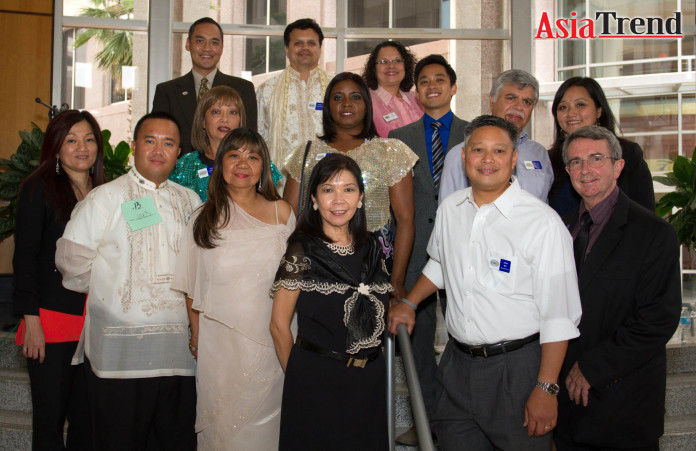 As in previous years, The Orlando City Hall was the venue for the Asian American Chamber of Commerce’s commemoration of the month of May as Asian Pacific American Heritage Month. The event also served as the AACC’s annual Meet & Greet with elected officials from the city, county and state as well as candidates for public office. The celebration was attended by about 250 members, VIPs, and guests from various sectors of the community. There was also the usual vendor participation with table top exhibits, food and beverage and some entertainment.

As a special thank you to the food sponsors for the past five years, plaques of appreciation were handed out signifying the number of years they had been sponsoring the event. The 5-year sponsors were Bento Café and Sam’s Club. The 3-year sponsors  were Hawker’s Asian Street Fare and Pepsico Asian Network. The 2-year sponsors were  Kobe Japanese Steak House and Panda Express and the first year sponsors were Tabla Bar and Grill and Sizzling Grill.

For the intermission, there was some  entertainment featuring Polynesian hula dances performed by Grace Cabusi accompanied by Fili Aulava on ukelele.  This was followed by one of the more popular segments,  the Parade of NAsians cultural attire contest wherein participants parade dressed in various Asian attires.  Top prizes for best in cultural attire went to Jasmine Nguyen  (Vietnam) and Robert Lee (China). There were also other raffle prizes drawn to end the evening.

The annual celebration at the Orlando City Hall is one of the well-attended mid-year events of the AACC. For more information on this and future events, please visit www.asianamericanchambercfl.org.