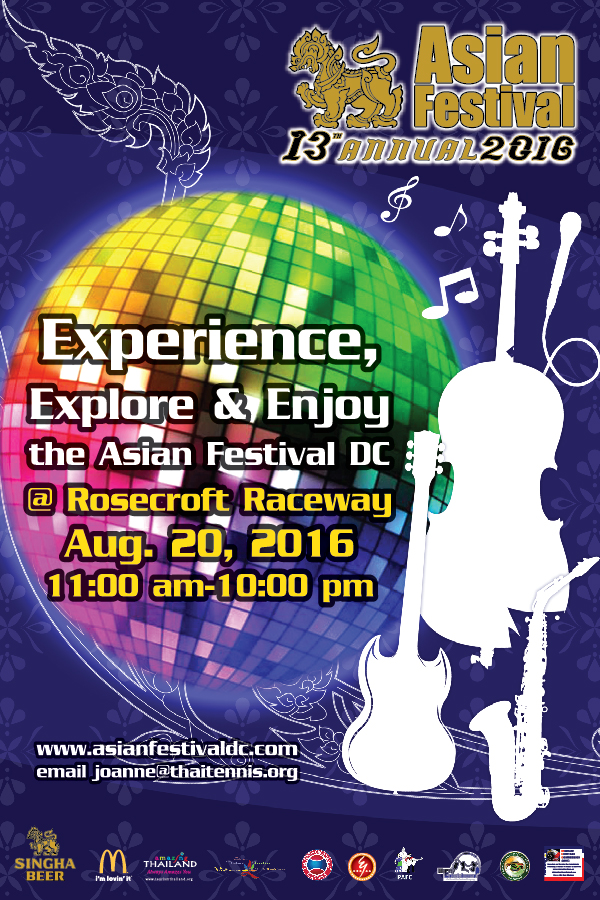 Asian Festival extravaganza aims to promote diverse cultures and celebrate traditions and talents from the Asian continent. The Festival aims to bring together people from various cultural backgrounds, to promote peace, harmony and unity.

Asian Festival extravaganza aims to promote diverse cultures and celebrate traditions and talents from the Asian continent. The Festival aims to bring together people from various cultural backgrounds, to promote peace, harmony and unity. Each participating country will showcase its unique music, dance, food, fashion, handicrafts and other products under the single largest structure in Northern Virginia.

The festival featured over 100 multi cultural retail vendors, traditional Asian food, and all day stage performances. Singha Beer provided the largest Singha Beer Garden in the United States for spectator enjoyment. The famous Thai kickboxing team from Las Vegas, NV and local camp showcased their talents, and many cultural and art exhibits were on display.

This year, we are expecting more attendees via expanding and reaching a wider audience with an Asian Festival. It will be the largest Asian Festival in our area which will promote Asian cultures from Japan, China, Vietnam, India, Korean, Philippine and Thailand
Thai Tennis Organization in America (TTOA) is an event leading organizer, and working with many local Asian Associations to introduce Asian Cultures and tennis in Washington D.C.

TTOA’s mission is to promote tennis growth and encourage young people to broaden their horizons through education initiatives via scholarships. TTOA is a proud member of the USTA family, this national non-profit 501 (C) (3) is based in Northern Virginia with chapters in Los Angeles, Miami and New York. TTOA is well-known as the official fan club of tennis sensation Paradorn Srichaphan, as well as major force in growing tennis among Thais and other Asian Americans.
A major portion of the proceeds from Asian Festival benefits the Thai Tennis Organization (TTOA). Since our establishment in May 2003, TTOA has maintained an institution that fosters and improves relationships among the minority community