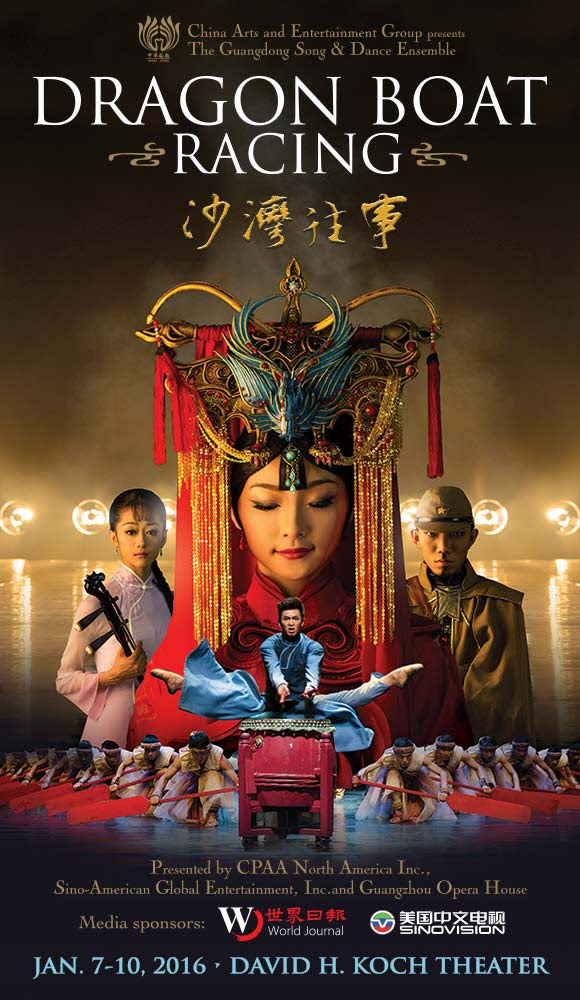 China Arts and Entertainment Group presents the Guangdong Song & Dance Ensemble in the U.S. premiere of its award-winning new dance spectacular, Dragon Boat Racing. Athletic and thrilling, epic and touching, Dragon Boat Racing brings for the first time some of China’s finest dancers to the David H. Koch Theater on January 7-10, 2016. With stunning costumes and stage design that will take your breath away, this epic tapestry of music and movement is sure to be the first must-see event of 2016. Set in 1930s China against the backdrop of the Japanese occupation, Dragon Boat Racing follows two lovers whose passion for each other is equaled only by their passion for music, and tells a story of how one of the finest and most famous Cantonese compositions comes to be…and how it becomes a musical theme that inspires the entire nation.

Guangdong Song & Dance Ensemble, the successor of the former South China Art Troupe established in July 1949, is a state-owned unit directly under the Department of Culture of Guangdong Province. With a history of over six decades, the ensemble has won many national and international honors including Wenhua Grand Award by Ministry of Culture, Lotus Award of National Dance Competition, Special Prize of Delphi Art Contest, and has toured in many countries and regions across the five continents and thus promoted the cultural exchange between China and other countries around the world.