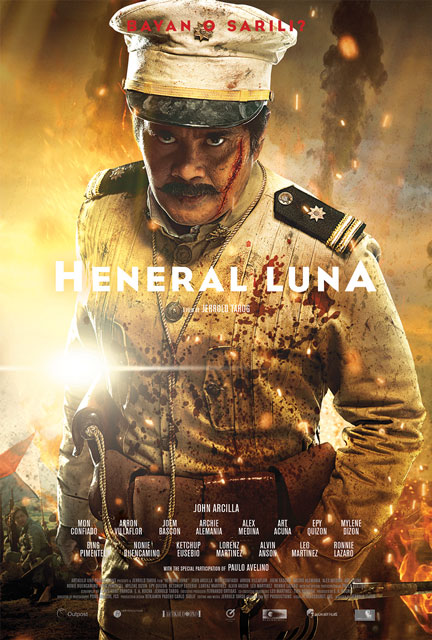 Don’t miss this opportunity to watch the Filipino epic film “Heneral Luna” at AMC West Shore 14  from November 7-11, 2015. This film by Jerrold Tarog took P80 million to produce and has been a box office hit earning P235 million just on its first day.

In 1898, General Antonio Luna ( John Arcilla ), commander of the revolutionary army, is spoiling for a fight. The Philippines, after three hundred years as a Spanish colony, has unwillingly come under American rule. General Luna wants to fight for freedom but members of the elite would rather strike a deal with the United States. The infighting is fierce in the new cabinet but General Luna and his loyal men forge ahead even as his military decisions are met with resistance from soldiers who are loyal only to President Aguinaldo ( Mon Confiado ). Ultimately, it is the general’s legendary temper and pride that bring him to his death when a pack of presidential guards assassinate him in broad daylight. While American newspapers are quick to point the blame to Aguinaldo, the mystery has never been completely solved and the General’s killers were never put to justice.

For more information about the movie, please go tohttp://henerallunathemovie.com/