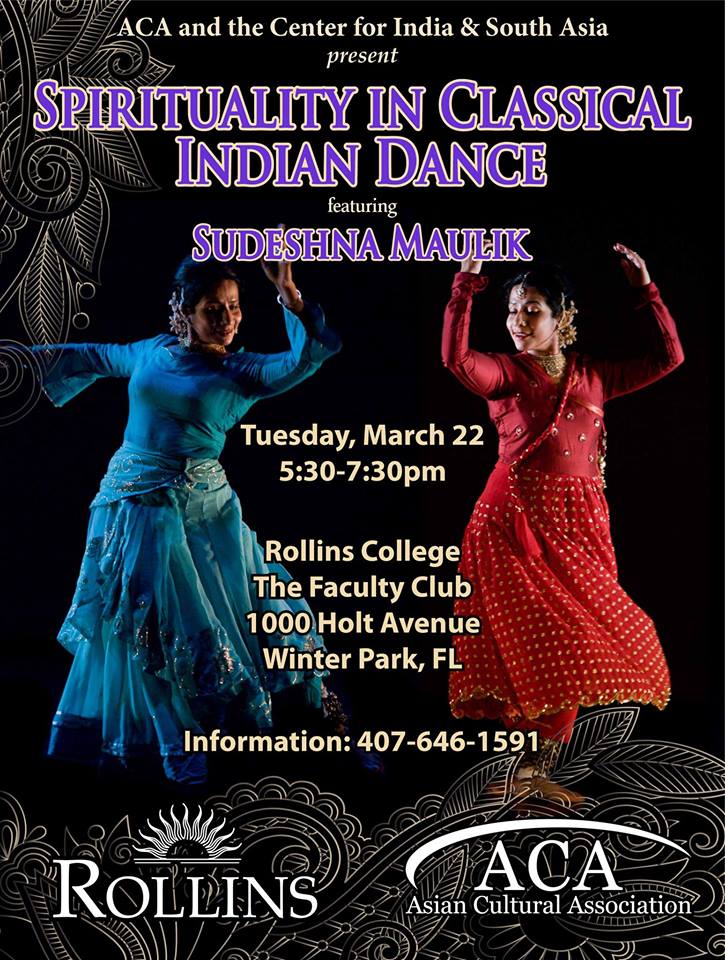 The Asian Cultural Association of Central Florida and the Center for India and South Asian Studies at Rollins College present an exclusive free workshop with Sudeshna Maulik, the internationally recognized Indian Classical dancer.

Sudeshna Maulik has been studying Indian dance since the age of seven.She began her training in Calcutta, India, under teacher and guru Pt. Chitresh Das, and went on to study with Shri Ram Bharatiya Kala Kendra in New Delhi and at the National Kathak Institute under the mentorship of Padmabhibhushan Birju MaharajShe has been a part of numerous productions for more than one decade in India and abroad, which has been sponsored by the I.C.C.R., I.T.D.C, and numerous Dance Companies Internationally. She is a graded artiste in Delhi Doordarshan (National Television) and has performed in C.P.C. (Central Production Center) in different ballets choreographed by Guru Pundit Birju Maharaj Ji, Kumudini Lakhia, and Aditi Mangal Das amongst many other revered teachers of the art.A renowned performer in India, Maulik has danced in Russia, China, Taiwan, the United States, and all over Europe, and given workshops and lecture-demonstrations all over the world.

Witness a dance performance and hear about the connections between Kathak dance and Spirituality at this one-night-only free workshop.