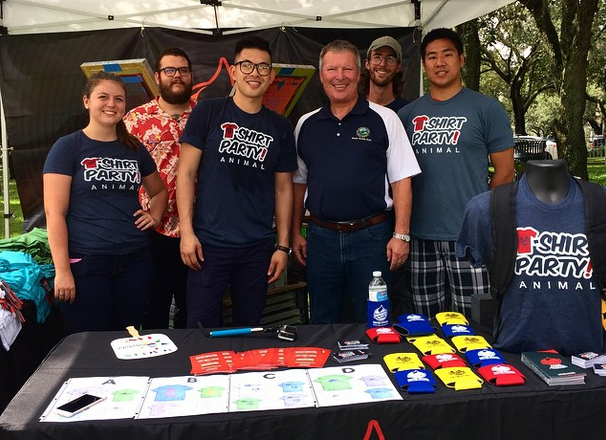 Impress Ink (www.impressink.com) started as the brainchild of Michael Cho and Xi Guo beginning in their garage back in 2008 while college students at UCF.

Fast forward 6 years later and today, Impress Ink is currently a established local printer with clients such as PepsiCo, Publix, Winn Dixie, UCF, Orange County, City of Orlando and many others focusing on fulfilling screen printing, embroidery and promotional products right in the heart of Orlando.

Though screen printing is one of the most ancient print forms still in great use today, it is an art in itself and a wonderful process to watch.

With the cultural influence of cities like Seattle, New York and LA that have taken screen printing into a Live and a Mobile concept for art shows, concerts and a diverse number of events, co-founder Mike Cho created a similar concept to bring to Orlando’s emerging dynamic arts culture, a concept that can showcase the art of textile screen printing in person, a first of it’s kind in Orlando.

We all know that t-shirts are the main form of expression in American culture and most large scale events usually provide it’s own “official” tee. Impress ink hopes to go beyond that by providing a show for event attendees to see the process and their own shirt being printed before their eyes. Impress Ink collaborated with Artlando on September 27, 2014 to launch it’s first official event where they printed 4 designs created by local artists. Impress Ink doesn’t just hope to be a local print shop, but a new establishment that can add to Orlando’s artistic flavorful tapestry.

Asia Trend asks these two young men about their inspiration and drive as Asian American entrepreneurs.

Asia Trend Magazine – What inspired you both to start Impress Ink?

Mike Cho, Co-Founder, ImpressInk.com – Firstly, it was a solution to benefit ourselves. We
believed that if we bought simple equipment to create our own T-shirts, we would be saving the hassle of ordering shirts and over spending money that we pretty much did not have. We were in college at that time and were broke. While many people would see this as a disadvantage, we saw it as an advantage because what did we have to lose? Nothing – but all the world to gain.

After making the investment we pretty much had to force ourselves how to create a process and use the equipment. It definitely was not easy at all, we would sometimes stay up to two and three in the morning to finish just the simplest jobs. But in turn, our services spread across the University of Central Florida’s student involvement community and now has become a full business that fulfills ideas that benefit both businesses and organizations.

Asia Trend – What are some tips you can give to young Asian Americans who are looking for inspiration for career and want to do something different from medical, law, and engineering, the so called “stereotypical” careers? Mike Cho – I believe that Asian Americans shouldn’t be singled out to only fulfill some specific jobs. We are all able to spread our talents across the board and commit to things that are out of the norm. I do understand that there’s a generation gap between my generation and our immigrant parents, but in the end I believe if we all show commitment and passion for something in due time you will receive respect. When I started this my parents were actually discouraging me because I was still a student and they did not want it to affect my academics. Today, they are extremely proud of our success and encourage us to continue our path and dreams. Three keywords that I would tell anyone would be: commit, focus and persist.