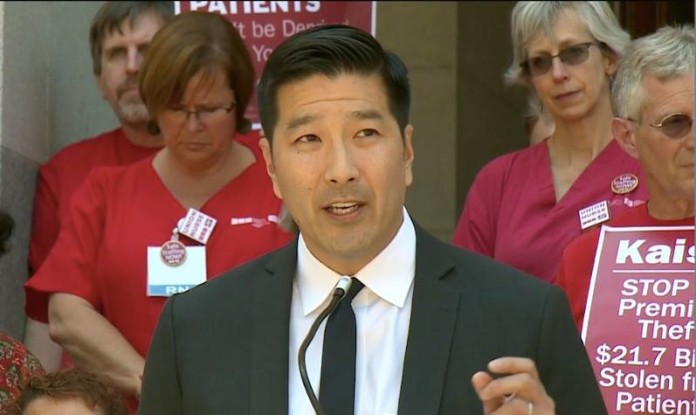 Korean American Dr. Paul Song is a radiation oncologist, biotech executive, and Head of the Courage Campaign (a progressive online CA based organization with over 1.3 million active members who fight for a more progressive CA and country). Also a healthcare activist, he gave a rousing speech in support of Senator Sanders in February at a large rally during the 2016 California Democratic Party Convention. Dr. Song supports Sanders as the “only candidate who believes healthcare is a fundamental human right and that our current healthcare status quo is broken and immoral. Senator Sanders rightfully recognizes that a single payer Medicare-for-all system remains the only true way to guarantee universal comprehensive coverage of all people living in America.”

Here are his words:

I am the eldest son of Korean Immigrants. My father was born in Pyongyang and served in the Korean Navy during the Korean War, while my Mom came to the US as a refugee to study. My maternal grandfather, Kim Sang Don, was the very first popularly elected mayor of Seoul. Prior to being elected Mayor, he served as a congressman and led the commission to bring the Koreans who illegally profited by extorting fellow Koreans during the Japanese occupation (Chin-Il-Pah) to justice. He survived an assassination attempt by President Syngman Rhee who was protecting the Chin-Il-Pah and would lead the sit in which would eventually lead to his overthrow. Shortly after my Grandfather became Mayor of Seoul, there was a military coup d’tat and my grandfather would eventually be exiled to the US. He was a very honest man of great faith and integrity who never had a dime to his name.

He believed that we as a society were defined by how we cared for the least among us and practiced Matthew 25:35-36 “For I was hungry and you gave me something to eat, I was thirsty and you gave me something to drink, I was a stranger and you invited me in, I needed clothes and you clothed me, I was sick and you looked after me, I was in prison and you came to visit me.’

He would fight for full democracy until his death and my family was not allowed to return to Korea until democracy was fully restored in 1992. My mom would eventually graduate from Columbia Teacher’s college with a masters degree in early childhood education. When she graduated, her first mentor and employer was Shirley Chisholm. Ms. Chisholm was the first African American woman elected to congress and the first woman to ever run for President. Prior to running for office, she directed several inner city preschools in NYC, and my Mom would work under her tutelage for 6 years. In fact, it was Ms. Chisholm who got my Mom her green card. Eventually, Ms. Chisholm would run for congress and Dr. Song’s mother would end up leading the Head Start program in Newark, NJ for 20+ years. In 1972, she became the first major-party black candidate for President of the United States, and the first woman ever to run for the Democratic Party’s presidential nomination.

When Ms. Chisholm ran for president, she would send out an envelop asking individuals for donations that read “Up until now there were only two ways finance a campaign for major office. One was to be a millionaire. The other was to get the support of a group that had a lot of money and was looking to make more. I am certainly not a millionaire, and I will not be bought by any group”. She would say she was “Unbought and Unbossed”.

Ms. Chisholm advocated powerfully for those without a voice and constantly fought to better the lives of those that were marginalized.

Everything I remember about my Grandfather and know about Ms Chisholm leads me to support Bernie Sanders.

Of all Asian American Pacific Islander groups in the US, Koreans remain the most uninsured.

It is a little known fact that Korea has a single payer healthcare system that is considered one of the most advanced in the world, with tremendous patient satisfaction. Senator Sanders is working to transform our broken healthcare system into a similar single payer medicare for all system where everyone will have access to comprehensive healthcare and no one will ever go bankrupt again simply because they have a serious illness.

Korean parents value education and many work countless jobs and sacrifice greatly to send their children to college to have a better life than they had. Senator Sanders will fight to make a college education affordable for anyone who pursues a higher education while reducing the need to work two jobs simply to survive.

I believe these are several profound ways that Senator Sanders will help not only the Korean community, but all communities.