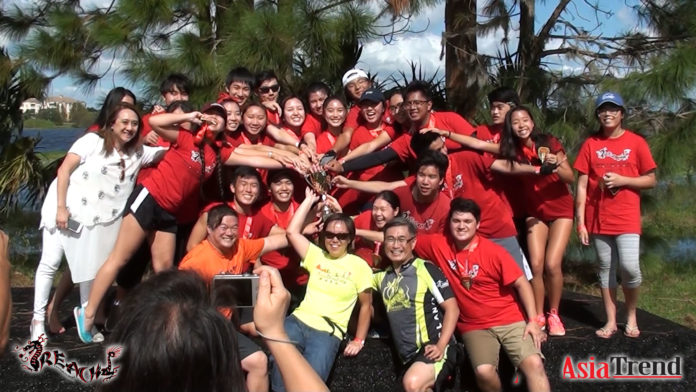 On October 14th, 2017, the REACH Dragonboat Team competed in the 10th Annual Walgreens Orlando International Dragon Boat Festival at Turkey Lake. This year, over 50 teams came out to the event to compete for a trophy and medals for their team. The sport of dragon boat is a team sport, usually consisting of 16-20 members at a time, on a long boat with two paddlers in each row. These paddlers work together to move the boat across a distance as quickly as possible, and REACH has decided to compete in this event once again.

The REACH paddlers this year consisted of high school students from 9th through 12th grade who were very excited about this new or old experience. The captains for this year was Christopher Tran, Sarah Joe, Anthony Chung, and Duc-Thanh Nguyen. Although REACH had an excellent team of Captains, the team faced obstacles like no other previous team ever did, however they were able to overcome everything that came their way.

The biggest problem the team faced was the incoming prospect of Hurricane Irma, along with its after effects. Although the storm did not hit Orlando as hard as other areas, the water in the lake where they practiced was no longer deemed safe. The team was devastated, as these practices are considered crucial in developing team morale, skill, and experience for the new paddlers. Missing practices were a definite hit in the progress the team was making. These issues, however, were overcome through careful practice planning and putting in extra effort at the practices that the team had left, and before the day of the race, the team was ready.

On this humid, cold morning, the team arrived knowing that they were to compete in the first race of the entire event. The team arrived to the Marshalling area for the race around 7:40 am, ready to race their hardest. The first race sets the tone for the other two, so they knew how important it was. They paddled out onto the water, and when the race horn blew, the team raced their hardest! They had gotten 2nd place, which was impressive for being the youngest team at the entire event.

The following race did not go as well. The team had been assigned to the “B” Division which was the highest REACH had ever been ranked! They knew they had some tough competition in their area, but they felt ready to take them on. However, the 2nd race the team placed 4th, so the team was assigned to the Consolation B Division. This ended up working in their favor though, as the loss had fueled these paddlers to race even harder than they could ever imagine. When the final race came around, and the air horn blew, the REACH Dragonboat Team flew down the course, taking first place by almost a whole boat!

Following this exhilarating win, the team strutted onto stage to get their medals to award them for their hard work. The day was a success, and the obstacles from their preparation had been overcome. The team beamed with pride and joy; and the team took many pictures with the dazzling trophy. Next year, REACH will return, ready to defend their title once again.

As I thrust my paddle into the water and pull it through the waves, nineteen other paddlers and I propel the boat forward to the finish line in our final race.  Although the water drenches me and my shoulders ache, I challenge myself to paddle hard for the last one hundred meters.  The energy that pulsed through the boat at the beginning of the race is waning, yet the paddlers continue to push themselves physically and mentally.  Once we cross the finish line, we cheer as we realize that we have won the gold medal.

My participation in dragonboat has taught me the importance of diversity and teamwork.  Ever since I started paddling in ninth grade, I was hooked on this sport that connected me with my Asian heritage and brought me out of my comfort zone.  Dragonboat depends heavily on the team’s synchronization, hard work, endurance, and determination.  However, each paddler makes a big difference in moving the boat forward, regardless of their location in the boat.  One paddler who loses focus or goes out of sync ultimately slowsdown the whole boat.  Despite varying levels of strength and athleticism, I learned to appreciate the different gifts and the impact of each paddler as I paddled each year.

Although I had participated as a paddler through ninth and tenth grade, dragonboat broadened my perspective even more as I became a co-captain my junior and senior year.  As a co-captain, I helped set a vision for our team’s success and handled the administrative details, fostering my leadership skills and growth as a communicator.  Through being a co-captain, I learned more about dragonboat and the many different components that are necessary to be a successful team.

This year was our most competitive year yet, with over thirty paddlers interested at the time of tryouts.  Even with the many new paddlers that joined and the challenges that Hurricane Irma presented, our team continued to practice hard and stay focused as we prepared for our race.  Although our times in practice were often slow, we pulled together to beat the team record on race day!  I am truly grateful to the many individuals who helped make our team this year possible and the opportunity to compete, including the captains, paddlers, CHARGE members, and our coach, C.K. Lau.  I am also thankful for Pauline Ho and Agnes Chau for their support and for empowering our team to become what it is today.  We have come so far from our first race in 2011, and I’m so proud of our team for their dedication and their willingness to learn this past season.  I will miss dragonboating with REACH’s team, but I’m excited to see the team’s growth and progress next year!