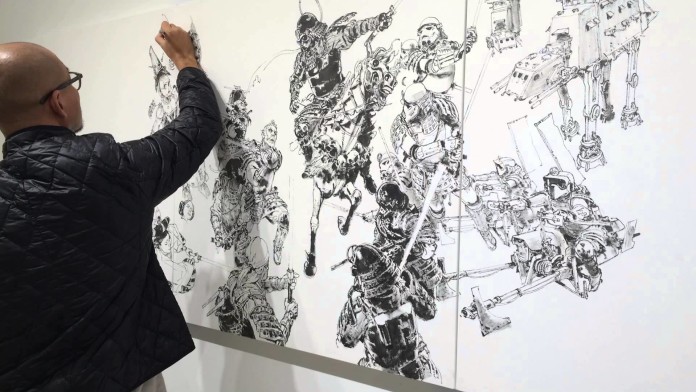 Korean Artist Kim Jung Gi used 6 hours to finish a Japanese mashup of Starwars art.  The original is 3′ tall by 9′ wide.  Prints available at ArtWhino.com of this amazing piece.

Kim Jung Gi (40) is from Goyang-Si in the province of Kyongki-Do, South Korea. With a passion for art and drawing from an early age, Gi entered Dong-Eui University in Busan when he was 19, and majored in Art & Design, with an emphasis on technical ability. Gi then served his civic duty in the Korean army Special Forces for more than two years. During his service, he memorized an amazing number of vehicles, weapons and other military objects to include in his work.

Funny Funny, KJG’s first publication, appeared in the ‘manwha’ (comic book) Young Jump. Then came several short stories and a series of different exhibitions, prior to adding teaching manwha at universities and private schools to his repertoire.

In 2007, KJG gathered nearly 3,000 pages of his sketches and published them in three different Sketchbooks. He also published Spy Games in 2014, in collaboration with French writer Jean-David Morvan (Glénat Editions). In June 2015, a new museum in Penang, Malay, had an exhibition of his work, including his attempt at the Guinness Book of World Records for the “Longest drawing by an individual in Fisheye Art” hand drawn illustration.

When Gi is not working in advertising or managing AniChanga, his drawing school in Seoul, he’s traveling the world to meet his fans, often appearing at Comic-Con events and pop-up demonstrations of his work, seeking more inspiration and ideas along the way. For more information, visit www.kimjunggius.com