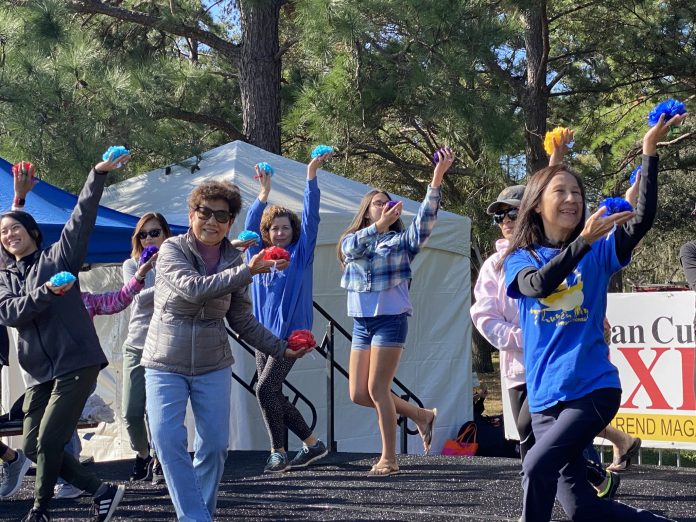 Every year there is the Asian Cultural EXPO event sponsored by Great White North GWN Dragon Boat from Canada (who organizing the Orlando Dragon Boat International Festival) at Bill Frederick Park in the middle of October. This year, due to Hurricane Ian hitting Central Florida at the end of September which caused a lot of damage and flooding; a lot of water activities in the parks had been cancelled or postponed! Consequently, the Asian Cultural EXPO event was delayed till November 19th! Furthermore, what added onto our worries was a rare November storm Nicole made landfall on November 10th – 9 days before the event!  Fortunately, the event was able to be held as re-scheduled!

Saturday, November 19th was a beautiful day weather wise – not too hot and not too cold and best of all, no rain! All the racing teams arrived really early in the morning to get ready for the races started as early as 8 am! Well, that was the water activities; on land, we have both Western and Asian food venders and entertaining programs for people who came for the event to enjoy.

Apart from watching the Dragon Boat race, we had arranged a full variety of programs to entertain the audience.  By 10 am, stage program kicked off with Thuyen May Productions group’s work shop showing a stage full of enthusiastic audience, how to do a Vietnamese style dance based on a popular Taiwanese song called ‘The Moon Represents My Heart’.  Followed by The Orlando HanQing Taiji Culture & Art Center group demonstrating different formations of Taiji in Freehand, with Sword, with short and long handle Knifes, and with Fans. One of the Taiji group members did a Peacock dance and another member did a Chinese Folk dance. Apart from the popular Orlando Taiko Dojo who appears in a lot of events performing powerful Japanese drumming after a work shop led by the dojo’s Sensi Take San.

This time we also invited members from Orlando Korean Cultural Center to perform a Scarf dance and to demonstrate Korean style drumming! Ever since the K-Pop band BTS’s first performance in the States and shook the American music industry; that brought the growth of various K-Pop groups in Florida. One of them is StarFire who has won serval competitions and performed in various events and we have the pleasure of this group participating in this year’s ACEXPO event!

We have not seen Indonesian dance for a few years, this time Putri Mandalika Indonesia Dance Club Florida joined us to perform two beautiful dances in their glamorous costumes as usual!  We also had a Vietnamese musician introducing the Dan Bau – monocorde of Vietnam. Mr Nhut and his musical partner perform a few Vietnamese folk songs both in Western pop and Vietnamese style!  In short, all these programs were a feast for both ears and eyes for everyone!

Although the number of the dragon boat teams took part in the race this year was not as many as in previous years due to the postponement, we had a pretty successful day all round!