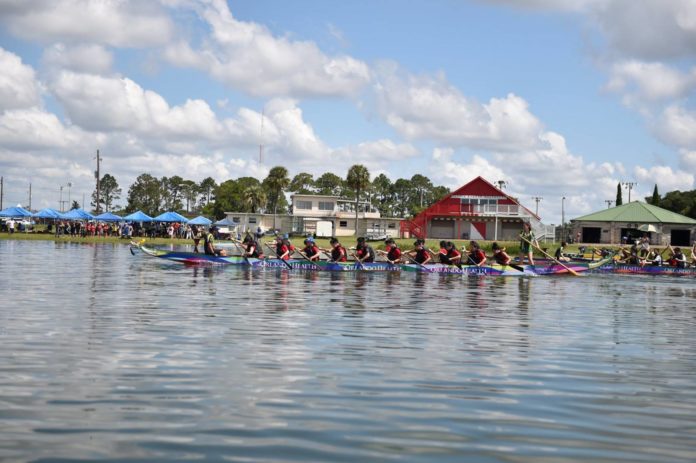 The Chinese American Association of Central Florida (CAACF) has fulfilled its mission over the years by hosting Duanwu Dragon Boat festival during the 5th day of the 5th month of the traditional Chinese calendar, featuring workshop attendants a taste of both dragon boat racing and delicious bamboo leaf wrapped sticky rice dumplings called zongzi 粽子. Attendees also learned about the history of behind Duanwu Festival through storytelling and trivia competition.

The Duanwu Festival, also often known as the Dragon Boat Festival, is a traditional holiday originating in China, occurring near the summer solstice. The festival now occurs on the 5th day of the 5th month of the traditional Chinese calendar, which is the source of the festival’s alternative name, the Double Fifth Festival.

Event have close to 80 participants in four teams. Three teams from Central Florida and one team form Tampa.  The final 1st place is team F.O.B. from Tampa.

“ The festival was the perfect combination of a cultural celebration and a rendezvous between friends. We were not only able to test our Duan Wu knowledge and carry out the tradition by dragon boating and eating zongzi, but we also had fun playing games and socializing with the people in our community. The Duan Wu Festival was the perfect introduction to summer. ” ~ Nicky Zou – REACH of Central Florida

“ The CAACF Duanwu Festival, June 4, 2016, host by the Orlando CHARGE Dragon Boat team was designed as an opportunity for beginner teams to receive teamwork training as well as fuel the competitive spirit with a mini-race. Florida Orange Blossom (F.O.B., Laos Community Team), lead by captain Be Vorasarn and coached by Kitt Noythanongsay, attended the event to get their first taste of what a dragon boat race would be like. The team definitely made the event a family affair, with husbands, wives, and children all attending as support. Call it beginner’s luck, or their desire to win, with just a few practices on the water the Laos Community Team managed to get first place at the event. To win first place at their first race was a huge encouragement to the Laos Community Team to continue their enthusiasm and interest in dragon boating. The race experience also allowed them to truly understand the importance of timing and technique. We can’t wait to see how F.O.B. performs in their next race in Atlanta! ” ~ Jessie Collier – Suncoast Asian Cultural Association