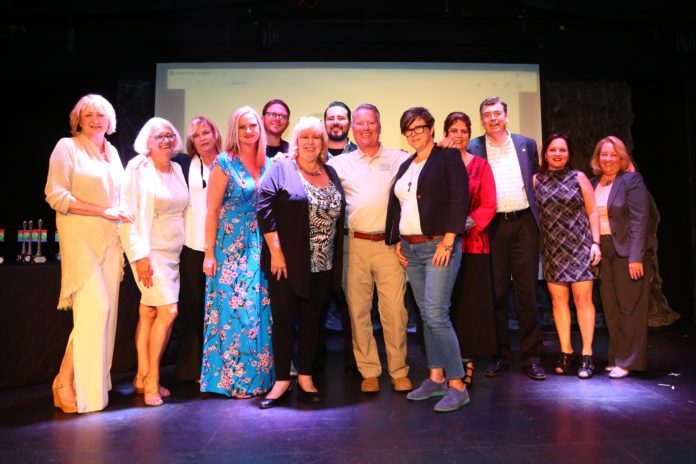 On July 29, 2017, Orlando Mayor Buddy Dyer and Orlando City Commissioners joined with the City’s Orlando Main Street Districts to honor and recognize the individuals and businesses who fill these unique neighborhood commercial areas with local character and make them desired destinations to live, work and play in.

“I am so proud to celebrate these districts, businesses and individuals that passionately serve our community and help us to create a true sense of local pride, strong neighborhoods and a healthy economy,” said Orlando Mayor Buddy Dyer.

During the 6th Annual Orlando Main Streets Award Ceremony, 37 district and individual awards were presented to recognize the volunteers, businesses, merchants and initiatives that have contributed to Orlando’s 10 Main Street Districts.

Since their inception in 2008, the Orlando Main Streets have become home to a variety of locally-owned businesses which help to drive the Central Florida economy by providing jobs, services and opportunities for local residents. In the past nine years, the Main Streets have welcomed nearly 1,000 new businesses and nearly 5,600 new full and part time jobs.

The District Award nominees were evaluated by an independent panel of judges, with four districts receiving awards for best exemplifying one of the Main Street Four Point Approaches for Promotion, Organization, Design and Economic Vitality. There was also one award appointed for outstanding achievement in each of the categories.

By creating a multi-activity, interactive scavenger hunt requiring participants to visit a number of bars, retail locations, restaurants and other local businesses to complete a variety of tasks, Mills 50 District provided local residents with a unique experience and introduced them to businesses they were not familiar with. This event raised almost $2,000 to put toward district improvements and activities and drove business sales throughout the district.

The Retro Modern Home Tour celebrates Orlando’s mid-century modern aesthetic while highlighting the importance of sustainable practices and historic preservation throughout the district. This event proved to be APGD’s most successful fundraiser to-date, raising more than $11,000.

APGD partnered with a local architect, Green Up Orlando, Birds of a Feather, Winter Park High School and APGD local businesses to transform Song Bird Park from a park that offered little in the way of habitat for songbirds into an urban bird sanctuary filled with hand-made bird houses, each designed to reflect an APGD business. The team also replaced non-native, low-value plants with native Florida and high-value plants.

For the second year in a row, the judging panel was so impressed with each submission for the District Awards, they handed out an additional Judges Choice award.  The award went to the SoDo District for the extraordinary planning and execution of the annual Light Up SoDo event. The event was the most successful Light Up SoDo event to date, hosting nearly 12,000 guests and a number of businesses having one of the most successful sales day in their history.

The Main Street Awards Ceremony also provides an opportunity to highlight the people, places and initiatives that make our Main Streets uniquely successful. Each Main Street also nominated a Volunteer of the Year, Business or Merchant of the Year and Best Private Improvement of the Year.

Volunteer of the Year

The Volunteer of the Year award was presented to volunteers from each district who dedicated their time and effort toward helping their Main Street thrive. These winners include:

The Business/Merchant of the Year award recognizes either a business overall, or an individual merchant/employee who has demonstrated an outstanding commitment to and involvement with their district. This includes setting high standards for their business, exhibiting a positive image, and producing an overall positive impact on the district. These winners include:

Best Private Improvement of the Year

The award for Best Private District Improvement was presented to the individuals or businesses that completed the best private improvement project within each district. The winners include:

Established in 2008, Orlando Main Street is an economic development program that provides technical assistance, training and staff support to urban commercial districts in the City of Orlando. The program empowers neighborhood business districts within the City to maintain, strengthen and revitalize their unique physical, historical and cultural characteristics. When a district participates in the revitalization effort, the entire community experiences renewed vitality and enhanced economic performance.