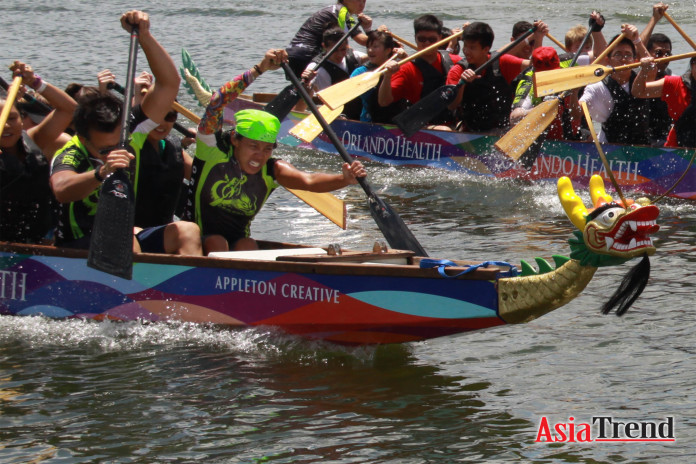 Every summer, Chinese people celebrate the Duanwu Festival 端午節 (Duānwǔ Jié), honoring traditions and legends that are now over 2000 years old. It’s an official public holiday scheduled on the fifth day of the fifth month in the lunar calendar, and you might hear it called the “Double Fifth Festival.” As its timing is based on the lunar calendar, the date for the festival on the Gregorian calendar that Americans use isn’t always the same. This year, the double fifth fell on June 20. Here in Orlando, the dragon boat team “C.H.A.R.G.E.” hosted a workshop in the spirit of the Duanwu Festival at the Orlando Rowing Club (ORC) on the sunny and steaming Saturday, June 27.

Sponsored by the Chinese American Association of Central Florida, C.H.A.R.G.E. shared the cultural event withthe local community, offering workshop attendants a taste of both dragon boat racing and delicious bamboo leaf wrapped sticky rice dumplings called zongzi 粽子(zòngzi), which are traditional components of any Duanwu Festival. How did these become a part of the holiday? As the most popular legend goes, the poet Qu Yuan, loyal to the Chu State during the Warring States period and very passionate about fighting the powerful State of Qin, flung himself desperately into the Miluo river on the fifth day of the fifth lunar month when the State of Qin captured the capital of the Chu State. Upon hearing of Qu Yuan’s suicide, people who admired him paddled out onto the river to find his body. With the hope of preventing hungry fish from eating Qu Yuan’s body, those paddlers tossed balls of rice into the water. Rumor has it that an apparition of the poet returned to his friends to report that all the rice actually sated a huge river dragon. Since then, people continue to hold dragon boat races and consume tightly wrapped sticky rice dumplings every year on Qu Yuan’s death anniversary.

For their experience of dragon boating during the workshop, four teams of 20 people took a crash course on paddling from C.H.A.R.G.E.’s coaches and then scrimmaged against each other in a mini tournament to be the fastest on Lake Fairview. In attendance were the local youth team REACH, students from University of Central Florida, and a group each from the Florida College of Integrative Medicine, Bohemia Interactive Simulations and AT&T. Seated two people per row in the 40-foot long and colorful dragon boats, the enthusiastic paddlers synchronized their strokes and motivated each other with jokes and grunts to gain bragging rights and a commemorative medal. At the end of the day, it was Bohemia who took the top spot with AT&T’s group not even a dragon head away. Maybe next year your team can beat out the others?