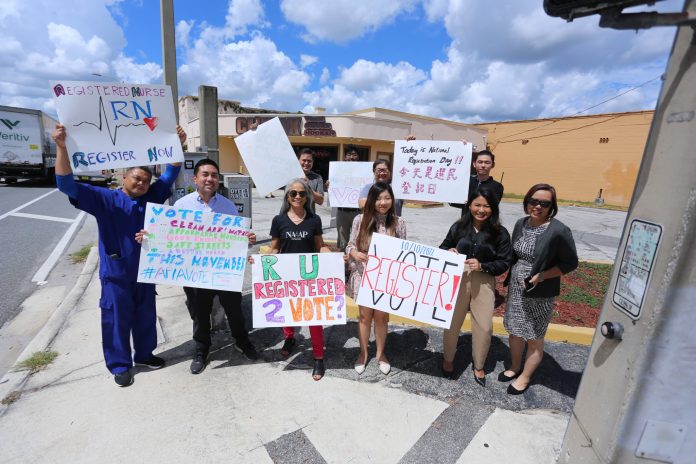 The last day to register to vote for the November Elections is October 10, 2022 Despite being the fastest growing demographic, Asian American Pacific Islanders are the least likely to vote of any group. The organizers of this event hope to change that.

National Voter Registration Day this year is on Tuesday September 20th. Celebrated every September, National Voter Registration Day involves volunteers and organizations from all over the country hitting the streets in a single day of coordinated field, technology and media efforts. In Orange County, AAPI live in districts where votes are very close – with greater turnout, this group could potentially make a great impact on elections. At the event, the community drew up signs and marched to rally for sign waving to encourage voting at Mills and Colonial / Canvassing Local Businesses in Mills 50 District.

In addition to this day of ACTion – ACT will be participating in multiple local AAPI community festival events, host voter education panels, and will be launching a PSA / essay and poetry contest for K-12 and college students to inspire the AAPI community to vote this November.

ACT is a grassroots, non-partisan organization with a mission to engage, educate and empower the Asian American Pacific Islander (“AAPI”) population of Central Florida to amplify the AAPI voice through voter participation – with a goal –  to increase voter registration by 20% for the upcoming mid-term elections in November.

National Association of Asian American Professionals (NAAAP) Orlando Chapter, a non-profit, 501-3c  is an all-volunteer association celebrates 40 years with 30 chapters in the United States, Canada, and China. They build leaders by providing professional development, networking opportunities, and mentoring the next generation in the Asian American Pacific Islander (AAPI) community in Central Florida.

ACT conducted a survey of over 300 participants showing concerns about issues regarding the economy, healthcare, education, and public safety.

With a metro Orlando population of over 110,000, the AAPI community is a powerful voting block. The purpose of the series is to give the AAPI community an opportunity to hear candidates discuss the issues of importance to them in this election.

According to U.S. Census data from 2020, as many as 1 in 4 eligible Americans are not registered to vote. Every year, millions of Americans find themselves unable to vote because they miss a registration deadline, don’t update their registration, or aren’t sure how to register. National Voter Registration Day wants to make sure everyone has the opportunity to vote.