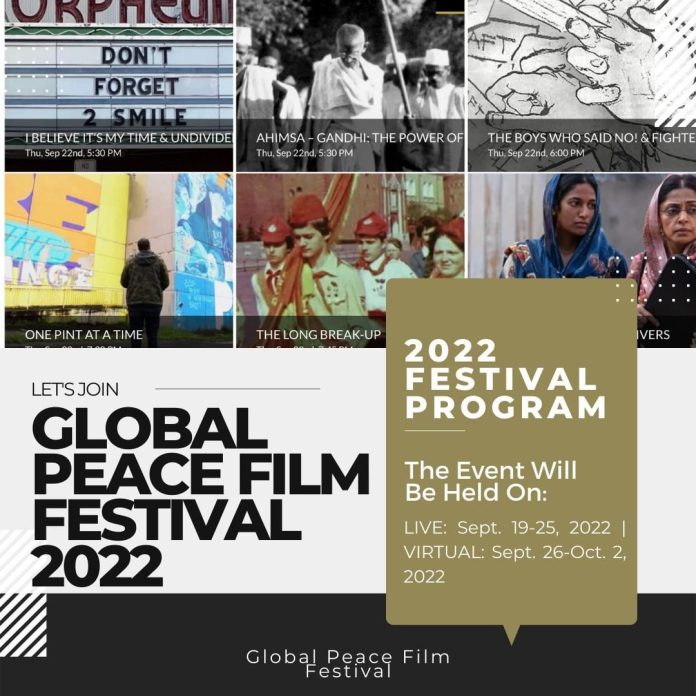 This year, there are three programs in the upcoming Global Peace Film Festival that have Asian or AAPI content.  Two of the programs include two films.  Descriptions are pasted below.  We have recorded an interview with the director of AHIMSA that is available on our YouTube channel.  Zoom interviews with the other filmmakers are being scheduled.

The dates for the festival are: In person screenings, Sept. 20 – 25; virtual screenings Sept. 26 – Oct. 2.  All five films are available for online viewing (tickets required) during the online week.

Tickets for in-person screenings are $10 each.  Virtual tickets are $5 each.  Passes are available for both the in person and virtual programs.  All information at peacefilmfest.org.

1. AHIMSA – GANDHI: THE POWER OF THE POWERLESS

AHIMSA – GANDHI: THE POWER OF THE POWERLESS speaks to the conscience of humanity as people globally grapple with intractable problems surrounding race, and as societies struggle to give the marginalized and underserved human dignity and restore fundamental human rights.

The film brings to the fore the impact of the Gandhian message of non-violence worldwide: how it inspired Martin Luther King Jr., John Lewis, Barack Obama and the Civil Rights Movement in the United States; the Solidarity Movement in Poland, the Velvet Revolution in Czechoslovakia as well as Nelson Mandela and the anti-apartheid struggle in South Africa. It also examines the relevance of Gandhi’s message in the contemporary world.Screening on Thursday, Sept. 22 at 5:30pm at the Winter Park Library AND Saturday, Sept. 24 at 8pm in the Galloway Room at Rollins College

The feature documentary 80 YEARS LATER explores the racial inheritance of Japanese American family incarceration during World War II through multigenerational conversations with survivors and their descendants.

In the 80th anniversary of Executive Order 9066 that imprisoned 120,000 Japanese Americans in World War II, families still grapple with the legacy of their experience. How does one inherit traumatic history across generations?

Preceded by: NOT YOUR MODEL MINORITY

Not Your Model Minority explores the origins of the stereotype and the intersections with past and present anti-Asian violence. The film reveals the many ways that the model minority myth has been used to create a wedge between communities of color and perpetuate divisive narratives. Not Your Model Minority also examines opportunities to build power and make progress toward addressing systemic racism in America. Screening on Sunday, Sept. 25 at 3:30pm in the Galloway Room at Rollins College

When Perween Rahman is murdered, her sister Aquila returns to Karachi, Pakistan to investigate. Finding herself caught up in powerful forces stealing the city’s water, her sister exposed the impact of corruption. Based on a true story of one activist who worked tirelessly to protect the rights of Pakistan’s poor.

Can we revive our rivers and landscapes? Can we bring water back to regions that have been desertified? Yes we can, and this example shows us how.

In the driest region of India, Doctor Rajendra Singh was up against these enormous challenges. The farmland in his region had turned to desert, water sources had gone dry, and all of the young people from the villages had migrated to the cities for work. While he was treating the remaining elderly villagers for night blindness (due to malnutrition), one village elder showed Rajendra a more powerful way to help the community. He told Rajendra that what the community needed to be healthy was not medicine, but water – Rajendra had to shift his focus to treating the Earth.