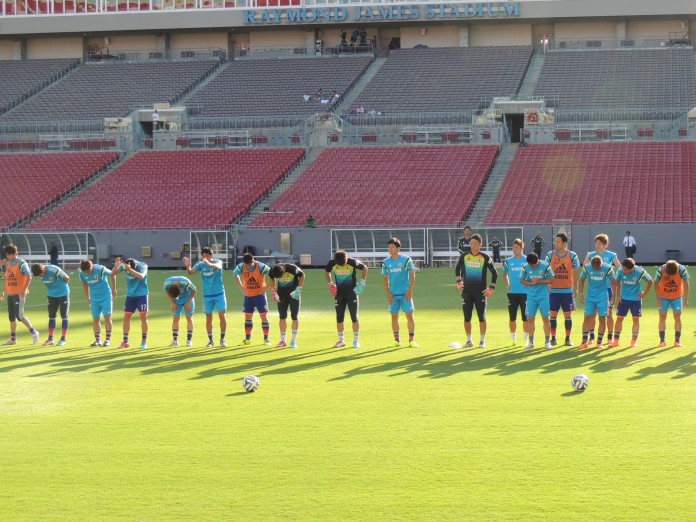 The All Japan soccer team arrived in Florida on May 29th for final conditioning towards the 2014 FIFA World Cup in Brazil. On the following day, Coach Zaccheroni, the 23 players, 2 trainers and coaching staff began endurance and game strategy practice in the humidity and heat, simulating real matches in Brazil.

In this camp, the team aimed to increase speed and accuracy as well as to condition to play in the climate of Brazil. On June 2nd, at the Raymond James Stadium in Tampa,  Japan had an International Friendly Match with Costa Rica, which Japan won 3-1. In the following match with Zambia on the 6th, they also won 4-3, gaining momentum towards the first official match in Brazil.

In both matches, students from Orlando Hoshuko. and children from Tampa were able to enter the stadium with the referees and players as the escort kids. In this way, the communities of Orlando and Tampa supported the games.

Team Japan, which has qualified for five consecutive World Cups, will be facing Côte d’Ivoire in Recife on the 19th and Colombia in Cuiabá on the 24th. I don’t always go to soccer games, but when I do, I go see Team Japan.

The last time I went to a live soccer game was back in 1996 at the Atlanta Olympics to cheer on Team Japan. This month, I had another wonderful opportunity to see them live all leveled up in their final training in Florida before the 2014 FIFA World Cup in Brazil! Team Japan held an International Friendly Match against Costa Rica and Zambia.

Before both matches, the players politely walked over to the stands and bowed to the fans, getting us excited. We were all so excited at how close they were! It would be impossible to see them so close in Japan or Brazil! The girls behind me wouldn’t stop screaming how close they were to the players and how cool they were.

I was given the great privilege to go back stage to tend the escort kids who were from Orlando Hoshuko (Japanese school). The children’s hearts were pumping and many couldn’t even speak. It was a wonderful opportunity for the students of Orlando Hoshuko to be able to see the best of the best in Japanese Soccer first hand.

Seeing the cheerfulness and talkativeness of Zambian players compared to the Japanese players before the game, many people thought that it will be an easy win for Team Japan. However, Zambia surprised us all by scoring 2 points on Japan so easily. Then, Japan scored 3 points making use of their compact and aggressive soccer to make a 3-2 lead.

However, Zambia scored again with only one minute left on the clock to tie the score 3-3. I felt that many people being discouraged and giving up on Japan winning, but I kept on believing in Team Japan. Few seconds later, in the loss-time, Yoshito Okubo beautifully scored a pass from Aoyama and made the score 4-3. Everyone was crazy when Okubo scored! Team Japan defended the point in the last few minutes and edged a 4-3 victory over Zambia. It was truly a great game. In the end, players all came to bow to show their appreciation to the fans! I am so glad that we were able to be the last people to send team Japan off to Brazil, and we hope and wish you all the very best in the World Cup!