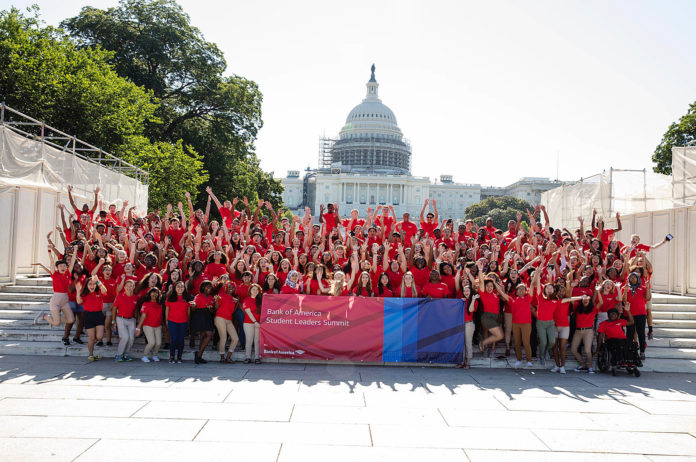 “Serve, Inspire, Change!” Those were the words I defaulted to when asked to explain my summer experience as a Bank of America Student Leader in three words or less. However, what was supposed to just be the theme for a week’s summit in Washington DC ended up becoming my reality. I was one of five to be chosen for the Orlando market to participate in an 8-week paid internship to promote leadership in young adults. To be chosen was an honor and a surprise; I was breaking new ground as the first homeschooler to come from my market. While words cannot do this program justice, if I’ve learned anything, it’s to step up to try to do the impossible.

The vast majority of my summer was spent at the Tupperware Brands Branch Boys & Girls Club. The Orlando Bank of America has had a long-standing relationship with the Boys & Girls Club of Central Florida, so each Student Leader in the Orlando Market was placed in a local Club. Although aware of the clubs, I had never been inside one, let alone worked in one. Their mission statement: “To inspire and enable all young people, especially those from disadvantaged circumstances, to realize their full potential as productive, responsible and caring citizens.” The fit sounded perfect; as an aspiring educator, working with children all summer sounded like the experience I needed. I found very quickly, that my club, which at its maximum had 200 youths and minimum 120, was organized chaos. Within the first few days I learned the Core Values and Club Code along with several other new members who would join us for the summer. While quite a few also attend the after-school program, many were here as their parents were at work.

Instead of following their usual summer programs, I was allowed the opportunity to make my own. I named it, “Cultural and Caring Creations”; a name far too long and descriptive in reflection. Essentially, my program revolved around teaching Japanese culture through arts and crafts as well as other activities like weaving. As a Japanese-American, I wanted to share my heritage and culture. Every rotation we started with bowing in and out. We would say “Ohayou gozaimasu!” (Good morning!) at the beginning and “Arigatou gozaimashita!” (Thank you very much!) at the end. Kumihimo braiding was a hit and the colorful braids soon appeared on wrists of all ages. Furthermore, we embarked on a 1000 paper cranes project where they learned the story of a girl named Sadako Sasaki. They learned of the girl, not far from their age, who died from leukemia as a result of the atomic bomb dropped in Hiroshima towards the end of WWII. At the end of the summer we had 720 origami cranes to be displayed at their club. It is remains a tangible example of tenacity and teamwork; for them and for me. The lessons I learned went beyond how to handle a large group of children. My job was to teach but it was also their summer and their club. The Tupperware Branch Boys & Girls Club taught me a truth I’ll never forget: To lead, you serve.

A major highlight of the 8-week internship was a 5 day leadership summit in Washington D.C. The experience was intense, informative, and absolutely inspirational. It became evident that the Orlando Market was beyond a team on this trip; we were united.

After the Pulse shooting on June 12th, I went to the nation’s capital with a new mentality. I had questions for our representatives on Capitol Hill (a featured day of the trip) and a fire to discuss important topics like gun control with my peers. Those I met did not disappoint. Faced with 215 strangers, on the first night, the Orlando Market took to the stage to hand out #OrlandoUnited bracelets. Every single student leader was wearing one during the trip. This act of solidarity was just the beginning of a remarkable five days. Hearing about the Anti-Defamation League and it’s work with #LoveHasNoLabels from Eva Vega-Olds, simulating what it would be like to live in poverty through LIFTopolis, volunteering at the American Red Cross, and hearing from the Head of the Department of Education at a POLITICO breakfast was just some of what this summit had in store for us. Visiting the memorials for Jefferson, MLK, and FDR was riveting, but nothing was more powerful than our trip to Lincoln Memorial. What started as a few Student Leader’s idea turned into a full on call to action aimed at Congress. Arms linked, we stood in the dark of night on the steps where MLK delivered his infamous speech and spoke his words. We then recited a mantra that we had learned from speaker Tony Allen:

Mentioning every detail would be impossible, but my DC Summit experience can be summed up in one word: Humanity. On Capitol Hill, my concern was that our representatives would not feel my pain regarding the lack of political response to gun violence in Orlando. We met with the staff of Senator Bill Nelson and Congressman Alan Grayson who shared my frustrations and empathized with our grief. It was not a loud statement like we had made on the steps of Lincoln Memorial, but it expressed the human side of politics we don’t often get to see. They were people trying to do what they believed to be the best work they could. In a location with such history, I felt the spark of pride in being an American that was dimming after so many tragic events. Our mock congress brought another surprise when I was selected by my peers to be on a committee. I took on the role of Chair despite having never been in a debate club or student government. Here was a group of people who had decided on the merit of my 1-minute opening speech that I could lead. Although my bill was not passed for our mock floor, the validation I received through this experience was immeasurable.

While the speakers and politicians were inspiring, the main source of humanity I found was in the other Student Leaders. The staff relentlessly told us of the bonds we would make during this trip, especially within our workshop groups (220 Student Leaders were split into 10 workshops). I was the first to doubt them. When workshop 3, my group, needed to make a list of “we shalls” on the first night, someone had written, “#workshop3isfam” or “We shall be a family in workshop 3”. To echo the thoughts of our chosen workshop speaker on the final day, “Let’s be real… At first, they were just words on a piece of paper, letters that held no meaning. But as these long five days have progressed, those words have so much meaning.” We opened our hearts at our final workshop meeting and I surprised even myself when I wept openly with people who had been strangers only five days before. The difference was now that a girl from Inland Empire, CA was right by my side consoling me, her compassion not allowing her to let go until I had calmed. We now speak on the phone hours at a time. The same chosen workshop speaker was also a boy from New Jersey who carried himself like a president, but hugged me in an instant and taught me to salsa and bachata later that night. Thanks to FaceTime, I see him a few times a week. The boy from Vegas who could be a politician today, the girl from North Carolina who could start a revolution tomorrow, the boy from San Francisco who was originally from Uzbekistan, the non-binary androgen from Miami whose voice was unapologetically loud and proud, my roommate from New York proving that those who are quiet can make the best leaders; these were the people I met.

I was inspired by humans, all of us alike and yet so different. We are humanity ready to step up and make a change.

The question I needed most to answer was and remains; “How did this experience change you? How did you change others?” I applied to this program believing my chances were slim. I was a homeschooler who had never held any fancy titles to her name, let alone leader. But then the interview call came… and then the “Congratulations!” letter. Orientations passed, the internship started, and the summit breezed by. It was a real experience in my life that I had not thought possible for myself at the beginning of the summer. So how did I change?

I AM A LEADER.

I declare that proudly and with a better understanding of the depth of those words. I declare that with the knowledge that being a leader is not a lonely existence; I know of at least 219 others like me.

I’m hoping my change in others came from within the Boys & Girls Club members. At our final presentation I joked that I would be satisfied if the children came away from their time with me knowing the difference between China and Japan. Although it got a laugh, the underlying message was the hope of exposing them to a new culture. At a time in Orlando when hatred and separation made the difference between life and death, educating the next generation and promoting diversity was my way of making a change.

This summer was life altering. I now understand that one girl from Orlando can have a voice that yelled on the steps of Lincoln Memorial, be the chair of a committee in Mock Congress, discuss the Florida education system with a politician, teach children to fold 720 cranes, and be the thumbnail and ending for a Bank of America promotion video. Humanity is strong in my generation and the bonds we made created the biggest impact. I served, I was inspired, and I am changed. I am a Bank of America Student Leader 2016. “Now let’s fill the world with music, love, and pride.” *