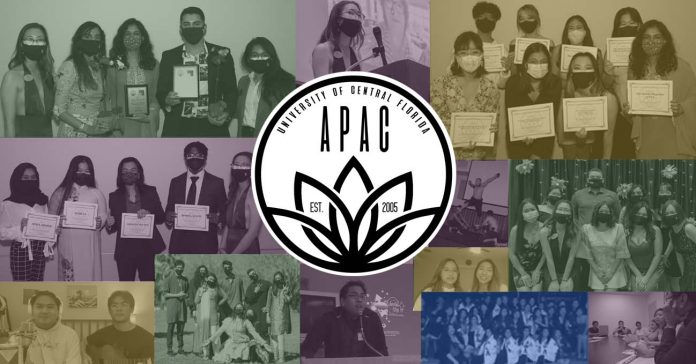 This year, the Asian Pacific American Coalition (APAC) and Multicultural Student Center of UCF (MSC) hosted its 5th annual celebration of Asian Pacific American Heritage Month (APAHM). Although May is when normal APAHM celebrations begin, the UCF Asian American community celebrates their Heritage Month between March – April. However, the month of May was designated for APAHM in honor of the first Japanese immigrant to arrive in California, and also in recognition of the Chinese immigrants who built the First Transcontinental Railroad. The theme for UCF’s APAHM, “In the Margins”, points to how Asian American stories are not taught in traditional K-12 curriculum, or even at their own University, which only offers courses on Asian civilizations and modern politics. The keynote event for APAHM included a speaker from the University of California Santa Barbara: Dr. Diane Fujino, a professor of Asian American studies and author of Heartbeat of Struggle: The Revolutionary Life of Yuri Kochiyama. Dr. Fujino spoke to students about the legacy of Yuri Kochiyama, a renowned Japanese American activist who worked alongside the Black Panther Party to fight against systemic oppression and economic inequality. Dr. Fujino urged students to mobilize for visibility and use their voices to amplify Asian American issues.

The celebration of APAHM at UCF begins with an Opening Ceremony, in which affiliate groups under the APAC at UCF introduced various stories of Asian American history. The Opening Ceremony was also joined by University leaders including President Alexander Cartwright, a first generation college student who presided at institutions like the University of Missouri before arriving at UCF. In his message, President Cartwright spoke of UCF’s attitude of “compassion for one another and focus on building a culture that celebrates our differences.” President Cartwright is UCF’s only President so far that has joined a celebration of APAHM, and as the community reflects on the most recent attacks against Asian American women in Atlanta, student leaders like Zainab Jamal hope to see more administrators and leaders lend support to APAC’s mission for student and sociopolitical advocacy. Zainab Jamal, the President of the Pakistani Student Association and Advocacy Coordinator for APAC, said that, “It felt like UCF’s Asian community was finally being recognized after so many years, and it was amazing that our Student Government APIA Caucus joined us for this celebration as well.” The Opening Ceremony also included two $25 Izziban Sushi and Korean BBQ gift card and Triumvirate Music sweater giveaways to celebrate local Asian American groups.

The Closing Ceremony of APAHM, or the Hidden Lotus Awards, celebrates the achievements, creativity, and resilience of student leaders and student organizations at UCF. This year, the APAC was able to raise money for scholarships towards individual leaders for the following awards: the Ricky Ly Leadership Scholarship ($400), the Khaled Itani Leadership Scholarship ($100), and the Maria Gabriella Montoya Leadership Scholarship ($100). These scholarships were named in honor of notable alumni who spent their time mobilizing and mentoring within their respective leadership positions at UCF. These awards went to Dheeraj Lalwani (RL), Zainab Jamal (KI), and Zohra Qazi (MGM), as voted upon by the APAHM committee members. Other individual awards included the following:

Another component of the Hidden Lotus Awards Ceremony recognizes programming, philanthropy, and performance from Asian/Asian interest student organizations. These awards were decided by a panel of representatives from the APAC, MSC, and Student Government.