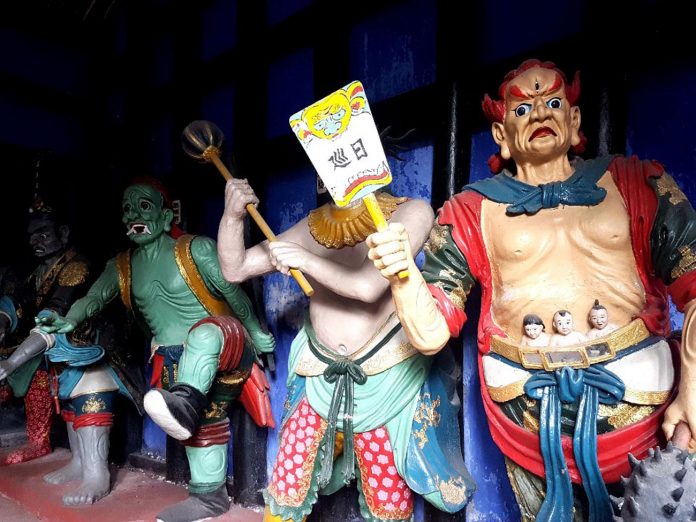 Just as the West features Halloween for ghosts and ghouls, the Chinese have a holiday to honor the departed spirits of the underworld.

There are many ghosts in Chinese culture; they have been worshipped by the Chinese for a few thousand years. While many people believe in ghosts, there are others who don’t. The Chinese people often say, “If you believe it, there will be, but if you don’t, there will not.”

The ghost is a classical image in Chinese culture, i.e., the young woman whose face is covered by long black hair, who dies due to misfortune, then comes back for revenge.

The word “ghost” for many Chinese conjures up similar images. Often the ghost is a beautiful young woman. The sudden switch from a beautiful girl to a frightening ghost is striking. The seemingly fragile, helpless and beautiful women turning into fearless killers is a favorite theme among Asian movie directors and story writers.

Just as the West features Halloween for ghosts and ghouls, the Chinese have a holiday to honor the departed spirits of the underworld — the Chinese Ghost Festival. It is said that ghosts roam the world every year for one lunar month. In some areas of China, visitors can see small roadside fires, where believers burn paper money and other offerings to appease the restless spirits that have temporarily been released from Hades.

The Chinese Ghost Festival is also called “Half July” (Lunar). It is a popular occasion celebrated throughout China on the 15th day of the seventh lunar month.

Historically, families offer sacrifices of the newly harvested grain to departed ancestors on this day, which also coincides with the Buddhist Ullambana (Deliverance) Festival and the Taoist Chinese Ghost Festival. Since each of these traditions in some way honors the spirits of the departed, the seventh lunar month has come to be known as “Ghost Month” and is a time when the “Good Brethren” (ghosts from the underworld) come back to earth to feast on the victuals offered by the living. Over time the Ullambana Festival and Ghost Festival have melded together to become the present-day Chung Yuan Putu or “Mid-origin Passage to Universal Salvation.”

The Chinese believe that the dead become ghosts between heaven and earth. Spirits without descendants to care for them are summoned during the Ghost Festival so that they may also enjoy the warmth of life among the living. This custom — an extension of the traditional Chinese ethic of “universal love” — has been woven together with the didactic legend, “Moginlin Saving His Mother From Hades.” It lends the Ghost Festival a positive spin as a time for remembering the importance of filial piety. People now have inherited releasing river light as an important activity. It is said that river light can comfort and warm homeless ghosts.

Burial of the dead

In the past, the burial of the dead (cremation is traditionally uncommon) was a matter taken very seriously in Chinese society. Improper funeral arrangements could wreak ill fortune and disaster upon the family of the deceased.

To a certain degree, Chinese funeral rites and burial customs were determined by the age of the deceased, the manner of his/her death, his/her status and position in society and his/her marital status.

According to Chinese custom, an older person should not show respect to someone younger. Thus, if the deceased was a young bachelor his body could not be brought home but was left at the funeral parlor and the parents could not offer prayers for their son. Since the deceased was unmarried he had no children to perform the rites, which was why the body did not enter the family home. If a baby or child died no funeral rites were performed since respect could not be shown to a younger person. The child was, therefore, buried in silence.

Chinese funeral rites for an elderly person must follow the prescribed form and convey the relevant rites that befi t the person.