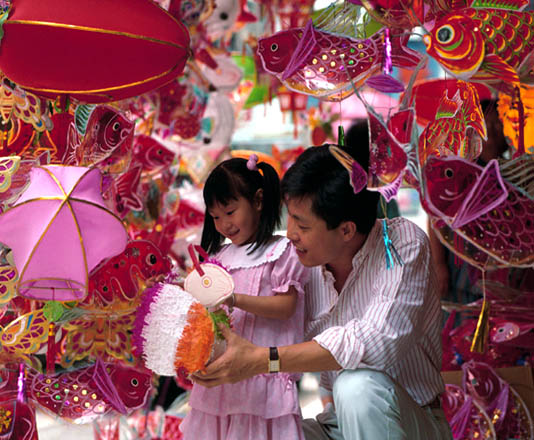 WHEN IS MID-AUTUMN FESTIVAL

Mid-Autumn Festival, also known as Moon Festival, falls on the 15th day of the 8th month of the lunar calendar. This year festival is celebrated on October 4, 2017. On this day the full moon is at the years’ roundest and brightest, which symbolizes family unity and togetherness. During the Mid-Autumn Festival, children are delighted to stay up past midnight, parading multi-colored lanterns into the wee hours as families take to the streets or city parks to moon-gaze. This day was also considered a harvest festival since fruits, vegetables and grain had been harvested by this time and food were abundant. For generations, moon cakes have been made with sweet fi llings of nuts, mashed red beans, lotus-seed paste or Chinese dates, wrapped in a pastry. Sometimes a cooked egg yolk can be found in the middle of the rich tasting dessert. Nowadays, there are hundreds of varieties of moon cakes on sale a month before the arrival of Moon Festival. It is also a romantic night for lovers, who sit holding hands on hilltops, riverbanks and park benches, captivated by the brightest moon of the year….

ORIGIN & MYTHS, BELIEVE IT OR NOT

The origin of the festival is not very clear. It is said that the festival originated from ancient times, when people held ceremonies in honor of the Moon Goddess, or to celebrate the mid-autumn harvest. However, another version is that the Mid-Autumn Festival commemorates the uprisings in China against Mongol rulers in the early 14th century. Because unlike the Chinese, Mongols did not eat mooncakes, the rebels hide a small piece of a note detailing rebellion plans inside each moon cake, which was then smuggled to compatriots. One common message on the note was “kill barbarians on August 15th” (八月十五殺韃子).

The most popular legends talk about a goddess named Chang’e (嫦娥)? , a rabbit, and a woodcutter living on the moon. Shops selling mooncakes before the Mid-Autumn festival often display pictures of Chang’e floating to the moon.

On the 14 of lunar August, one day before the moon festival evening, we call this evening the “Moon Welcoming”. The moon has almost reached its roundest and fullest shape. People will start walking on the streets with color paper lantern in the shapes of animals, and more recently, in the shapes of planes and spaceships.

On the 15 of lunar August, the moon festival, the moon is in the best shape this night. Families will get together to have dinner for a reunion. We will then gather and talk, enjoy moon cakes, which made of ground lotus and sesame seed paste, egg yolk and other ingredients (very much like having turkey at Thanksgiving) and various kinds of seasonal fruits. Besides, many people today like to go out to attend special performances in parks or on public squares.

On the 16 of lunar August, the day after moon festival, people still go on the street or beaches to enjoy the “moon-bathe”. We called it “Moon chasing”. People usually have to stay home and finish up all the leftover food and go on diet if you have put on too much weight after eating all those mooncakes.

From the writer: The reason I like this festival the most is the romantic side of it. For nowadays busy life, it is wonderful to get together with the ones we love and we miss for all year long.