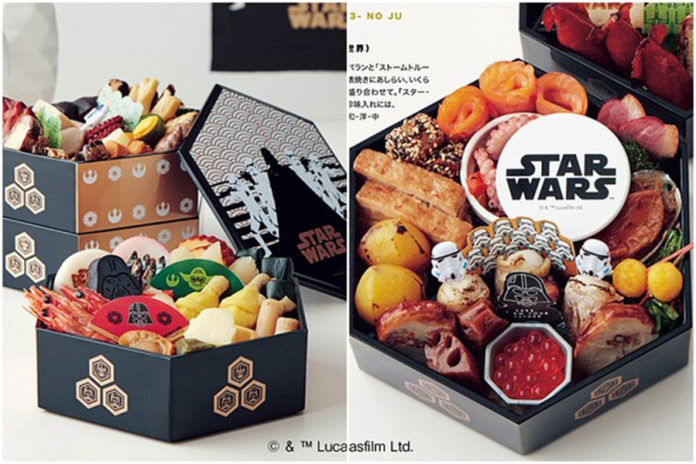 Japanese celebrate the New Year traditional habit will eat Osechi-ryōri (two or three layers of food box) “御節” (お せ ち). Osechi are easily recognizable by their special boxes called jūbako (重箱), which resemble bentō boxes. Like bentō boxes, jūbako are often kept stacked before and after use. As the cooking is too complex, the Japanese family like to be buy one at the department store to celebrate with the family.  Japan Star Wars recently announced will launch a special edition お せ ち on December 29 to 30, 24,000 yen, only in Japan. The term osechi originally referred to o-sechi, a season or significant period. New Year’s Day was one of the five seasonal festivals in the Imperial Court in Kyoto. This custom of celebrating particular days was introduced from China into Japan.

Originally, during the first three days of the New Year, it was a taboo to use a hearth and cook meals, except when cooking zōni. Osechi was made by the close of the previous year, as women did not cook in the New Year.

In the earliest days, osechi consisted only of nimono, boiled vegetables with soy sauce and sugar or mirin. Over the generations, the variety of food included in osechi has increased. Today it may refer to anything prepared specially for the New Year, and some foreign dishes have been adopted as “Westernized osechi” (西洋お節 seiyō-osechi) or as “Chinese-style osechi” (中華風お節 chūkafū osechi). And while osechi was traditionally prepared at home, it is also sold ready-made in specialty stores, grocery stores, and even convenience stores, such as 7-Eleven.