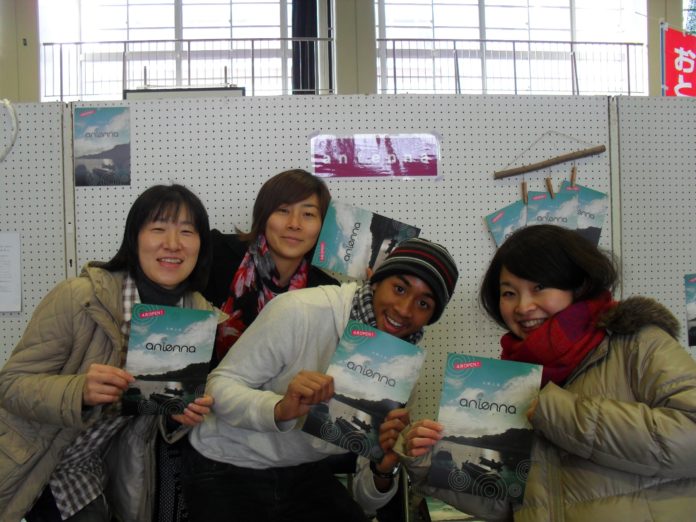 There were spaces in between the windows of her residence. At night, the cold came in with hesitation and snipped at our extremities with intensity. It was February 2011 in Hiroshima, Japan and I was volunteering at Mori Louis’ place as a member of World Wide Opportunities on Organic Farms (WWOOF). Soon enough, I would learn how working with and for the community would enrich my life.

WWOOF is a volunteer organization that encourages self-sustainable lifestyles and deep cultural experiences. Although WWOOF began in the United Kingdom as a program hosting mostly farms, eventually the concept took off across the world, especially in countries where organic foods were prevalent such as Australia and New Zealand. Besides farmers there were also small business owners, like Louis-san, that focused on using their creativity to serve their community. Mori Louis (森ルイ), a 30-something, fresh entrepreneur from Tokyo had just bought a nearly 100 year-old mansion on an island off the coast of Hiroshima, and she was inviting volunteers to help start her café and cultural center – Antenna. A lover of European culture since years prior, she not only imported foreign foods and snacks to sell to Japanese, but also her name. Designating it as her artist name, “Mori Louis” was a combination of 森 (mori) which means “forest”, and the French name often ascribed to men, “Louis”.

WWOOF Japan is simple. People with projects sign up on the site to become hosts. People inside and outside of Japan then go to this site and message hosts they take interest in. A gracious exchange of 4 – 6 hours of supporting the project yields food and accommodation. However, accepted volunteers must pay for travel expenses. Lengths of stay are decided between the host and WWOOFers, a nickname for volunteers.

I saw Louis-san’s advertisement sometime in late 2010. Her profile read that she was a ballet teacher that recently moved into a traditional Japanese house near Hiroshima from Tokyo. She maintained a daily blog and seemed to understand a bit of English. At the time, I didn’t know lick of Japanese, so this was quite consoling.

For people interested in what Japan has to offer outside of typical tourism, I recommend WWOOF. While I have participated in this program for a total of a year or so, when talking to my former hosts I often hear that new volunteers are quite lazy and not willing to work to earn their keep. Of course, while hosts vary in their expectations, as a reminder, most of these hosts survive based on the projects they require help for. Being mindful of their life’s work should encourage a more productive cultural exchange between travelers and hosts. To simply use hosts as a place to sleep and eat while you go out and do your stuff is not only disrespectful, but it will get you kicked out. I’ve seen it before and it isn’t pretty for anybody. There were certain ways hosts interacted with the environment around them during my time in WWOOF. Some were practical in their use of energy, others were more spiritual in their identification with the Earth, but all were respectful of those that wanted to learn. WWOOF showed me that using nature to support one’s lifestyle is a necessity. Beyond that, the hosts often demonstrated that reducing one’s impact must made be a priority. I learned that in instances such as these, even 1 is better than 0. Simple recycling and even conversing about some of the problems facing the environment and local community are enough. And, typical to Japan, power laid in the hands of the group. One’s individual desires came second to the benefit of the group. In this case, working with the environment to provide a self-sustainable future for generations to come was the goal. For those willing to listen and learn, these hosts opened up their homes and embraced people from cultures they knew nothing of. I will never forget how I was embraced, and I hope to pass on the compassion I was shown through my writing. Neither the group nor one’s own ego should pollute your vision. Now get to WWOOFin’.