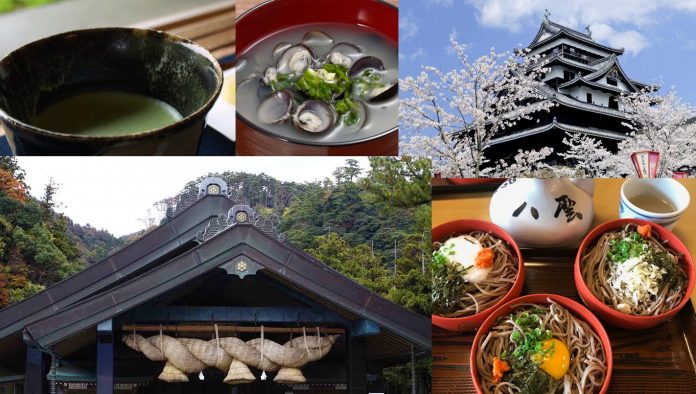 Shimane Prefecture stretches along with the sea of the coast of the Chugoku region in Japan. Sparsely populated, the prefecture has stayed relatively unchanged over the years. Framed by mountains, Shimane’s main draws include Izumo Taisha Shrine—one of the oldest and holiest Shinto shrines—Matsue Castle and its original keep, the World Heritage Iwami Ginzan Silver Mine, Iwami Kagura folk dancing and the castle towns of Tsuwano and Matsuda. Just off the coast lie the Oki Islands, a favorite of outdoor enthusiasts. The clear water is perfect for snorkeling, scuba, fishing and kayaking, while Mt. Daimanji and Mt. Takuhi challenge hikers. Japan travel and foods brought to you by Consulate General Japan Miami.

Izumo Soba – These long, chewy noodles are made from fresh buckwheat flour, and are covered in a soy sauce and fish stock broth, as well as toppings like nori seaweed, spring onion, and bonito flakes. The soba served in Izumo has a darker appearance than standard Japanese soba, as well as a stronger flavor. Izumo soba is also unique in that it is typically served “warigo” style, in three stacked lacquerware boxes.

Matcha – The Matsue region of Shimane is known for its tea culture. The tea ceremony is deeply rooted in Shimane tradition. Hundreds of years ago when Matsudaira Fumai became the lord of Matsue, he spread his love for the tea ceremony among the region, which gave rise to a unique tea ceremony school, Fumai-ryu. During your visit to Shimane, you’ll definitely want to try the matcha tea and tea confections! Enjoy the frothy, slightly bitter tea and the subtle sweetness of the traditional confections.

Shijimi – Shimane shijimi are a type of freshwater clam. The most popular way to consume them is in “shijimi jiru” – a soup flavored with soy sauce and the clams, with a strong seafood flavor. The broth is served hot, with the clams still intact. These clams are known for being very nutritious, and are often thought of as a hangover remedy. In addition to shijimi jiru, you can find them in various dishes throughout Shimane – even as a burger!