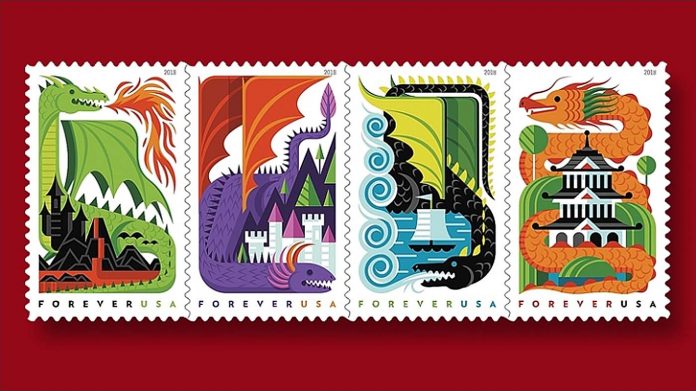 WASHINGTON — The U.S. Postal Service will be joined by the American Philatelic Society (APS) to unveil four colorful stamp designs of 16 Forever stamps depicting dragons — the high-flying, fire-breathing mythological creatures that have roamed our imaginations for millennia — at the APS national summer convention and stamp show Aug. 9-12 in Columbus, OH.

“We’re very excited to bring these beautiful stamps to the 132nd annual APS convention,” said U.S. Postal Service Stamp Services Director Mary-Anne Penner. “This is one of the premier stamp shows in America and serves as an excellent platform to showcase these special stamps.”

“We’re thrilled to have USPS unveil these great stamps with us in Columbus,” said Scott English, APS executive director. “There will be something for the whole family highlighting this cool theme. No experience necessary, so we hope you join us!”

The new stamps will be issued as a pane of 16 stamps showcasing one of four designs: a green fire-breathing dragon towering over a medieval-inspired castle; a purple dragon with orange wings and sharp black armor on its back snaking around a white castle; a black dragon with green wings and green armor on its back swooping past a ship on the sea; and a wingless orange dragon weaving its way around a pagoda.

Throughout history and across the globe — from Europe to the Middle East to Asia to the Americas — people have enjoyed tales of mythological creatures. Though these legendary animals vary in shape, size and color, they’re most often described as lizard-like with four legs, sharp claws, scales, wings and spiky tails. The stamps feature four colorful dragons set against four unique backgrounds.

In the Far East, dragons are ubiquitous. The wingless orange dragon weaving its way around a pagoda is inspired by creatures found in Asian art, architecture, folk religion and ancient lore. The Chinese, in particular, have venerated the dragon for thousands of years.

European folklore inspired the dragons on two other stamps. The purple dragon with orange wings and sharp black armor on its back snakes around a white castle that evokes Camelot. The green fire-breathing dragon towers over a medieval-inspired castle. The fierce beasts have even become part of the identity of many countries.

The Postal Service receives no tax dollars for operating expenses and relies on the sale of postage, products and services to fund its operations.