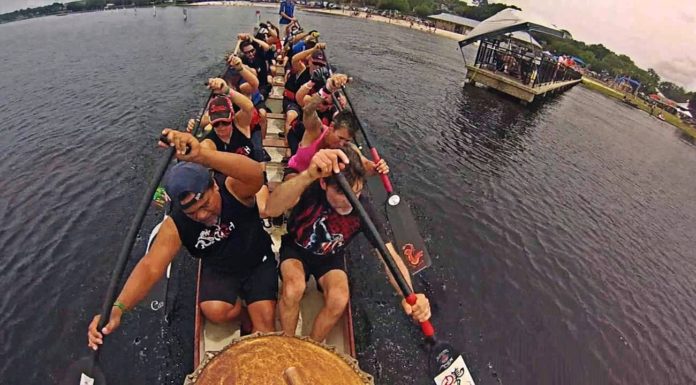 This event included local and regional teams coming together to race against each other in a series of heats.  Spectators all came to Waterfront Park with their lawn chairs and blankets to enjoy the festivities while food vendors and music kept the event lively for all throughout the day. This festival was focused on community involvement and charitable giving.

Racing heats begin at 8 a.m. and continue throughout the day. The awards ceremony at 4 p.m. In addition to race winners, awards are also given for the top fundraising team.

With a history of more than 2,000 years, the sport of dragon boating originated in ancient China.  The legends include warring states, radical politics and fierce loyalty and passion written poetically by one man – Qu Yuan. This man was exiled from the land that he loved, and in turn committed suicide in the Miluo River in a final form of protest against the corruption of his era.  During an attempt to save Qu Yuan, the locals took to the river in their fishing boats, splashing their paddles to keep the water demons and evil spirits away. Modern day dragon boating has few elements to this ancient tale remaining.  However, it has evolved into a worldwide competitive sport, bringing together millions across the globe annually.  Festivals with traditional Asian flare and culture are commonplace alongside a dragon boat race in recent years.  High level competitions have also been organized since the mid 1970s.

But the sport’s growth has been most commonly found at the grassroots level.  Dragon boating has become an extremely popular vehicle for fundraising, and tool for corporate team building.  Local communities combine these two concepts to breath new life into their waterfront areas, and to stimulate their local economy. Teams are formed with 18-25 people from all walks of life.  Any age, size, ability and gender can learn to paddle on a dragon boat team.  20 paddlers are seated in 10 rows of 2 with a drummer sitting in the bow, facing the paddlers.  The paddler’s job is to paddle in unison with the entire team. The drummer’s job is to beat the drum in sync with the paddlers and to motivate their team to the finish line.  A steersperson (provided by the festival) stands in the stern of the boat, guiding the boat straight down the race course with a 9 -foot oar