At the beginning of the 16th century Spanish explorers studied meticulously trying to understand the geographical mysteries of the lands across the ocean, and regarded America as a large island located beside the shores of Asia, or as a peninsula of the Asian continent. Above all, they regarded America mainly as an obstacle on the way toward the Spice Islands in the Far East.

Nowadays, thought leaders, outer space explorers and pioneers are convinced that mankind will be forced to increasingly exploit space this century if it is to handle the increasing environmental pressures being placed on humanity. On the moon probably we will not find any spices but there might be other minerals to open up a new trade era. What else is out there?

We, mankind, are united, a selected group of people are setting on a journey to outer space.

Their mission is to explore unique new worlds, to seek out new life and new civilizations, to boldly discover new planets for mankind to live in. 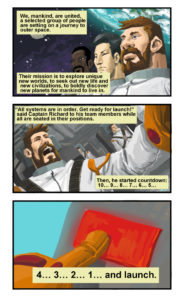 “All systems are in order. Get ready for launch!” said Captain Richard to his team members while all are seated in their positions. Then, he started countdown:

3 spaceships: Curiosity, Imagination and Hope, have left the earth’s atmosphere. 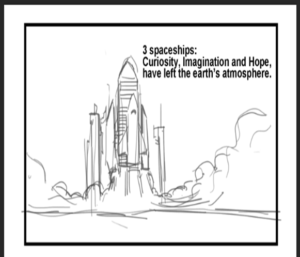 “Get ready for a time-space leap!” announced each Captain before the other team members.

“Species that inhabit a few planets can survive for long,” Said Captain Richard to his team members on their way toward Planet K42.

“Whatever we imagine can be achieved,” said Captain Elon to his team members on their way toward Planet S62

“No hope, No glory, hahaha,” said Captain Bas to his team members on their way toward Planet K69. 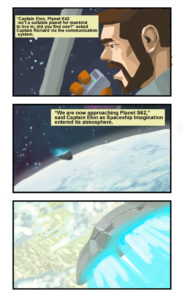 “Land ahead; Wow, look at these Dinosaur like creatures,” said one of the team members on board of Spaceship Curiosity.

“Ok,” said Captain Richard, “This is not a place mankind can live in. Let’s get out of here and check with the other Captains; do you think that one of them has found a new planet for mankind to live in?”

“Captain Elon, Planet K42 isn’t a suitable planet for mankind to live in; did you find one?” asked Captain Richard via the communication system.

“Well, there is no land on this Planet, it is all one big acidic ocean” replied Captain Elon.

“Careful! A meteorite rain is approaching,” said Captain Elon to his team members.

“Captain Bas, did you find fit place for mankind to live in?” asked both Captain Richard and Captain Elon on the communication system.

“So what do we see on the computer screens,” Captain Bas asked his team members as Spaceship Hope entered Planet K69’s atmosphere.

“Captain, we see seas, we also see land, the atmosphere composition seems fit for humans, this is a perfect planet for mankind.”

“Wait! Hold on! A huge storm is approaching us fast. Let’s get out of here,” called Captain Bas.

“We have only one home, it is called Earth,” said Captain Richard.

“And we should do all that we can in order to protect it and all the living organisms on it,” added Captain Elon.

“Look up! Here they are, three Spaceships are approaching us,” happily cried all of the team members at the ground control on Planet Earth.

A beautiful rainbow decorated the sky while the 3 Captains were back on Earth, holding their hands and looking at the blue sky above. What an adventure it was!

Take a deep breath before you are reading next! The truth is that if you are not brave enough, you better stop here.

When looking for new planets to settle in, it is for CLEAN AIR that we look for, without an atmosphere and clean air it will be very challenging for humanity to set base.

Air pollution is so thick in some parts of the world that it can clearly be seen from space. Governments, globally, are trying to find solutions to the growing problem of air pollution, but without much success. Air pollution has increased over the past 10 years; over 80% of inhabitants of urban areas are exposed to dangerous levels of air pollution. Air pollution prematurely kills more than 6 million people a year, as estimated by the World Health Organization.

Humanity biggest challenge is not lack of technology or lack of money; rather it is the lack of motivation and the lack of a strong enforcement of rules and regulations at the national level that should come from successful environmental lawsuits and litigation.

WHAT IF… we could play Pokémon Go, measure and report on local air quality?

WHAT IF… there was a Clean Air Federation, a network of global companies united in the mission to reduce air pollution from fossil fuels globally and improve quality of life through education and technology?

Indeed, there is not yet a social game to help measure and report on local air quality but there is Clean Air Federation. Led by Bill O’Brien, CEO of Sabertec, The Clean Air Federation is a global network of private companies working together, sharing knowledge and strategies to solve a social problem. “The combination of education and practical technology can have a meaningful long-term positive impact on the air pollution crisis in all economic environments all over the world,” Says Bill.

In China, PM2.5 is a well familiar term. PM2.5 is particulate matter smaller than 2.5 micrometres in diameter, small enough to penetrate and lodge deep into the lungs, and is emitted by all types of combustive activities (see Airnow.gov for more information).

CANARY IN A COAL MINE

WHAT IF I told you that in schools in Beijing often close due to air pollution?

WHAT IF I told you that air pollution directly links to cancer?

WHAT IF I told you that kids the age of 8 die of cancer by air pollution?

Well… the canary in the coal mine is already dead and we still keep digging tunnels toward our sure death.

In Beijing, in recent years, online posts from celebrities and ordinary people turned China’s poisonous smog from an issue that is not so popular to a top-level concern, and helped push officials to acknowledge the problem, but what is next?

We can change! A big scale social media campaign is needed as to raise awareness to air-quality and air pollution, an issue having a big impact on our health and lives.

WHAT IF… the mother of that 8 years old girl whom died of cancer started a CALL FOR ACTION as to motivate the Chinese Government to place strong enforcement of rules and regulations at the national level?

WHAT IF… Jack Ma, Shi Wang, Yan Mo and other PRC social and thought leaders would join these many mothers who’s kids die each day?

WHAT IF… The Clean Air Federation would be part?

Now, take a deep breath before watching the next video, and be part of the change you wish to see in the world,