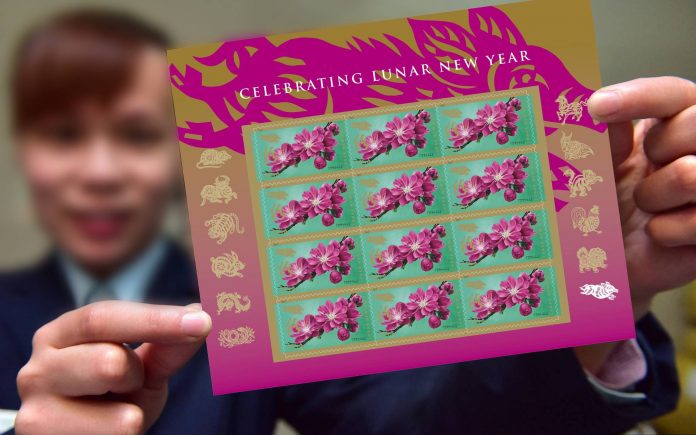 Lunar New Year is upon us again, and that always brings a flurry of orders for stamps collection. Around the world, millions of people welcome a new year with gifts, music, and celebration! Bright pink peach blossoms highlight the 2019 Year of the Pig/Boar stamp from the U.S. Postal Service®, the 12th and final stamp in the Celebrating Lunar New Year series. The Year of the Pig/Boar begins February 5, 2019, and ends on January 24, 2020.

The Lunar New Year, a celebration that goes by different names across Asia — Chinese Chunjie, Vietnamese Tet, Korean Solnal and Tibetan Losar. It is the most important holiday of the year for many Asian communities around the world. On New Year’s Day and in the days that follow, parades featuring enormous and vibrantly painted -mâché dragons, parties, and other special events are common. Vendors at outdoor markets sell flowers, toys, food, and other items for celebration. Peach blossoms, like those depicted in the stamp art, are of particular importance during this auspicious time of year. In China, peach trees typically bloom in early February, just in time for the new year. The striking pink blossoms mark the beginning of spring in Chinese culture.

Each year, the holiday, also known as the Lunar New Year, begins on the first new moon between Jan. 21 and Feb. 20. This year, that day fell on Tuesday, Feb. 5.

Lunar New Year is the only time many people make the long trek home to see their families, some traveling more than a thousand miles. Hundreds of millions of people are expected to migrate home during the holiday season.

Each new year is associated with one of the 12 animals in the Chinese zodiac: rat, ox, tiger, rabbit, dragon, snake, horse, goat, monkey, rooster, dog and pig. They’re also paired with one of five elements : wood, fire, earth and metal. This year will be represented by the Fire Rooster, the first in 60 years.

The USPS combining original artwork by Kam Mak with two elements from the previous series of Lunar New Year stamps – Clarence Lee’s intricate cut-paper design of a boar and the Chinese character for “boar,” drawn in grass-style calligraphy by Lau Bun – art director Ethel Kessler has created a culturally rich stamp design that celebrates the diversity of the American experience.

The Year of the Boar stamp is being issued as a Forever® stamp in self-adhesive souvenir sheets of 12. This Forever stamp will always be equal in value to the current First-Class Mail® one-ounce price.

Year of the Pig Stamps – Canada

Canada Post rings in the Lunar New Year with a two-stamp in its current 12-year series. In honour of the Year of the Pig, the stamps feature Zhu Bajie, or Pigsy, a character from the celebrated 16th century Chinese novel Journey to the West. Stamps designed by Albert Ng and Seung Jai Paek of Albert Ng and Associates.

Year of the Pig Stamps – France

France is commemorating the Chinese year of the pig with two sets of stamps that officially went on sale on Monday.

La Poste, the national postal service, has made 40,000 copies of a set known as “mountain”, which shows the animal walking on a mountain dressed in Chinese traditional clothing, and another 20,000 of a series called “lantern” which shows three pigs on a traditional red lantern.

The stamps were designed by the French Chinese artist Cheng Jiang Hong and are the latest in a series of special editions launched to coincide with lunar new year.

Year of the Pig Stamps – (UNPA)

The UN sheet, contains 10 $1.15 stamps and features the UN logo. It is the 10th release in UNPA’s Lunar New Year stamp series. The labels of the stamps and the background were designed by Wu Shining, a renowned Chinese artist who has designed many stamps for China Post.

Year of the Pig Stamps – China

Hongkong Post is releasing Year of the Pig mini-panes, which adopt the respective designs of the $2 and the $4.90 mint stamps in the “Year of the Pig” special stamp issue of 2019.

Year of the Pig Stamps – Korea

Year of the Rooster Stamps – Vietnam

Year of the Pig Stamps – Japan

Year of the Pig Stamps – Taiwan

Taiwan Post announce the theme of the new year stamp is “rich pigs,” and is designed to replicate “atmosphere of joy of New Year” by employing gold, plum, and red colors.

Year of the Pig Stamps – Singapore

The year 2019 marks the reign of the Pig and the twelfth animal in the Zodiac Series on the Chinese calendar. The warm-hearted, good-tempered and gentle Pig is depicted on this set of stamps.

Year of the Pig Stamps – Guyana

New Zealand Post has created a special stamp issue and medallion to commemorate this annual celebration.

Year of the Pig Stamps – Australia

Year of the Pig Stamps – Grenda

Year of the Pig Stamps – Guyana