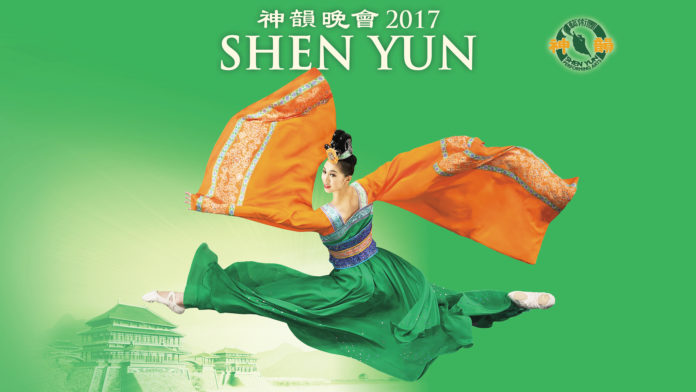 ORLANDO – A daughter disguises herself as a son and takes her father’s place at war. A magical monkey, an ogre, and a humanoid pig protect a Buddhist monk as he journeys to the western heavens on a quest for true teachings. A folk hero gets drunk, but then saves a village from a vicious tiger. And Buddha asks the deities in heaven to come down to China and walk among the people, creating a divinely inspired civilization.

China’s 5,000 years of uninterrupted history has yielded an endless treasure trove of legends, myths, and literary classics. These stories come to life in vivid detail through Shen Yun’s awe-inspiring performances. At the core of Shen Yun’s performance is classical Chinese dance with its explosive techniques, synchronized movements, and expressive powers. China’s numerous ethnic and folk dance styles round out the evening. Large animated backdrops and exquisitely crafted costumes transport audiences from the Himalayas to tropical lake-filled regions; from the legends of the culture’s creation over 5,000 years ago to contemporary tales of courage; from the highest heavens down to the dusty plateaus of the Middle Kingdom.

The entire performance is accompanied by the Shen Yun Orchestra, which combines two of the world’s greatest classical music traditions, Chinese and Western. Ancient instruments like the soul-stirring erhu and the delicate pipa lead the melody on top of a full Western orchestra, creating an enchanting new sound. CANNOT BE SEEN IN CHINA TODAY

For thousands of years, China was known as the Divine Land. But under 60 years of communist rule, authentic Chinese culture, including traditional arts, have been almost lost. That is why you cannot see a performance like Shen Yun in China today.

Based in New York, Shen Yun is entirely non-profit. Its artists have come from around the world to revive this glorious heritage. Since its establishment in 2006, the company has become a global sensation, performing for over a million audience members across five continents around the world.