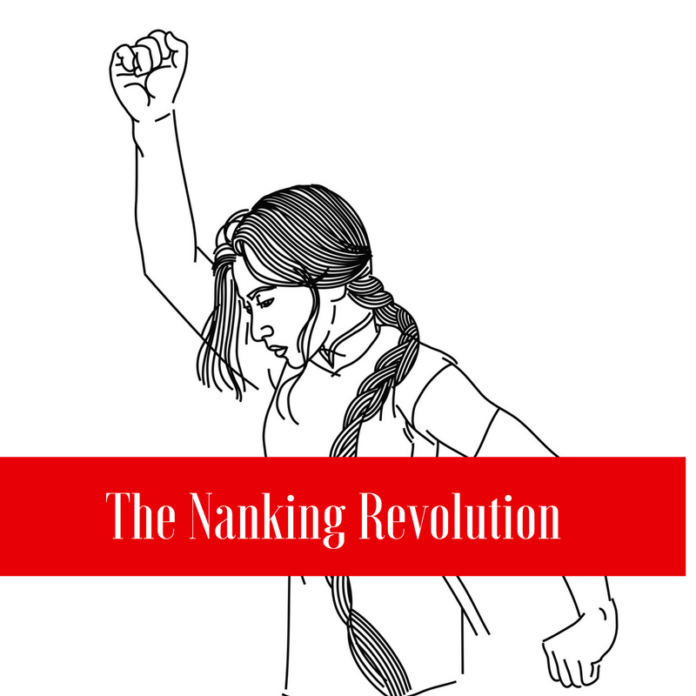 This is an excerpt from Brandon Chin’s novel, “The Nanking Revolution”. It is an alternative history of The Nanking Massacre where the Chinese civilians, instead, rise up against the Imperial Japanese Army. You can download the novel in its entirety here:

Neda felt a thick knot settle in his chest sitting frozen over. The cramped train full of other young men did him no better. Sweat and filth painted the air. Skirmishes broke out as people were jammed like daikon in storage. Soon the commotion rose to a crescendo and collapsed just as fast with the appearance of an officer.

He was fully clad in the military gear Neda often saw in the newspapers his father had brought home. Never before did he think that he would see them in the flesh. Out in Skikoku, the war seemed so far away. Completely detached.

“Attention!” the officer rang out.

Suddenly, the lanky bodies came to a halt. They formed a circle around the officer wide enough for him to take a few steps in any direction. The people towards the back felt themselves squeezed indefinitely against the metal frame of the train cart.

Neda found himself lucky standing in the innermost part of the clearing. His eyes took in every detail of the man’s behavior. There seemed to be an even more ruthless air to the officer than the two brutes at the hotel.

“You must save this energy for the fight ahead. You are now members of the Imperial Japanese Army. You are Children of the Emperor. You signed up as volunteers to support our efforts in China. Our valiant brothers have long taken Shanghai. You are now to assist them in the recently occupied Nanking.”

The cart erupted in murmurs. Neda could feel the knot slowly rise into his throat. It felt as if the ox that milled his fields had begun pulling at his neck. The tugging was incessant.

“You are no longer the children of your parents. You are Children of the Emperor. Makers of his destiny. You have volunteered to serve the Emperor and our country. And in reward, we will send your family a stipend as stipulated in the contract. We will take care of your living expenses on the field.”

“As Nanking has already been occupied, the hardest part is over.”

“Once we arrive at the Osaka airport, you will be outfitted with gear and given a brief session on the conditions of soldiers currently out in the field.”

The cart seemed to be stifled in shock.

The officer exited the circle crowning his self-importance and entered the next car. After the door slid shut, the circle remained.

Neda could hear crying. A few shouted out in agony. Most were drowned in utter despair.

Looking around the inner part of the circle, all Neda could see were boys. Kids. Children.

At twenty, he must have been the oldest. This was no volunteer operation – it was slavery.
Suddenly, he felt a presence. He turned to his head to the left to see a pair of determined eyes across the circle from him.

He must have been the same age. His plain white shirt and baggy pants reminded him of countryside simplicity. His disheveled hair looked as if he, too, had been suddenly removed from his own life.

Neda could sense the same type of helplessness in his eyes. Yet there was a determination that rippled inside of them. Something that screamed a sense of self-worth.

After some time, the lanky bodies in the midst of puberty settled down around the cart. They sat, awaiting their inevitable future.

Neda found himself standing near the exit door staring out the window. The landscape flew by enticing him to melt into its streams. Escape into the movement. Soon after, the boy with the eyes came by his side.

Neda blinked. “What do you mean?”

“This. The war. Japan fighting the world,” he said shifting his posture to face Neda. “We are participating in something huge.”

Neda titled his head. Of course this went against everything he believed in. The books from all over the world had rewired his brain. He didn’t think like the average Japanese. But he couldn’t let loose his opinions here.

It is already happening. There is nothing I can do.

“You’re right. It is something I could never have imagined back in Shikoku,” Neda responded.

“No way! I’m from the northern part of Shikoku. If I was there now, I would’ve avoided this mess.”

Neda raised his eyebrows. He knew there had been something about the boy that reminded him of home. “It’s rare to find someone from Shikoku all the way out in Osaka.”
The boy shifted his posture resting his weight on his right foot and leaned against the window.
“Yeah, I was out here to get medicine for my father. He has a disability. But while I was at the hospital, some guy looked like he was waiting for me at the counter. Next thing I knew, I’m being told that the paper I signed wasn’t for my dad’s medicine but a contract with the devil.”
Neda thought about this for a moment. He turned to take a look around the cart. Heads bounced as they hung staring at the floor as if looking for answers. Answers that would never come. The air was permeated with defeat. “It seems like they got us all,” Neda said quietly.

The boy shook his head. A silence fell over them for some time as they digested their thoughts and the reality that faced them overseas.

“I am Iwamoto by the way,” the boy said slightly bowing his head.

The silence renewed like a wave expanding further onto the shore.
***

Click the link below to get the novel for free: https://brandonchin.net/book/the-nanking-revolution