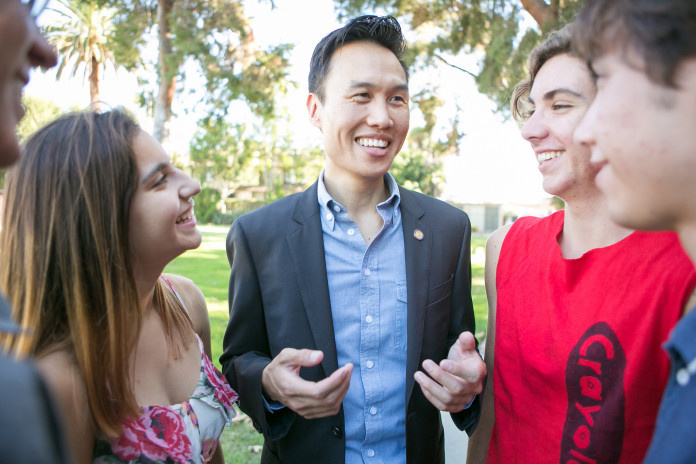 Bao Nguyen is the Mayor of the City of Garden Grove, California and is the first Vietnamese Democratic mayor in the United States and the first directly elected openly gay mayor in Orange County.

He is running to represent California’s 46th District in the House of Representatives of the U.S. Congress and is on the ballot for California’s Primary Election on June 7, 2016. “As a son of refugees who escaped a corrupt and oppressive government, I am grateful to my parents and I want to honor their sacrifices by fighting to make sure that as Americans we have a government that serves the interest of the people, not lobbyists and not the establishment,” Mayor Bao Nguyen said.

“I believe in people because I know that when we come together to create positive change in our communities, we can win,” he said.

“Too many generations in my family have had to survive war and I myself was born in a UN refugee camp, so as a member of the US Congress, I will stand for peace in our world. That informs everything I do today, from my current work fighting for middle class families in Orange County, to my decision to endorse Bernie Sanders,” he said.

“Bernie Sanders is the only candidate in the Presidential race who is making a strong case of being able to help hardworking, middle class families. He also represents everything I want to work toward in Congress: building a strong middle class, reducing income inequality, and expanding access to public education and healthcare, because every family deserves a chance for success.” “He’s demonstrated a lifelong commitment to taking on special interests and the one percent, and getting money out of politics, so everybody has a fair shot at the American Dream. Both of us understand that government should represent the many, not the money. We want to empower middle and working class families.”

“When my family arrived in America, we were refugees and we had nothing, not even citizenship status. But with what was once a strong public education system, I was given the opportunity to make something of myself, an opportunity I never would have seen had we stayed in Vietnam.  Senator Sanders and I want to breathe new life into public education, as well as other social programs like Medicare and Social Security, because every family deserves the ability to succeed and fulfill their own American Dream.” During his college years, Bao led a protest against Senator John McCain’s use of the racial slur “gook” during the Mccain’s 2008 election campaign season. As a community organizer for local churches, he helped to organize senior citizens in Garden Grove to establish a senior transportation program in the city.

In office as mayor, he’s increased transparency at City Hall, and supported programs that help small business, seniors, and kids. Working closely with both the Latino and Vietnamese American communities as mayor, he’s been endorsed by Judy Chu, Mark Takano, and many other progressive leaders.