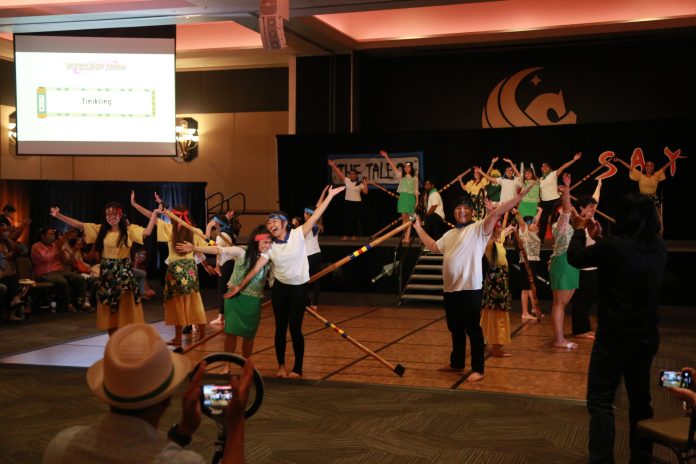 The Filipino Student Association held their annual cultural event called “Sayaw” located at UCF’s Pegasus Ballroom on March 20th. Sayaw showcased the various traditional dances within Filipino culture and a Filipino modern dance group called “Fresh Off the Beat.” The theme of this year, “Tale of Sayaw,” alludes to the famous Japanese Animated series “Naruto: Shippuden.” Throughout the event, the theme was emphasized through the storytelling of the Filipino Dance Troupe leaders, Lady Marasigan and Daniela Suansing. The story of the event follows the characters within the Japanese Animated series and underlines the importance of friendship in experiencing hardships and struggles which was highlighted in the dance performances. The Filipino traditional dances included Tinikling, Carinosa, Binasuan, Maglalatik, Karatong, and Bangko. Each performance featured the beautiful and elegant aspects of the Filipino culture through the bright colors of traditional clothing, graceful dancing, and sweet-sounding music. Sayaw also featured the Filipino modern group “Fresh Off the Beat” that won the Dance Talent Jam during the Fall semester at the University of Florida. Fresh Off the Beat presented their stylish and poppy dancing which was a delight to watch. Throughout the event, the audience were overjoyed and thrilled to see the amazing and wonderful performances. The finale of the event presented the Filipino Student Association officers performing the traditional dances which was then followed by all of the performers joining together at the middle of the stage.

The Filipino Student Association (FSA) at the University of Central Florida is a non-profit organization that promotes the Filipino culture throughout the UCF campus and throughout the community of central Florida. FSA promotes itself by holding meetings and by hosting and attending a variety of events such as: Open Mic Knight, Def Talent Jam, Field Day, Sayaw, and Formal. We hope to reach out to the diversified community at the University of Central Florida and to encourage all students and faculty to attend our meetings and various events, as we stay committed to our slogan, “Your Home Away From Home.”