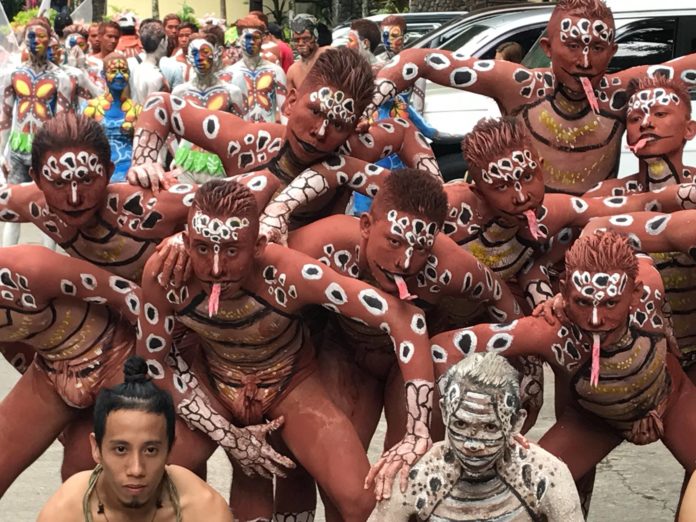 In June of this year, I went back to the Philippines for a seven weeks’ vacation with no plans and schedule except relax and enjoy my Manila that I missed so much. I also had an invitation from my best friend Romy Go to stay in his condominium at the very exclusive area in Makati called The Lofts at Rockwell. Little did I know that many of our friends still remembered us. Before we knew it, we were receiving invitations for lunch, dinner, and sometimes even breakfast. We were also lucky to have been invited to watch different local plays and Broadway productions, ballet rehearsals, judged the preliminaries of the Miss Philippines Earth beauty pageant, judged a gay parade, not to mention endless reunions with friends and past members of the dance, theater, and fashion companies I used to perform.

But one of the most memorable experience we had was when we were invited to fly to another island outside of Manila, to the island of Negros with its capital Bacolod City of Negros Occidental. The invitation came from one of my former dance colleagues Nitz Mora from the Salinggawi Dance Troup of the University of Santo Thomas which is also where I graduated college with a degree of Bachelor in Fine Arts Major in Advertising. Nitz asked us if we were interested to be judges of the annual “Mudpack Festival” which was to take place in a resort outside Bacolod City. They would take care of our food and accommodations for five days and even get paid as judges. We only had to pay our own airfare. Of course, with no hesitation, we both said absolutely “Yes!” not knowing at all what in the world was a “mudpack festival” all about!

Upon arrival in Bacolod, we were met by a very nice gentleman by the name of Rudy Reveche whom I found later was one of the original organizers of the festival and a very well-known personality in Bacolod. Rudy then explained to us that the driver was now taking us to an hour and half drive outside the city to a mountain resort called “Mambukal” which means “boiling place” located near an active volcano known for its natural hot springs. He also explained to us that this is where we will be staying for the whole weekend to witness and judge the now famous Mudpack Festival.

Upon arrival at the resort, Romy and I were so impressed on how the resort was located. The whole area was like being in a wild jungle with cascading waters falls, bird sounds, hot springs, guests’ bungalows sprawled all over the property, some hidden in lush greenery and trees. We also noticed people young and old, arriving and checking in for the weekend. There was even a camp site where students were building their tents, as well as a very nice Mambukal Resort Spa complete with massage, facial, and mudpack treatment. We noticed a lot of preparations and rehearsals going on which amused me and Romy to no extent. This was exciting for us specially not knowing what they were rehearsing for. At dinner, we were introduced by Rudy to Miss Ellen Jalandoni, a very charming and lovely lady who was the manager of the resort, whose last name is also very powerful and well known in the region. After dinner, we retired to our bungalows and hit the sack.

The next day, woke up early and had breakfast. We were ready to witness for the very first time, the Mudpack Festival that everybody has been talking about.

The roots and origin of the Mambukal Resort’s Mud Pack Festival started way back in 1986 right after the EDSA PEOPLE’S POWER revolution in Manila which overthrew the late president Ferdinand Marcos. A group of theater artists named, “Kabataang Boldabilista ng Negros” (Young Vaudaville’s of Negros) spent their summer vacation in Mambukal. The group was composed of Louie Dormido, Rudy Reveche, Milton Dionson, and Gerry Mangoliman, found out the multi-colored volcanic clay in the resort being made into toys by the resident children. Soon, the group made artistic, miniature decorative jars out of the mud clay which were bought by visitors of the resort. The four artists also found out one evening in their drunken banters, that the clay is also good as a facial and body mask especially when you fall flat on the ground with face first, thus evolved the title “Mudpack Festival.” Year after year, artists came from all over to part of the festival, compete and make their beautiful creations, paintings, and direct artistic productions. Today, the festival is participated by students from different schools and universities in the island and also adults and private individuals who wants to show off their artistic talents.

The festival is managed by the resort headed by Miss Jalandoni. While Rudy Reveche and Louie Dormido are the festival’s artistic consultants. Louie, as a tradition, even opens the festival every year with a fascinating ritual dance while Rudy takes charge of briefing the judges who and how to judge the different categories in the next two days of the festival as well as overlooking at the whole event.

The regular and perennial winner in the group “tribal” dance competition are from the Poseidon Dance Theater who are students of the Visayan Maritime Academy (VMA) Global College of Bacolod City while the adults and children drumbeaters are from La Carlota City, famous for their “sambita beat” drumbeaters as well as the Sexy Samba dancers, are the perennials winners in the drumbeating competition. The festival is held every 3rd weekend of June as part of the National Environmental Month in the Philippines and of the Negros Occidental Provincial Environmental Week.  San Miguel Corporation, makers of San Miguel beer, is one of the major sponsors of the festival. It sponsors the Tribal Dance Party on Saturday night with four live bands sometimes even from Manila. Other events during the festival are poster-making contest for kids, installation and performance art, mixed media art competition, clay body painting and solo dance competitions, as well as a photo competition a week after the event. The festival is now popular for visiting tourists and artist as well as professional and amateur photographers from all over the Philippines, Asia, and around the world. Though there are hundreds of exciting and beautiful festivals in the Philippines all over the 7, 107 islands, I found the Mudpack Festival as one of the most unique eco-friendly and most colorful of all festivals. It is a must to be at the Mambukal Resort on the 3rd weekend of June every year. You will agree when you see these outstanding photos taken by Ronnie J. Baldonado of the festival last June 2017.

To learn more about the festival, go to mambukalresort.negros-occ.gov.ph/
Or Google: mudpack festival