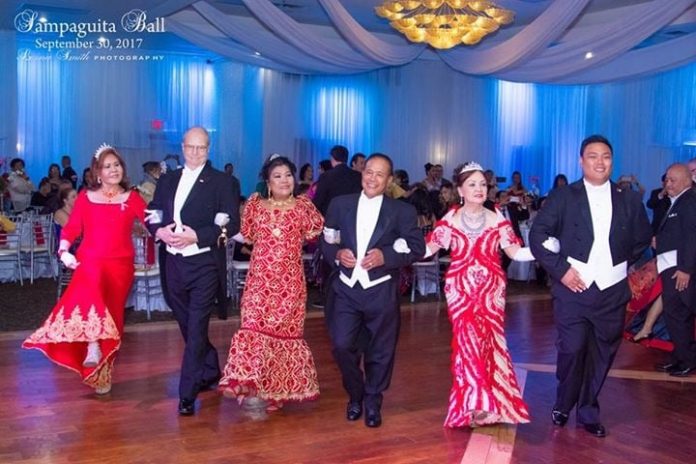 Since 1991, the Philippine Cultural Foundation, Inc. held it’s annual grand “SAMPAGUITA CHARITY BALL” at their magnificent Bayanihan Arts & Events Center in Tampa, Florida. The $125 per person event has made it a point to present the grand “Rigodon de Honor,” a tradition in the Philippines performed during town fiestas and at the Malacanang Presidential Palace for visiting dignitaries. In was in the 15th Century, when the Philippines was under Spanish occupation, a group of high elite Spaniards introduced a dance from Spain called “Riggodon de Honor” which means “the regal parade of honorable.” It is believed that this dance is Spain’s version of the French Minuet.

The dance was normally presented as a formal opening of a state visit or a special event when the state officials and the elite as well as the super-rich was presented to the guest of honor. Later, the dance became a tradition in almost every city and town in the Philippines. Today, it is believed that there are almost 200 versions of the Riggodon. The dance can be seen in almost every grand night of every town Fiesta where the ladies, as well as the men, wear the “best of the best” in Philippine gowns and Barong Tagalogs, designed by the Philippines best couturiers. In Tampa, Florida, the Philippine community looks forward to attending this grand ball wearing their best Philippine “ternos” and Barong Tagalogs made by different designers. Here now are some photos through the years of how the Filipinos in Tampa Bay, Florida continue to present and preserve the tradition “Riggodon de Honor” year after year.