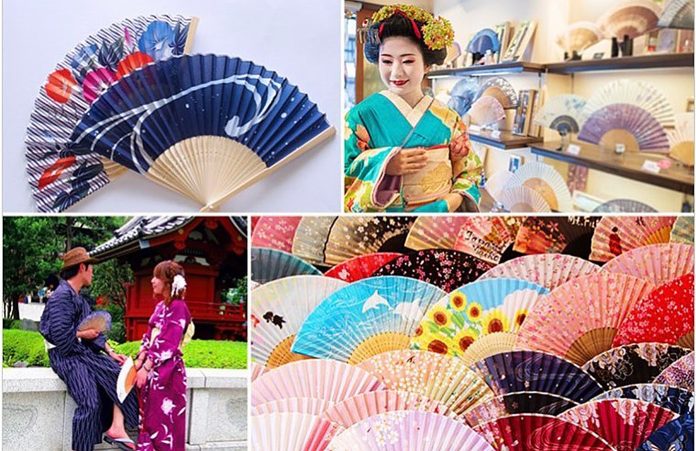 While in Florida one might seek relief from the summer heat by running into an air conditioned building, in Japan, fans “sensu” still keep much the same importance and function as in previous times. Though there are several kinds of fans, one type is the “sensu” or folding fan. The sensu is a foldable fan made of paper affixed to thin bamboo sticks. The sticks are set one on the other and the paper is folded accordingly. The sticks set to paper are then joined by a rivet point which holds the fan together and allows it to fold and unfold easily. Appearing between the 6th and 9th century AD, “Sensu” are still a common and relatively affordable summer tool to keep away the heat. Their ease of use and carry make them a great accessory for a festival visit or even just enjoying a warm day outside.

First originating in the early years of the Heian period (794 – 1185 AD), Japanese folding fans have played an important role in Far Eastern society for centuries. Sensu, as they are natively known, were traditionally used during ceremonies, ancient rituals and for decorational purposes. Folding fans are still very popular in Japan today, although they are now primarily used to fan oneself in hot and humid weather.

Japanese fans are usually made from paper or cloth on a collapsible bamboo frame. Many designs are adorned with decorative motifs such as floral designs or geometric patterns. The angle the fan is opened to varies between 90 and 180 degrees, with around 120 degrees being the norm. The shape of the unfolded fan broadens towards the ends, a shape known in Japanese as “Sue-hirogari”.