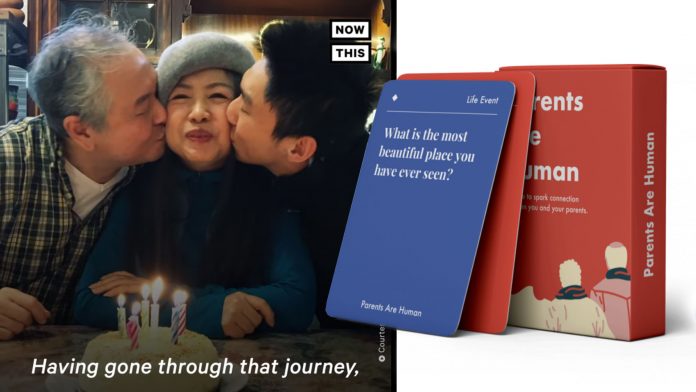 Joseph Lam’s story is powerful and the organic growth of his company “Parents Are Human” is a testament to an almost universal experience for second generation Asian Americans. The divide between first generation immigrant parents and everything that comes with their tenacious efforts to help their children succeed has created a subculture that is a common experience for Orange County, San Gabriel Valley, the Bay Area and every Asian enclave in the country.

This experience would include the world of helicopter moms, stoic dads and an obsession with grades and getting into college that would put Stage Moms to shame. But with this laser-like focus on success, there is a dark side to the strained relationships between parents and children, with a backdrop of conflicting cultures and expectations. Joseph Lam did not speak to his parents for years and it wasn’t until he hit rock bottom that he realized the value of a relationship with his parents.

Beyond the cultural differences of individuality versus collectivism, there is the generational difference of a world that is nothing like the world our first generation parents grew up with. From language barriers to cultural quirks, Joseph chose instead to shut his parents out to fit in to a world he needed to survive in. Not making excuses, but many Asian Americans have done this. Joseph woke up and now wants to be part of the solution.

What I love the most about what Joseph Lam is doing, is the fact that he is action-oriented. He learned from his mistakes and is now seeking to make the world a better place by sharing his invention: a card game, which is a series of questions, that organically mirrors the depth of natural conversations, and essentially gamifying tough conversations. Nothing is more Asian American than gamification. But nothing is less Asian than having gritty, real, emotional conversations beyond the surface level.

But it starts at that surface level. A surface level question on one of the cards would be “what’s your favorite food?” Joseph thought that this was a great experience to understand his mother’s need for feeding people, not only her children but neighbors and friends. It came from a period in her own childhood where she experienced poverty, hunger and did not have any food for long periods.  This was her love language and Joseph learned that, and to adjust.

A deeper question on one of the cards would be “what is the one bad trait you have that you could change?” I really pressed Joseph on this one, because while I loved this question, I could feel the extreme discomfort had I brought this to my own parents, if I had the opportunity. My parents had to create a veneer of omnipotence and strength that created a barrier and prevented them from truly asking for help in a way that was humble.

Even when I knew their gambling problems had caught up to them, there was a sense of “help me this once and I”ll be fine” but it never stopped, and the distance I created with them eventually ended with the ultimate distance. Soon, my father’s death in 2018 and my mother’s neurological deterioration prevented me from having those conversations. The years prior, I was so busy showing my own love to my father, in my own love language, by going into to a corporate world I avoided my entire 20’s and an Ivy League school to fulfill my dad’s dream, not mine. To me, that was one type of love language, but there’s more complexity to that because I did not make the time to have conversations to show that was what I was doing. I can only hope he understood what I was doing.

Once that dream of graduating from an Ivy was achieved, we all realized that we are hungering for that true connection that is stilted in Asian families. True conversations are the bridge to building bonds and the distance created by my nonstop work schedules had its consequences.

We had other barriers though. Humility and lowering their standard of living from the affluent corporate 80’s and 90’s was never in the books, especially for Asian families where “face” is a priority, and that pride and “saving face” trumped any rational decisions to create a sustainable life.  I wonder if we played Joseph’s game, would that have changed their trajectory?  Or if they would even be too stubborn to play this tough game. My family needed something transformational.

Everything starts with a conversation but it must come with a desire to connect and learn. “Parents Are Human” is a great solution and helps alleviate the problem, but I am most amazed that this is one of the first times that anyone has verbalized this common dynamic in Asian Americans so Joseph impressed me greatly by being a trailblazer in even having this specific conversation.

Fixing family dynamics is the bottom line of life for everyone. Many of us spend our lives running away from our family problems, but they will always rear their heads, whether it’s in spousal relationships or friendships down the line. Joseph’s product helps us take that one step closer to creating love and peace, in a way that shallow epithets never will. Not to be dramatic or hyperbolic, but this could change the world.

The interactive experience will bring these tough conversations up and with people fixing these issues, it can be a building block for real societal change. While my story didn’t quite have a picture perfect ending, my dad and I had enough conversations to fix things, agree to disagree and I know that my conversation 5 days before he died, he told me how proud of me he was and that was a perfect book end, with minimal words. My last words were to him after he said “Don’t text and drive. It’s dangerous” was a smartass “Only if you don’t know how”. But it signified the agreement to disagree, and the peace and love we had for each other. I can’t help but to think, “how cool it would be to play that game with my dad”. Right now, the only thing I can do is to take the wisdom Jason and his card game have shared with me to improve my other current familial relationships.

You can find Joseph’s tools on parentsarehuman.com and “Parentsarehuman” on Facebook, Twitter, Instagram and the social media networks.  This first step could bridge the generations and the uniquely Asian American focus is more needed than ever. I missed the opportunity to do this with my parents. I hope you readers out there don’t.