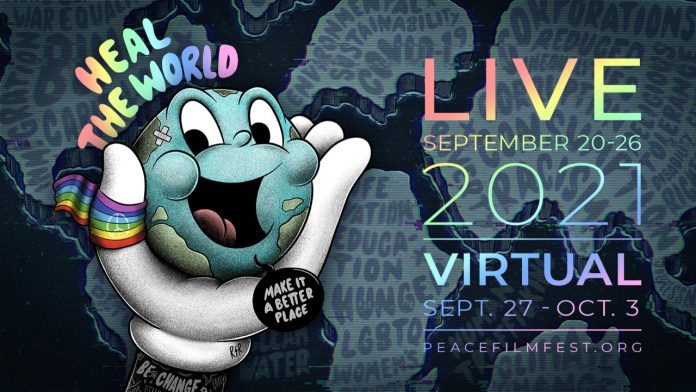 Following a successful pivot in 2020 to both safely distanced in-person events combined with virtual online feature and short films to be enjoyed from the comfort of home, the 19th annual Global Peace Film Festival (GPFF) returns this year with a similar hybrid format to deliver a robust program that includes thought-provoking films and art exhibits for people all over the world.

Starting on the International Day of Peace, Tuesday, Sept. 21, 2021, running through Sunday, Sept. 26, 2021, a selection of feature and short films will be presented in person at locations in Winter Park and Orlando. These films highlight themes such as civil rights, environmental justice, ethics, human rights, immigration, LGBTQ+, music, social justice, voting, wellness and wildlife.

In years past, this unique festival has brought filmmakers and filmgoers from all walks of life to Central Florida, inspiring them to take action in their daily lives and to leave the world a more peaceful place than they found it. GPFF continues this tradition with a full in-person program as well as virtually through online feature, documentary and short film screenings, panel discussions and art exhibits.

As last year, there will be both a ticketed and a free way to watch the virtual films that will be available from Monday, Sept. 27 through Sunday, Oct. 3. Both ticketed and free films will be accessible at the GPFF website – as will the filmmaker interviews and information about the in-person events. Both passes and individual film tickets are now on sale at GPFF. Tickets for in-person films at the Winter Park Pubic Library are $10 each. Patrons may purchase a $125 Festival Pass that provides access to all films in person and an additional five films on the virtual platform during the availability window (certain geographic restrictions apply) as well as other ticket and pass options.

The Festival’s opening night film to be screened at Enzian Theater on Tuesday, September 21 is Mission: Joy – Finding Happiness in Troubled Times (USA, 2021, 90 mins). Describing themselves as “mischievous brothers,” His Holiness the Dalai Lama and Archbishop Demond Tutu give a master class in how to create joy in a world that was never easy for them. Consisting largely of never-before-seen footage shot over five days at the Dalai Lama’s residence in Dharamsala, India, the film invites viewers to
join these luminaries behind the scenes as they recount stories from their lives. Directed by Academy Award ®-winning director Louie Psihoyos with co-director Peggy Callahan.

The Festival’s opening night film to be screened at Enzian Theater on Tuesday, September 21 is Mission: Joy – Finding Happiness in Troubled Times (USA, 2021, 90 mins). Describing themselves as “mischievous brothers,” His Holiness the Dalai Lama and Archbishop Demond Tutu give a master class in how to create joy in a world that was never easy for them. Consisting largely of never-before-seen footage shot over five days at the Dalai Lama’s residence in Dharamsala, India, the film invites viewers to join these luminaries behind the scenes as they recount stories from their lives. Directed by Academy Award ®-winning director Louie Psihoyos with co-director Peggy Callahan.

Academy Award®-winning director Louie Psihoyos teams up with co-director Peggy Callahan on MISSION: JOY – FINDING HAPPINESS IN TROUBLED TIMES, a documentary with unprecedented access to the unlikely friendship of two international icons who transcend religion: His Holiness the Dalai Lama & Archbishop Tutu. In their final joint mission, these self-described mischievous brothers give a master class in how to create joy in a world that was never easy for them. They offer neuroscience-backed wisdom to help each of us live with more joy, despite circumstances.

Inspired by New York Times bestseller The Book of Joy: Lasting Happiness in a Changing World, the film showcases the exchange between these two Nobel Peace Prize winners that led to that book. Consisting largely of never-before-seen footage shot over 5 days at the Dalai Lama’s residence in Dharamsala, the film invites viewers to join these luminaries behind the scenes as they recount stories from their lives, each having lived through periods of incredible difficulty and strife. With genuine affection, mutual respect and a healthy dose of teasing, these unlikely friends impart lessons gleaned from lived experience, ancient traditions, and the latest cutting-edge science regarding how to live with joy in the face of all of life’s challenges from the extraordinary to the mundane. MISSION: JOY is an antidote for the times.

From Director Michelle Hung – A young American Born Chinese explores her cultural heritage and reflects on her identity.

“Atomic Cover-up” is the first documentary to explore the bombings of Hiroshima and Nagasaki in 1945 from the unique perspective, words, and startling images of the brave cameramen and directors who risked their lives filming in the irradiated aftermath.

It reveals how this historic footage, created by a Japanese newsreel crew and then an elite U.S. Army team (who shot the only color reels), was seized, classified top secret, and then buried by American officials for decades to hide the full human costs of the bombings as a costly nuclear arms race raged. All the while, the producers of the footage made heroic efforts to find and expose their shocking film, to reveal truths of the atomic bombings that might halt nuclear proliferation. “Atomic Cover-up” represents, at least in part, the film they were not allowed to make, as well as a tribute to documentarians everywhere.

It is based entirely on the first-hand accounts of key members of the film crews (from the man who shot an early Akira Kurosawa movie to a pioneering American TV director) and the first vivid 4K transfers of their footage–much of it appearing in a U.S. documentary for the first time–as well as long-hidden official records which document the suppression. These rich, vital materials are carefully assembled for haunting effect and maximum relevance for today as nuclear dangers reach peak intensity and official “cover-ups” expand. Charlie Seaborn contributed an original score and Alex Gibney and Alex Winter served as chief advisers. (51:26 U.S. 2020)

Vimal Kumar is the son of a sweeper, or “untouchable” in India’s cruel caste system. This film profiles his efforts to provide different options and more hope for other children of sweepers through education. The film follows him around India as he manages his “Movement for Scavenger Community” and observe his challenges… and his success.

‘Gandhi Rediscovered’ is an insightful account of the formation of Gandhian philosophy and its relevance to contemporary times. It gives a glimpses into the childhood of Gandhi and his journey into becoming a Mahatama. Gandhi was no extra ordinary child. He had the flaws of any common person. But it was his great strength of character that transformed him.

The film also discusses the impact of Gandhian philosophy on education and politics, and how it influenced political leaders (Martin Luther King, Nelson Mandela) and movements across the world. The film looks at Gandhian philosophy or methods not just as a political tool but as a way of living a holistic life. Gandhi was the change that he wanted to see.

Some key points for the film better understanding

Gandhi as a child was disturbed by the fact that he cannot touch the person who comes to clean his house. That is because in Indian caste system people at the bottom Dalits are considered untouchable. The discrimination is similar to racial discrimination. Also In 1936, Gandhi established his home in Whardha Maharashtra. He called it Sevagram. It at Sevagram that he established the education system Nai Talim.

The key person in the film includes Sudharshan Iyengar who is a foremost Gandhi scholar in India. He has published many research articles and books.

Dr Abhay bang did his studies at Nai Talim Sevagram. He was a young kid when When Vinoda Bhave a Gandhian started the Bhudan movement in 1950s in India asking people to donate land to the poor

Tushar Gandhi is the great-grandson of Mahatama Gandhi and an eminent scholar on Gandhi.

Ali lives in a world where being educated has no significance. His friends work as laborers and feed their stomachs. They look up to Mohan who is uneducated and well off and wears fancy clothes, fancy watch and spits all over. Everyone wants to be like Mohan- and going to school is considered futile and outright ridiculous.

But Ali has to go to school. He has to walk for miles and reach his school because his uneducated father insists he get educated- this, despite the fact that getting a meal a day is a struggle for the family.

Ali has no value for school. He would rather work and get bread for his family. Mohan too makes fun of his poverty. One day Ali refuses to go to school. His father lovingly tells him about his dreams for Ali and about Vivekananda the great. That day deepens his understanding of life and education.

It is when you transform from within is when the world transforms from without; Now Ali is intent upon transforming the life of his village by educating them- by making a school outside his hut.

But are the villagers ready for this transformation?

Why do they need a school?

The film also questions the need for education and its power to enable us to choose a significant life.

A touching and hopeful film about a medevac helicopter pilot who found peace within himself and with his mortal enemies when he tries to build a peace garden at the Khe Sanh Combat Base where he stationed during the Viet Nam war.

Learn how child refugees keep their culture after China took their country.

The kids at Tibetan Children’s Village tell the story of the occupation of Tibet and show how their school teaches the wisdom of their culture and helps them work towards returning to their homeland.

An intimate and visually stunning portrait of the lives, history and beliefs of the young refugees at Tibetan Children’s Village in the Indian Himalayas.

About the Global Peace Film Festival

The Global Peace Film Festival, established in 2003, uses the power of the moving image to further the cause of peace on earth. From the outset, the GPFF envisioned “peace” not as the absence of conflict but as a framework for channeling, processing and resolving conflict through respectful and non-violent means. People of good faith have real differences that deserve to be discussed, debated and contested. GPFF works to connect expression – artistic, political, social and personal – to positive, respectful vehicles for action and change. The festival program is carefully curated to create a place for open dialogue, using the films as catalysts for change. Visit peacefilmfest.org for more information. Follow @peacefilmfest on Facebook, Instagram, Twitter and YouTube