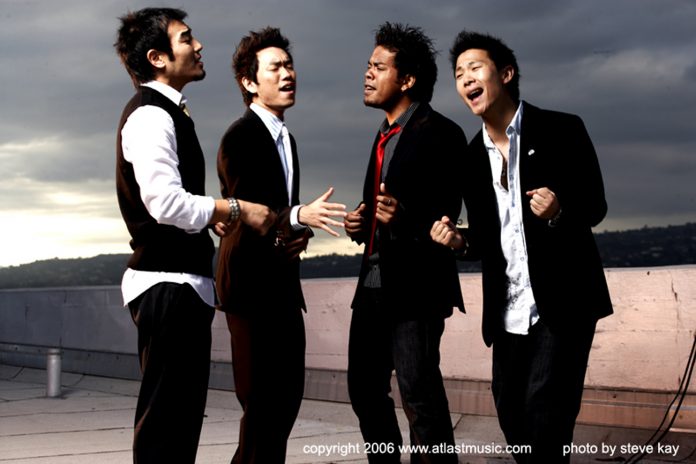 AT LAST has been breaking down barriers into the mainstream with their new old school style called ‘hiphopapella’, mixing tight R&B harmonies with hip hop beats. Influenced by the sounds of classic icons such as Stevie Wonder, Al Green, The Temptations and modern-day artists Boyz II Men and Alicia Keys, they write, produce and arrange their own music.

Based out of Los Angeles, CA, it was the love of music and singing that brought the four of them together along with the help and vision of actress, Ming-Na (ER, Joy Luck Club) and producer Eric Zee. They represent the many diverse cultures of Asian-Americans, including Chinese, Korean and Cambodian and all are very proud of their Asian-American heritage. They are also all bi-lingual.

AT LAST has appeared in concerts with Justin Timberlake, Destiny’s Child and Boyz II Men, and have performed on such noted shows as “It’s Showtime at the Apollo”, Ed McMahon’s “Next Big Star” and “The Wayne Brady Show,” but most people would know them from their competition on NBC’s “America’s Got Talent.”

Asia Trend Magazine correspondent Cuong Thiet Le got a hold of AT LAST for an exclusive interview, believe it or not, through MySpace.com, here’s what went down.

Cuong: First of all, why the name AT LAST?

Cuong: How did you all meet and what inspired you guys to form At Last?

AT LAST: Hans and Mike had been singing together since high school, and they decided to move to LA to find others who share their passion. We met at an audition and we really hit it off. We realized we shared a lot of the same musical influences and had similar professional aspirations, and with the help of Ming-Na, formed At Last. DJ recently joined after someone dropped out.

Cuong: I noticed that on your first full-length album, Slow It Down, that there are only three members, but on America’s Got Talent there were four members, how did DJ Say come to join the band?

AT LAST: We actually had four guys before the album dropped. When one of the guys left, we had just finished recording everything and decided to release it with just the three of us. However, for our live sets, we simply couldn’t do without the fourth voice. We held a nationwide search and DJ fit exactly what we were looking for. He jumped right in and a month later we were on NBC singing for primetime America!

Cuong: Are there any Asians artists that you look up to?

AT LAST: Of course. Hong Kong’s Jackie Cheung is a legend and an amazing vocalist. Solid from Korea are pioneers in their own right, bringing R&B to Korea and the rest of Asia. In fact we’ve done covers of both of these artists at our shows.

Cuong: How do you feel about Asian musicians moving to debut in the States?

AT LAST: We think it’s awesome. Asian music is becoming more and more global, and if Latin Countries can successfully export the Ricky Martins and the Shakiras, we don’t see why a Rain or a Boa can’t be successful here too.

Cuong: How did Ming-Na come to be your Executive Producer?

AT LAST: Ming-Na got involved right from the beginning. She shared our vision of getting more exposure for AA artists and felt she could really help, especially with the knowledge and experience she had gained already as one of the most successful AA actresses in entertainment.

Cuong: What would you say would be your first big break as a group?

AT LAST: The thing about this industry is there really is no single big break, at least from our experiences. It’s a bunch of little stepping stones that slowly get you to where you want to be. Winning KIIS FM’s best-unsigned band contest was great, and we got to perform at Jingle Ball with Justin Timberlake and Destiny’s Child as a result. So was being on the Steve Harvey Show or Apollo, or Nickelodean’s Drake and Josh. You could say being finalists on America’s Got Talent was our big break, but a lot of steps came before that, and we will continue to make moves afterward. If there’s anything we’ve learned the past few years, it’s that success doesn’t happen overnight.

Cuong: Can you each tell me a little about your backgrounds in music?

AT LAST: We’ve all been exposed to music from a young age. Hans and Mike sang in church choirs and praise teams at our neighborhood church. We later formed our own singing groups in high school with a few friends. Justin started taking violin and piano lessons since elementary school and went on to graduate from USC with a degree in music recording. DJ began honing his vocal skills by joining his high school choir, and later formed a vocal group in high school with some friends as well.

Cuong: In the future, how do you think Asian-American artists in the mainstream music media will affect the business?

AT LAST: We think American music markets will become more globalized. The appeal of Asian American artists is the potential to reach huge untapped markets in Asia as well. We’re surprised the American record labels haven’t realized that yet.

Cuong: And fi nally for our female readers, are any of you guys single?

AT LAST: None of us are married, if that’s what you mean. The only thing we’re married to right now is our music…

TAMPA CHOIR CONDUCTOR TO BE HONORED AT THE CHICAGO FILIPINO ASIAN AMERICAN “HALL OF FAME 2019.”