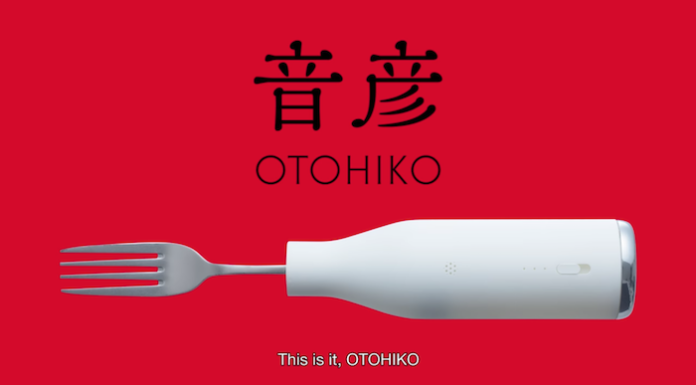 ●Otohiko mechanism
The moment that the high powered directional mic equipped on the fork detects the sound of noodles slurping, it transmits that signal to a dedicated app installed on a smartphone, using short wave radio communication. Sound is then emitted from the smartphone to camouflage the noodle slurping noise.

●Elaborated Camouflaging sounds for Otohiko
Nissin collected a huge amount of noodle sipping noise and extracted the “characteristic points of noodle sipping sound” by data mining of the sample sound. By doing so, we succeeded in developing “camouflage sound” to eliminate unpleasant sounds. You can listen the sound with the promotional video( https://store.nissin.com/jp/special/productx/otohiko/ ). Production was supervised by Shinya Kiyokawa, (his famous works such as “Yu-enchi”, “Shinfuro” and “Mori no Mokkin” ) the genius known for weaving tunes from the sounds of nature.

It will be sold in Japan only. ●What is Product X?
A project to develop products from the approach of solving “various food related issues” from a characteristically Nissin Foods perspective, linked to promotions commemorating the 1 year anniversary of the reopening of the Nissin Foods Group online store. Otohiko was developed as the first of these products.
It is a promotion project commemorating the 1st anniversary of Nissin Food Group’s online store(http://store.nissin.com). We will develop products from the viewpoint of solving “various food related issues”. “Otohiko” is the first produt borned by this project.