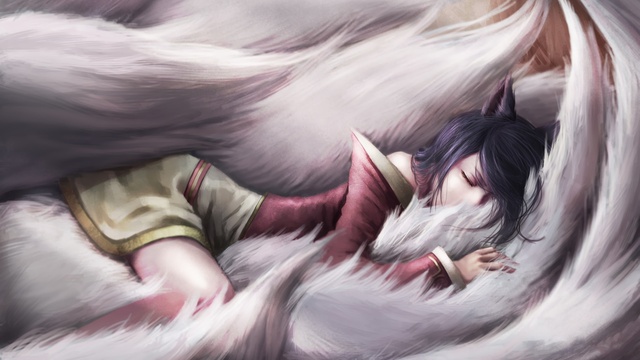 “There is great magic in words. Words have power that can give life and that can take life. Words have the power to change your destiny.”

A note: Young ladies, your life can change as in a dream after reading this tale…

An ancient story from ‘the middle kingdom’ tells of a young lady, whom one day went for a walk in a field and fell asleep under the shade of a big tree.

In her dream, appeared a Nine Tailed Fox, white as snow, coming down from the mountains, walking toward her.

Then, as it got closer, it looked deep in her eyes.

In its eyes see saw a great battle that happened in the same field many years before.

She followed him to a place in that vast open field, where the Nine Tailed Fox stopped.

There she sat down, put her arms around him and put her ear close to its heart. She could see the battle again; men fighting everywhere.

It was then; a spirit of a man appeared before her and something deep in her triggered, reaching out to the man in a way she couldn’t understand.

Standing face to face, the man soul’s and life essence poured into her carried on invisible strands of magic. A sensation that was intoxicating and overwhelming.

In the next eight days the Nine Tailed Fox stopped in different parts of the field where there was a battle, and every time she took over a soul of a man a sense of regret began inside her and ate her soul.

“There are only nine types of soul and nine ways in which the One becomes the many”, said the Nine Tailed Fox before it disappeared.

As her dream faded, she was delighted to discover that she had changed; but as we know, a magic spell can turn into a curse if we don’t use it right and we might get lost in the battle and never know peace.

It was now that she could get any man with her seductive charm, wondering the land, capturing men’s souls until this very day.

Is this how you want your life to end?

Another version to the story tells that before it disappeared, the Nine Tailed Fox added, that she had nine days to choose a man, or else; it was on the eighth day that the young lady met a man whom saved her soul, telling her, “No matter what the role of the soul’s essence, the essence itself is composed wholly of love,” and it is said that the two lovers disappeared together and were never seen again.

Last remark: Tonight and soon enough, the Nine Tailed Fox will visit you in your dreams, once this happens you have nine days to find a man. Hold on to him, he is your man. Otherwise, the spell will fade and disappear.

There are various versions to the story of the Nine Tailed Fox and there is truth and magic in all of them. The moral as I see it is that your soul is your innermost being, your higher self, who you really are, and that one must learn to connect to its soul and protect it. Find the most authentic and positive expression of your soul, the true self, which is a source of love, truth, freedom, and of self fulfillment.

Anything a man or a woman wishes to get is achievable with the right tool. Not only in the material world, but also in the mental world, certain knowledge serves as precise tools for higher knowledge, but beware, as just as in materialism, it is enough in a small crack to damage the whole tool and to spoil it, same is in spiritualism, the same crack can turn the tool to be meaningless and sometimes totally completely deadly and serve the opposite goal it was made for. There are many examples, as many believe, mostly young, that living the moment is the real essence of life. I will do you a favor and show you that an additional of one word is enough to make the different between the perfect pleasure and a momentary pleasure – Respect!

Live the moment – with respect! Respect, toward yourselves and toward others; during life we gain rights or debts, regrets or satisfaction. You must know to combine between life for the satisfaction only and the thought of tomorrow, “time to live and time to die, time to invest and time to immerse”. As it is said, ‘think on the end result before you begin’, a saying that you can look at from afar and from near and discover new faces each time you look at.