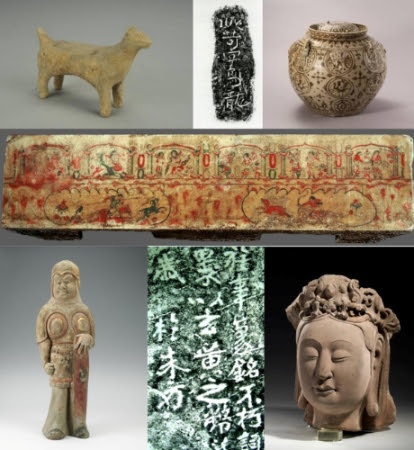 New York City – Art in a Time of Chaos: Masterworks from Six Dynasties China, 3rd – 6th Centuries, the inaugural exhibition at China Institute Gallery’s new space at 100 Washington Street in lower Manhattan, will be on view from September 30, 2016, through March 19, 2017. The exhibition is the first major survey to examine Chinese culture and its international influences during the Six Dynasties period, as well as the relationship between the two dominant political centers in the North and South. Art in a Time of Chaos presents more than 100 ceramics, sculpture, calligraphy, and paintings from the 3rd through 6th centuries, many only recently unearthed. Most of the artworks are on public view for the first time in the U.S., and a number have not been exhibited in China. The landmark show is organized by China Institute Gallery, the only organization in the U.S. dedicated to showing Chinese art from all periods, and the Nanjing Museum in China.

Art in a Time of Chaos is currently on view at its first venue, the Honolulu Museum of Art, from April 28 through August 21, 2016. The exhibition is accompanied by a fully illustrated 472-page bilingual catalogue.

The Six Dynasties, from the 3rd to 6th centuries, was one of the most dynamic periods in Chinese art history, akin to the European Renaissance in the impact it had on artistic creativity. Over the past 20 years, archaeological excavations have unearthed extraordinary works of art, forever altering scholarly understanding of this chaotic nearly 400-year period of political upheaval, geographical division, and civil strife. Not only was the Six Dynasties period a pivotal link in the historical timeline between the Han and Tang dynasties, but it is increasingly recognized for having laid the foundation for Chinese artistic standards, genres, subjects, and important themes that continue to define Chinese art today.

“Recent excavations in China due to an unprecedented building boom have been an amazing gift to the archeological community, adding greatly to our knowledge of ceramics, sculpture, painting, and calligraphy during the Six Dynasties period,” notes Willow Weilan Hai, Director, China Institute Gallery, and Chief Curator of the exhibition. “Great chaos led to extraordinary cultural and intellectual achievements by artists who defined the soul of Chinese art for generations with their influence spreading beyond China into Japan and Korea.”

China was divided into North and South during the Six Dynasties period. The six dynasties in the South were the Sun Wu, Eastern Jin, Song, Qi, Liang and Chen. Five dynasties in the north are also included in study of this period and in the exhibition. They are the Northern Wei, Eastern Wei, Northern Qi, Western Wei, and Northern Zhou. Art in a Time of Chaos presents artwork from the Nanjing Museum, Nanjing Municipal Museum, and Shanxi Museum. Nanjing was the ancient capital of the South, and Shanxi, an ancient political center of the North.

HIGHLIGHTS
Tombs
Much of what is known about Six Dynasties sculpture comes from excavations of tombs and mausoleums, whose entrances were richly decorated with lavish sculpture. Inside tombs, archaeologists have found an array of both pottery and porcelain figurines. These sculptures – attendants, soldiers, musicians, servants, and animals – were crafted to be interred alongside the tomb’s occupants, ensuring a comfortable afterlife.

A Southern Dynasty imperial tomb yielded rich results in a 1968 excavation: a full wall with a major mural. Last year, curators at the Nanjing museum began to assemble the many bricks that made up the wall and were delighted by an extraordinary relief of the famous “Seven Sages of the Bamboo Grove.” The sages, a group of admired intellectuals, artists, poets, and musicians in the mid-3rd century, have influenced Chinese culture throughout the ages, with their counterculture writings about political upheaval and celebration of nature. A modern day rubbing of a similar brick mural in black and white reveals a more detailed look at the legendary figures.

A red and green painted frieze from Northern Shanxi, one of the most colorful artworks in the exhibition, depicts lively scenes including hunting, dancing, and enjoying wine at a banquet. The panel formed the sarcophagus of the tomb of Yu Hong, a high government official from the Sui Dynasty, whose life appeared full and complex with Persian influences.

Recently Excavated
Among the most recently excavated sculptures are a group of 10 ceramic figures, including musicians playing the qin (a Chinese zither), drums and a wind instrument, which were discovered in a Three Kingdoms (222-280) tomb in Nanjing in 2006. A stylish female figurine from the Eastern Jin dynasty (317-420) excavated in 2011, wears her hair up in a side bun, which was fashionable at the time. One of the more charming sculptures in the exhibition is a humble pottery dog from the Three Kingdoms period (222-280). A humorous inscription on the dog’s back reads, “This dog’s name is Black Dragon.”

In the South, many of these funerary figures took the form of civil servants and fashionable ladies, while in North, soldier figurines were more common. These trends speak to the differences in Southern and Northern life at the time.

International Influences
The Six Dynasties saw an influx of foreigners to China, due in large part to trade, warfare, and religion, particularly Buddhism. Monks began to arrive in China and promote Buddhism, allowing Buddhist art to flourish through the construction of temples, caves, and sculptures. As a result, there was a proliferation of Buddhist sculpture, as well as figurine sculpture of foreigners for the first time.

The head of a majestic bodhisattva, with an elegant crown of flowers from the Northern Qi dynasty (550-577) was discovered at the Huata Temple in Shanxi in 1954, where a number of carved sandstone sculptures relating to Buddhism were found.

A Persian silver plate with a hunting scene was unearthed from a tomb in Shanxi. It is thought to have been imported as a luxury good in the 6th century. The images on the plate were identified this year as inspired by a scene from the Shahnameh, the greatest literary classic of Persian culture.

Ceramics
It was during the Six Dynasties period that porcelain was first mass produced as tableware, household items, stationery, and tomb objects. In the thousand years that have since passed, porcelain remains popular and is major component of Chinese art and daily life.

Although other types of porcelain were being produced, the dominate type was a greenish glazed porcelain known as piao ci. Eventually this type came to be known as celadon, as the porcelain was traded through Asia, Europe, and the Middle East. The ongoing popularity of this porcelain’s unique color may have been due to the aesthetic taste of the time, placing great value on things that evoke the natural world, calmness, and purity. The Six Dynasties literati and intellectuals placed utmost value on the pursuit of these attributes amid their chaotic world.

Calligraphy
The Six Dynasties was a remarkable period in the history of Chinese calligraphy. Not only was it the time when a great many accomplished calligraphers flourished under the tutelage of the revered Wang Xizhi (303 – 361), it was the period when calligraphy achieved recognition as a distinct art form. A new canon emerged that celebrated individual expression, as well as the recognition of distinct artistic styles, concepts, and aesthetic theories. It is hard to imagine a more critical development in Chinese art history than the codification of calligraphy into an artistic oeuvre.

Many works from this period survive because they were carved into stone, or etched into brick. From newly unearthed works in Southern China that include stone tomb epitaph tablets, incised architectural bricks, and wooden slips once circulating like ancient name cards, it is now known that calligraphy was practiced in a number of different styles, including clerical script, standard script, running script, and cursive script.

This exhibition and related programming are generously supported by the Henry Luce Foundation, Liu Dan, the Confucius Institute at China Institute, the E. Rhodes and Leona B. Carpenter Foundation, Jeong Ok and William Carey, the Holiday Inn Manhattan Financial District, China Institute Friends of the Gallery and other individual Sponsors of the Exhibition.

Featuring scholars, curators and museum directors from China and the United States discussing new archaeological findings, and the importance of cross-cultural influence during this transformative era.

Ben Wang Lecture Series: Literature of the Six Dynasties Period
Thursdays, October 27, November 3 and 10, 6:30 – 8:30 p.m.
Senior Lecturer Ben Wang will discuss the lives and works of representative poets of the Six Dynasties, as well as quintessential texts A New Account of Tales of the World and Zhaoming’s Collection of Literary Works.

Dreams of the Kings: A Jade Suit and Afterlife Objects from Xuzhou
Opening Spring 2017

In 201 BCE, the first emperor of the Han Dynasty knighted his younger brother as the first king of the Chu Kingdom, which was centered in Peng Cheng, today’s Xuzhou, in northern Jiangsu Province. Ruling under the emperor’s protection, and given special exemption from imperial taxes, elites in this Kingdom enjoyed a lavish lifestyle. Twelve generations of kings lived, died, and were buried in sumptuous tombs carved into the nearby rocky hills. Over the years, many tombs were looted. In 1995, several intact tombs were excavated, revealing contents that testify to the Chu kings’ affluence, as well as their beliefs in immortality and the afterlife. One of the most stunning finds was an elaborate jade sarcophagi burial suit, assembled from thousands of pieces of jade, the precious stone adored by Chinese people since the Neolithic period as an auspicious material that could ensure immortality. This exhibition will feature the jade suit, examples of jade carvings, and other tomb contents that highlight how these powerful and wealthy kings prepared for death and envisioned their afterlife to come.

Founded in 1926 by a group of American and Chinese educators, China Institute in America is the oldest bicultural non-profit organization in the U.S. to focus exclusively on China. The organization promotes the appreciation of Chinese heritage and provides the historical context for understanding contemporary China. Programs, activities, courses, and seminars are offered on the visual and performing arts, culture, history, music, philosophy, language, and literature for the general public, children, and teachers, as well as for business.

China Institute Gallery, established in 1966, is distinct among the museums of New York City. It was the first in the United States to showcase Chinese art exclusively on a regular basis. Today, China Institute Gallery is New York’s only non-commercial exhibition space solely dedicated to Chinese art and is known for its innovative thematic and scholarly exhibitions, publications, and related art education programs. For more information, visit www.chinainstitute.org