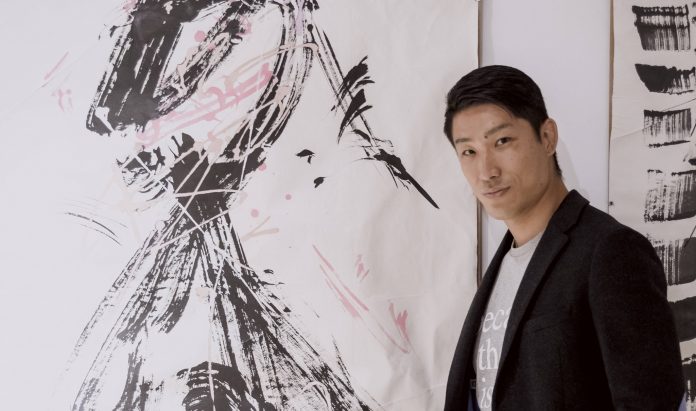 As part of his project “Connect People Thru Art Beyond Borders”, the artist Masaaki Hasegawa (Tokyo, 1987) has devised the largest calligraphy work in Europe to date. It consists of a 1,926 square meter area in the Museo Zapadores of Madrid that represents a transition process of our world from chaos to coexistence through language.

Hasegawa is interested in the abstraction of the concept of letter. Although the letter is born in itself as an abstraction of reality, its exclusive and singular use by different cultures causes barriers that have afflicted human life since the beginning of history. The concept of the Japanese artist aims to dissolve limitations of the letter as a logical descriptor of the world to propose a universal writing, in a pure way, with the vocation of uniting different cultures through the language of art.

Masaaki Hasegawa, native of Tokyo but living in Madrid, has coined the concept “Calligraphy 4.0” to designate a type of writing released from itself, whose understanding of the order of sensation and creative interpretation transcends the usual concepts of identity: nationality, language, culture, religion, generation, gender. According to the artist, living in four different countries (Japan, Australia, Israel and Spain) made him perceive the way in which languages are irreducible to each other: no translation is satisfactory, because each culture has its own way of understanding the world.

In his work, Hasegawa wonders about the role of language in the 21st century, and takes an energetic view of the forms of writing, understood as the pure expression of a single transcendent signifier. His letters cannot be read, but felt, and come from a creative dynamic in which the artist is balanced between the consciousness of totality and improvisation.

Masaaki Hasegawa is an international artist and permanent ambassador of the Contemporary Museum of Calligraphy. He is the founder of “Connect People Thru Art Beyond Borders”, a social project that aims to connect cultures by crossing the barriers of nationality, language, religion, gender and generation. His work has been exhibited in France, Russia, Israel, Japan, Ukraine and Spain. In September 2018 he created the largest calligraphy work in Europe (it was the largest in the world until November 2018). He is the author of the books “Yes, you are creative: Techniques to enhance your creativity” (2015, Spain), “New Paradigm of Creativity: From Newtonian Mechanics to Quantum Mechanics and Higher Education Development” (2016, United States), “Have Courage to Doubt What You Believe” (2017, Japan) and supervisor of “Why Global Leaders Learn from Art Today” for IE Business School (2018, Paris). He has been chosen as one of the 100 Speakers of Spain for Thinking Heads.